There comes a time at any festival, when your aching feet and pounding ears demand a little quiet respite from the catch phrases, rampaging teens, and hourly ‘Hello [insert location], we’re [insert name], are you having a good time. You’re the best audience in the world!’

Normally, you’d wander past market stalls and consider buying a studded wristband or look  the elusive ‘perfect’ skull ring however this year Bloodstock punters have a chance to see the work of Bloodstock founder Paul Raymond Gregory as well as artwork from the gamut of rock and metal. More than just skulls this promises to be a real inspirational treat for the imagination. 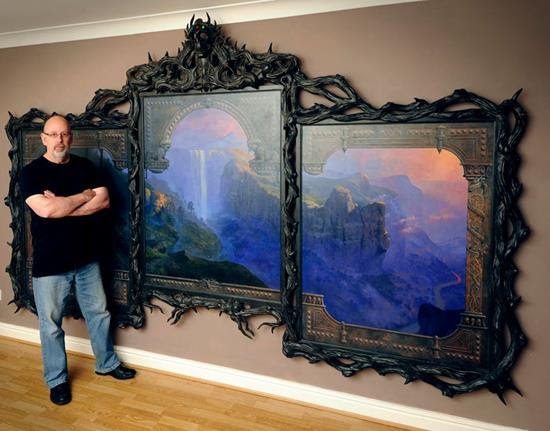 The work of JRR Tolkien has long been a favourite muse of rock and metal artists. This years’ BLOODSTOCK bands, MEGADETH, AMON AMARTH and DIMMU BORGIR all have used Tolkien references in their work, along with many others (Nightwish, Gorgoroth and even the likes of Led Zeppelin to name but a few). Now Bloodstock’s co-founder, renowned fantasy artist, Paul Raymond Gregory, is thrilled to bring the two themes together and launch a major art exhibition at BLOODSTOCK this year.

Christened the Rock and Metal (RAM) Gallery, the exhibition is to be a permanent addition to the festival and will provide a showcase for a changing selection of rock-related art and memorabilia. Paul Raymond Gregory’s extensive body of work includes many famous album sleeves and monolithic pieces inspired by the writings of JRR Tolkien. Paul’s first ever album cover commission was in 1984 for SAXON’s ‘Crusader’, so launching the RAM Gallery on the 30th anniversary of Paul’s artistic debut in the metal world is fitting indeed.

This year’s first showing will include all the original BLOODSTOCK Festival artwork, going right back to the first indoor event in 2001, plus a wide range of Paul’s album art including the sleeve of SAXON’s latest release ‘Sacrifice’. Representing Paul’s Tolkien work, there will also be a large triptych inspired by The Silmarillion opus (from whence Marillion derived their name). The painting will be mounted in a bespoke hand-carved frame created by master framer John Davis. Although John has framed much of Paul’s other work, the triptych features the first frame actually designed by Paul himself. In addition, Paul will be signing copies of his book ‘Beyond Time And Place’, which showcases artwork from the breadth of his career.

The exhibition will also include a small selection of bespoke handmade guitars created by young artist/musician Cynosure who is working to re-define the guitar, not just as a functional instrument, but as a working, playable piece of art. Paul firmly believes in supporting up and coming artists, as much as he does up and coming musicians (via BLOODSTOCK’s Metal 2 The Masses scheme).

The first BLOODSTOCK indoor festival featured a small art exhibition, but the new venture will be on an altogether grander scale, professionally hung, lit and housed in a specially constructed space of around 1300 square feet. Ultimately, it is hoped that the exhibition will be the first step on the road to establishing a new permanent rock venue with Paul returning to his roots as an artist and gallery owner in support of both art and music. The proposed site would include a live music space with bar, rehearsal and recording facilities, and a permanent exhibition space. A true hub for British rock and metal in the heart of the Midlands; the TRUE birthplace of metal.

Be sure to make time to view this fabulous exhibition during your weekend at Catton Park. Tickets are available now priced £130 (plus booking fee) for a 4-day Thurs-Sun weekend pass with camping. VIP tickets and upgrades are also available, with VIP tickets now at limited availability. Don’t miss out!
Just 6 weeks to go to the biggest metal party on the UK calender and we still have loads of entertainment and bands to announce over the coming weeks

CHECK OUT WHAT’S IN STORE FOR YOU THIS SUMMER