Glowing Fish Lead to A New Form of Light

Meanwhile, Liz Hurley champs impatiently at her Brexit bridle, waiting for that pesky triggering of Article 50 and the overdue return of her 100 watt pearl lightbulbs. Revolution? Piffle!

Glow-in-the-dark stickers, weird deep-sea fish, LED lightbulbs — all have forms of luminescence. In other words, instead of just reflecting light, they make their own.

Now a team of scientists from the University of Vermont and Dartmouth College have discovered a new way that some molecules can make a luminescent glow — a strange, bright green.

“It’s a new method to create light,” says Matthew Liptak, a chemist at UVM who co-led the new research. The new light may have many promising applications including novel kinds of LED bulbs and medical dyes “that can sense viscosity within a cell,” he says.

The discovery was reported in the journal Nature Chemistry.

To understand how this new light is formed, consider maple syrup. It’s a thick liquid. The scientists at Dartmouth, led by chemist Ivan Aprahamian, were exploring some strange molecules, called molecular rotors, shaped like kayak paddles where both blades rotate around a shaft. (Yes, a very small shaft, many thousands of times thinner than a hair). In a thin liquid, like water, clumps of these rotating molecules — a kind of dye containing boron — give off a weak, reddish luminescent glow.

But when the scientists put the molecules into thicker and thicker maple-syrup-like solvents — in this case, mixtures of glycerol and ethylene glycol — the fluorescent light from these molecular rotors didn’t get weaker as expected. Instead, they glow brightly, in a vivid green color nearer the blue end of the spectrum. 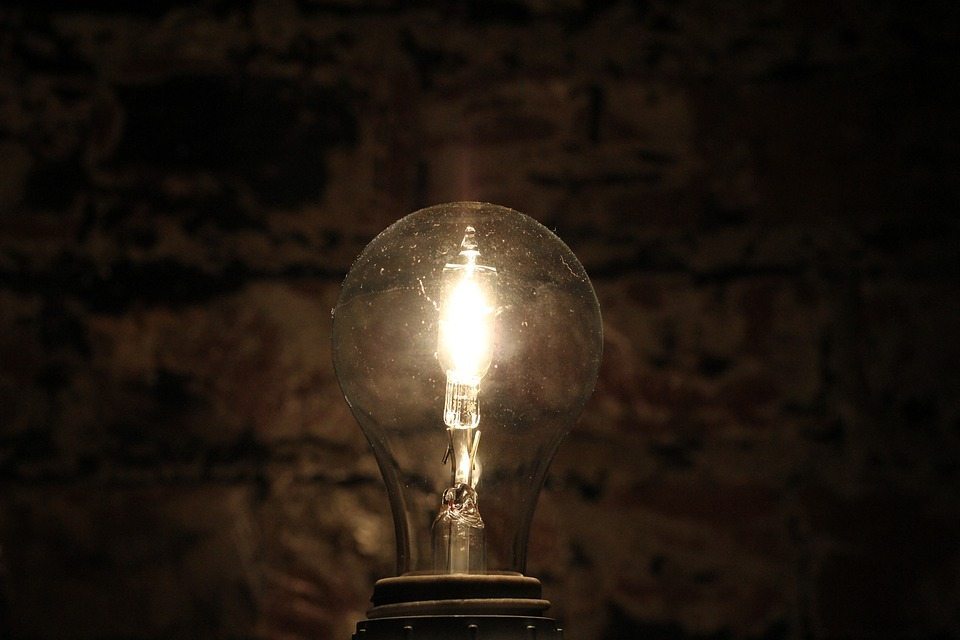 “That was very surprising,” says Liptak, an expert on computational chemistry. So the Dartmouth team turned to him and his students to explain why. As the UVM team investigated, making simulations on the Vermont Advanced Computing Core — and both teams further investigated the molecules using spectroscopy and other lab techniques — they came to an even-more-surprising discovery: the way this light was being emitted required breaking a long-standing law of chemistry called Kasha’s Rule.

“We found a new way that the universe works that we didn’t understand before,” Liptak says. “It’s an exception to the rule.”

The world has color because molecules absorb and give off light according to the “spooky” rules of quantum mechanics. In most cases, a molecule will absorb a specific wavelength of light and we will see its complement on the color wheel. In some cases, molecules “glow in the dark” by emitting a specific color of light a short time after absorbing light. This is luminescence.

In 1950, the famed chemist Michael Kasha observed that a luminescent molecule generally emits the same color light regardless of the color of light that it initially absorbed. This is because the first step following absorption of light is a molecular relaxation — a rapid vibration, stretching and release of heat — to get the molecule to its “lowest energy excited state,” Liptak explains. So when a typical luminescent molecule absorbs higher energy light, towards the blue end of the spectrum, it simply produces more heat, not brighter or different-colored luminescence. “This is Kasha’s rule,” Liptak says.

But the UVM/Dartmouth team, with support from the National Science Foundation, found that when their special rotor molecules are in a thick solution, their capacity to vibrate is limited and so they emit light before they are done vibrating. This is because the paddle-shaped part of the rotor must rotate freely in order to turn on the chemical pathway that allows it to give off heat energy — but this rotation is suppressed in a thick solution. The thicker the solution, the less the molecular paddles rotate, the more light can be emitted. Which is why the team is calling their discovery Suppression of Kasha’s Rule, or SOKR (pronounced “soccer”) for short.

“One way to understand SOKR is to think about a water slide with two outlets where one outlet is located far above the pool and the other is located at the level of the pool,” explains Liptak. “In low viscosity solutions like water, the paddles rush all the way to the bottom outlet and enter the pool without a splash. In high viscosity solutions like maple syrup, the paddles are slowed down, allowing some to spill out the top outlet creating a waterfall or, in the case of light-emitting molecular rotors, bright green light.”

This new pathway to creating light may prove useful. “The compound we found is very bright, and due to its viscosity sensitivity, may have a multitude of applications,” says Morgan Cousins, a UVM doctoral student and co-author on the new study (pictured right). 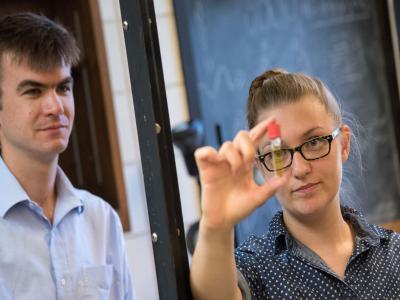 “We see uses for these kinds of molecules from industrial materials to new kinds of LEDs to biomedical imaging.”

Consider cells. The many parts within a cell — from the endoplasmic reticulum to mitochondria — have different functions, and, presumably, have different viscosities too. But not much is known about this — which is where these fluorescent rotor molecules might help. The newly discovered molecules are not safe for use in a human, but the team is currently hunting for similar “bio-compatible” compounds, Liptak says, that could be incorporated into a medical dye or other test where they would glow brightly in more-viscous parts of a cell and less in more-watery parts. The molecules could be applied as a sensitive diagnostic tool because they precisely change the amount of light they emit based on the thickness of the solution they are in.

“Viscosity is a fundamental property of biological systems that we’re currently mostly blind to,” Liptak says. But this new discovery may shine new light.

Next Story:
Building Her Own Wonderland: Yayoi Kusama at Victoria Miro Gallery