A Journey To The End Of Empire: Pt. 1 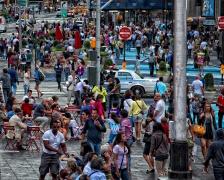 It Is Always Darkest Right Before It Goes Completely Black

"When the poet stands at nadir the world must indeed be upside-down. If the poet can no longer speak for society, but only for himself, then we are at the last ditch.”— Excerpt from, The Time of the Assassins, a study of Rimbaud, by Henry Miller.

But the raging soul of the world will not be assaulted without consequence. Mind and body are intertwined and inseparable from nature, and, when nature responds to our assaults, her replies are known to humankind as the stuff of mythic tragedy and natural catastrophe.

"When the poet lives his hell, it is no longer possible for the common man to escape it."— ibid.

But take heart. As the saying goes, it is always darkest right before it goes completely black.

Rejoice in this: Seeds of futurity require the darkness within soil to dream.

"To go into the dark with a light is to know the light. /To know the dark, go dark. Go without sight,/ and find that the dark, too, blooms and sings,/ and is traveled by dark feet and dark wings."– Wendell Berry, To Know The Dark.

What "tangible" and "constructive" things can a poetic sensibility contribute to everyday existence? Here's one: The atomized denizens of neoliberal culture are in dire need of a novel yet durable sensibility, one bearing the creativity and stamina required, for example, to withstand the police state rebuffs inflicted by the ruthless authoritarian keepers of the present order…as is the case, when OWS dissidents initiate attempts to retake, inhabit, and re-imagine public space.

if the self is not saturated in poetry, one will inhabit a dismal tower

Yet, while it is all well and good to be politically enlightened, approaching the tumult of human events guided by reason and restraint, if the self is not saturated in poetry, one will inhabit a dismal tower looking over a desiccated wasteland.

The crackpot realist’s notion that poetry has no value other than what can be quantified in practical terms emerges from the same mindset that deems nature to be merely worth what it can be rendered down to as a commodity. The trees of a rain forest can be pulped to paper cups. A human being is only the content of his resume.

The underlying meaning of this sentiment: The value of one's existence is derived by the act of being an asset of the 1%.

Resultantly, the tattered remnants of the neoliberal imagination (embodied in lofty but content-devoid Obama speechifying and the clown car demolition derby of Republican politics) spends its days in a broken tower of the mind, insulated from this reality: The exponentially increasing consequences (e.g., economic collapse, perpetual war, ecocide) created by the excesses of the present paradigm will shake those insular towers to theirs foundations, and, will inevitably caused the structures to totter and collapse.

The bells, I say, the bells break down their tower;
And swing I know not where. Their tongues engrave
Membrane through marrow, my long-scattered score
Of broken intervals…And I, their sexton slave!

We have been "sexton slave" to this destructive order long enough; its lodestar is a death star.

In polar opposition, a poetic view of existence insists that one embrace the sorrow that comes at the end of things. The times have bestowed on us a shuffle to the graveside of our culture, and, we, like members of a New Orleans-style, second line, funeral procession, must allow our hearts to be saturated by sorrowful songs.

Yet when the service is complete, the march away from the boneyard should shake the air with the ebullient noise borne of insistent brass.

"Often we're not so much afraid of our own limitations, as we are of the infinite within us."–Nelson Mandela (from an interview from his prison cell, conducted by the late Irish poet and priest, John O'Donnahey)

In this way, we are nourished by the ineffable, whereby unseen components of consciousness provide us the strength to carry the weight of darkness. Therefore, to those who demand this of poets: that all ideas, notions, flights of imagination, revelries, swoons of intuition, Rabelaisian rancor, metaphysical overreach, unnerving apprehensions, and inspired misapprehensions be tamed, rendered practical, and only considered fit to be broached in reputable company when these things bring "concrete" answers to polite dialog.

I ask you this, if the defining aspects of our existence were constructed of concrete, would not the world be made of the material of a prison?

Read Part 2 of this essay here.