We Are Waltham Forest defeat the EDL

The end of the Victoria line proved to be the end of the road for the EDL’s misguided aspirations to flaunt their imagined superiority.

Walthamstow, the end of the Victoria line, is perhaps best known for spawning a boy band who loved the place so much that they named themselves after the postcode.

One of the less prosperous parts of London, traditionally white working class but now a successful blend of many cultures; it was targeted by the English Defence League (EDL) for their march on Saturday, 1st September 2012.  The EDL, for those who don’t know, is a racist organisation which includes many ex-BNP members frustrated by the internal wrangling within that party. 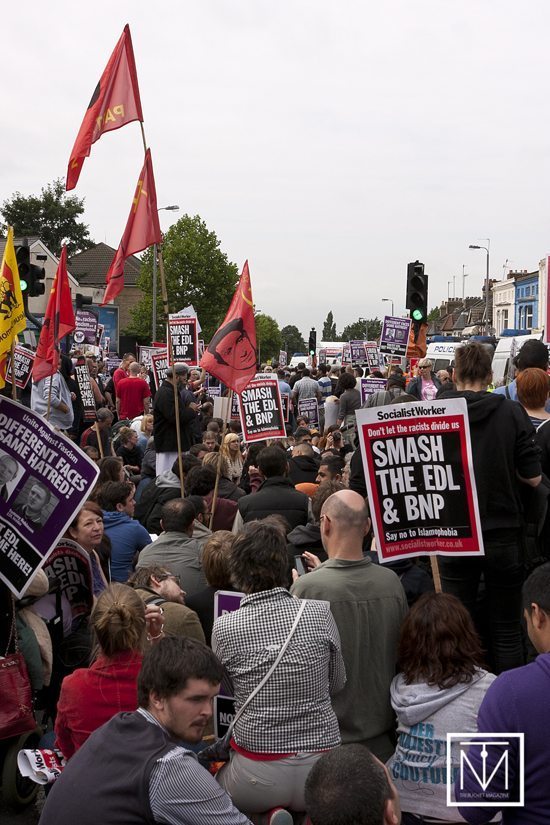 The EDL is also notable for its links with football hooligan firms, and their current modus operandi is to attempt to demonstrate that they are the master race by rampaging through ethnic minority areas, frequently resulting in attacks on mosques and small businesses as well as racist assaults.  If the BNP are Nazi thugs in suits, the EDL are racist thugs in England shirts with trainers as white as their skin.

As word of the proposed march got around, local people established a broad based campaign to oppose it, We Are Waltham Forest, consisting of community groups, trade unions, political and anti-fascist groups, notably Unite Against Fascism (UAF), as well as various unaligned concerned residents.  Social networking sites were used to promote a counter-demonstration, while EDL activists used their pages on the same sites to boast about how they were going to take Walthamstow, some also boasting about how much they were going to drink on their day trip to an area they seemed to know little about.

On 1st September, the counter-demonstration of a few thousand people assembled at Walthamstow station, listened to speeches and then made their way up Hoe Street, the main high street in Walthamstow.  This march was notable for its diversity in terms of age, sex and race.  It was not just the same old faces, not just the old-timer socialists who have attended every anti-racist demo since Rock Against Racism in the 1970s or pink-haired anarchists.

Neither was it comprised solely of the local Asian community, the focus of the EDL’s vitriol.  There were middle aged women wearing their trade union badges, a pensioner in a wheelchair, a few children holding placards almost as tall as them, local lads wearing baseball caps and Palestinian scarves, young women in headscarves flicking through copies of Socialist Worker.  At the front of the march were a group of stewards proudly hoisting up the We Are Waltham Forest banner and Hoe Street was filled with colour as placards (predominately those produced by the UAF and the SWP) were held aloft, as well as a few homemade versions, some flags and the more ornate trade union banners. There was a peaceful carnival vibe and those living above the shops on the main street looked out at the passing musical and chanting procession of unity. 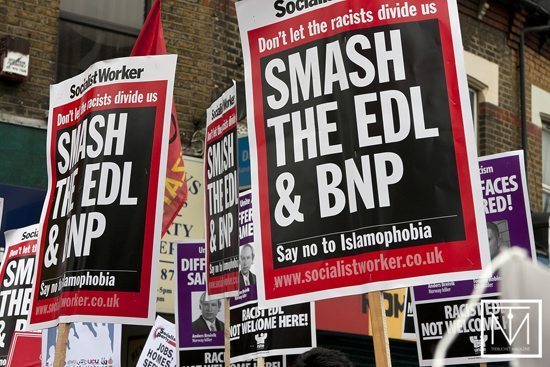 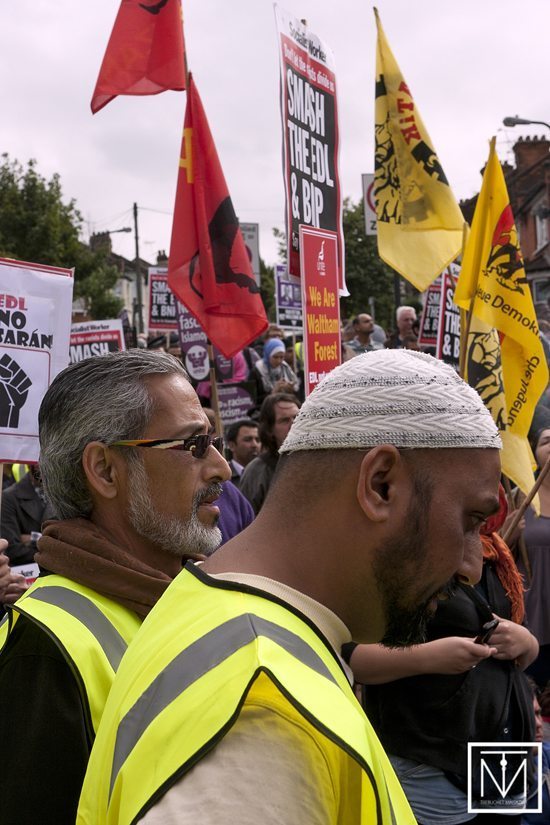 Meanwhile the EDL had gathered at Blackhorse Road station and word got through that their turnout was somewhat smaller than expected, only a couple of hundred. As the counter-demonstration reached the junction of Hoe Street and Forest Road, the protestors started to sit down on the road to block the way and prevent the EDL from marching to outside the Town Hall, where they had planned to have their rally.  At first it appeared that the police were going to divide the road into two with their vans and police line, however it soon apparent that this was not feasible and so the EDL were, embarrassingly for them, diverted down side streets where it is reported that they were mocked by locals.

In anticipation of being kettled by the police, a number of anti-racist protestors diverted themselves down other side streets and went to greet the EDL at their final gathering point.  The remainder of the counter-demonstration were indeed kettled for some time, although there were no scuffles and the atmosphere continued to be good natured, with stewards handing out free bottles of water. 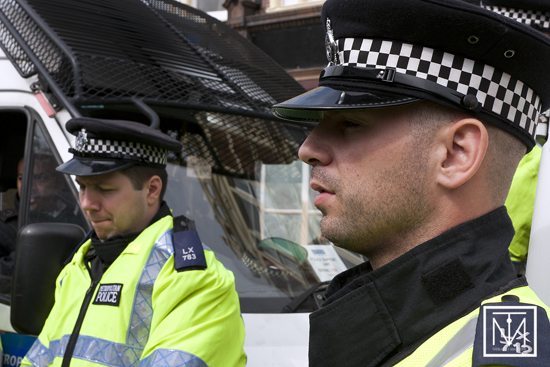 Through the use of smartphones, news spread that the EDL rally had been a washout, outnumbered by the small breakaway group of anti-racists jeering them.  Their leaders Tommy Robinson (real name Stephen Yaxley-Lennon) and Kevin Carroll had ended up in a blazing row following their disappointment and frustration, while their members were contained around the corner. 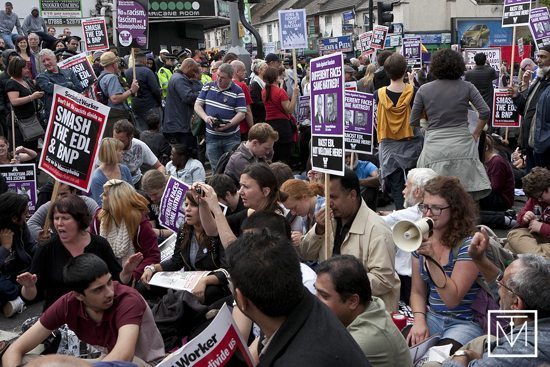 The so-called master race was not feeling very masterful.  Later there were arguments and recriminations with some EDL members even asking their leadership for their travel money back and their own supporters posting on social networking sites to describe the organisation as a laughing stock.

The end of the Victoria line proved to be the end of the road for the EDL’s misguided aspirations to flaunt their imagined superiority.

Unbelievably they have decided to try again on Saturday, 27th October.  The far Right are in disarray with Nick Griffin, the BNP leader, posting a video on the internet criticising Tommy Robinson and describing the EDL’s decision to try again as “a wet dream for the reds” bound to end in defeat and further humiliation for the EDL.

Again, UAF and We Are Waltham Forest are organising a counter-demonstration against the racists.  Be there.

4 Replies to “We Are Waltham Forest defeat the EDL”