A completely civic initiative, without any backing from government and/or organizations affiliated with political parties 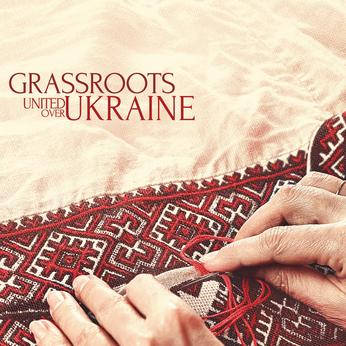 [dropcap style=”font-size:100px; color:#992211;”]N[/dropcap]o matter how worthy the cause, charity albums often have a slightly sad air — filled with token offcuts and rejected tracks, as if the phrase “does a lot of work for charity” weren’t now entirely tainted (at least in Britain).

So it’s always pleasantly surprising to encounter one that doesn’t try to make its point at the expense of aesthetic standards.

Many in the West have taken the protests and the developing civil war in Ukraine as a pretext to take sides in an alarmingly simplistic way, as if the situation isn’t much more complex than outsiders can easily grasp. [quote]all tracks are exclusive to this release[/quote]There’s been no shortage of commentators eager to overlook excesses or sinister forces associated with both sides in what’s even been characterised as the first proxy war between the power blocs of Oceania and Eurasia (or at least between Russia and NATO). A divided country caught up in the intrigues of meddling outsiders can be a harsh environment for civil society in general and of course for musicians, and this avowedly non-political compilation seems like a constructive civic response to very adverse conditions.

Organised by techno promoter Igor Glushko and others involved with the Ukrainian electronic scene. Profits go to the Maidan Family Fund, which benefits those injured in the recent Kiev protests and their families. It works both as an overview of Ukrainian artists (on the first CD) and as a selection from international artists who’ve played Ukraine previously (on the second CD). In both cases, all tracks are exclusive to this release. Ranging from electronica to downtempo to more full-blooded techno, this is a varied compilation that gives an insight into one of Europe’s long-standing but lesser-known electronic scenes. Showcasing it exactly at this time acts as a strong statement of belief in its continued future.

Codex Europa spoke to Igor Glushko about the project.

Who is behind this project?

A group of Ukrainian people who have nothing to do with politics. This project is a completely civic initiative, without any backing from government and/or organizations affiliated with political parties. This group (myself included) is responsible for both funding and implementation of the project.

How did you select the artists for the compilation? Did you approach them or they you?

Of course, it was us who approached artists in the first place. We wanted to bring together tracks by prominent Ukrainian electronic artists (most of whom we are acquainted with) and some international artists who have played in Ukraine. We got in touch with people who could fit the idea sound-wise and who we knew how to get around with.

How many of the foreign artists already had a strong connection with Ukraine? (playing or releasing there?)

All of the foreign artists involved have played in Ukraine at some point. Some of them more than once. Apart from that, I don’t think any of them have had any strong connection with our country. Nevertheless, they were kind enough to give out their tunes for a noble cause.

How are Ukrainian clubs, artists and labels coping with the current situation?

I think, Ukrainian artists and labels (at least those who are associated with the kind of music we’re referring to right now) are not that dependent on the local market, hence the only way they are being pressured is psychologically. With clubs it’s more complicated, as they are facing a more difficult financial situation (if compared to 2013) in an environment where their audience is used to a certain level of service and does not treat the venues indulgently.

It has to be said that financial difficulties affect the audience too: people are becoming less solvent. For instance, clubs in my native city of Kiev are forced to tighten their budgets, but in other cities it is even more complicated, as people are reluctant to be spending money on entertainment. In areas affected by the crisis most of all (i.e. Donetsk and Lugansk) there’s nothing going on at all at this point, obviously.

Are Ukrainian artists starting to produce creative responses to what is happening?

Definitely. National themes are becoming this season’s main trend. I’ve seen many pieces of modern art and commercial merch items that tend to be based on recent events and Ukraine’s national background. Music reflects the same tendencies too, but I’d say electronic scene is less affected by this trend.

Are any of the local artists based in Eastern Ukraine?

Only Stanislav Tolkachev and Subforms are based in Eastern Ukraine, Dnepropetrovsk area particularly. Fortunately, this particular region seems to be the calmest one on the East side, so no harm was caused.

Next Story:
Searching for Dirty Aliens