Comrades in arms separated by the melanin in their skin. Sterling Carter visits the war graves of Mbare, Zimbabwe.

[dropcap style=”font-size:100px; color:#992211;”]M[/dropcap]ention the name Mbare to an upper-middle class resident of Harare, and the reaction you get will inevitably be one of, “Why would you ever want to go there?”

It’s got a reputation, and it’s not a good one.

Garikayi “Oscar” Makuyah hopes to change that. He used to live and work in Johannesburg, leading bike trips into some of the city’s townships and destigmatizing areas known for high levels of crime and poverty. He recently returned to Harare and is looking to do the same for his home city. It’s an uphill climb, but the view from the top could change the way people live in the long-neglected neighborhoods. 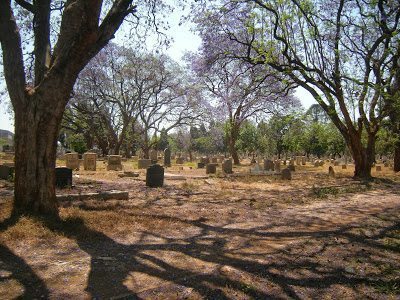 A view of Pioneer Cemetery.

Mbare is the oldest township in the country. It was founded in 1907 as the English settlement of Salisbury began to expand. As the growing city industrialized, men from the rural areas and as far afield as Mozambique, Zambia, and Malawi began to settle in the quickly expanding suburb of Hariri, a name that the capital later took for its own upon independence.[quote]the market is a hive

generating millions in the

The Rhodesian government built male-only hostels in the 1940s to accommodate the growing population and corral their labor force. These still stand, their brick and concrete exteriors chipped and cracked, their windows missing, broken, or rimed with dirt. People crowd around the doors and open landings, taking refuge on cool concrete shaded from the midday sun.

Mbare still houses one of the country’s largest produce markets, a reminder that locals used to provide most of the city’s fresh vegetables long before white farmers dominated the agricultural landscape. The local flea market is the biggest in the city, selling second-hand clothing and other goods. Its name in Shona, Mupedzanmho, means “the finisher of all problems.”

It’s the last, best stop for all your fashion needs. More importantly, the market is a hive of activity, potentially generating millions in the informal sector. “It’s a multimillion dollar environment,” says Oscar. “But no one knows, as everything is liquid. It’s just cash flowing in and out.”
[quote]Comrades in arms

melanin in their skin[/quote]
The township was founded on the edge of town, lying next to the cemetery, the abattoir, and the sewage works. The cemetery is still there, graves dating from the 1890s still stand, though their occupants are unknown, the copper markers stolen for scrap long ago. The untended plots uncover the history of a city divided by race.

The English, Indian, and Jewish graves are segregated into their respective neighborhoods, while the Africans occupy an empty field. “They couldn’t afford gravestones then, so it’s basically one mass grave. They just buried people on top of one another,” Oscar told me. “You can see how big the cemetery is, and then you think about how many more Africans there were. Who knows how many are buried there.” 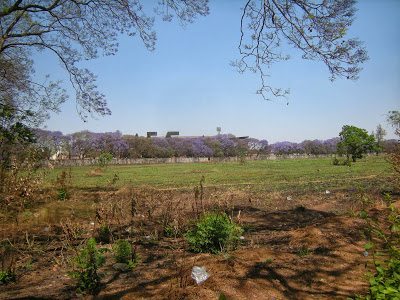 The plot of land where Africans buried their dead.

Rhodesia was still a member of the Commonwealth during the World Wars. The graves of the fallen have their own designated space, but even in death, race segregates the soldiers. White soldiers are buried hundreds of meters away from the blacks and the coloreds. The latters’ shared space is subdivided as well, blacks on one side, coloreds on the other. Comrades in arms separated by the melanin in their skin.

The soldiers’ graves are the only ones that have been maintained. The Commonwealth pays for their upkeep. All throughout the rest of the cemetery, weeds choke the cracked and broken tombstones, plastic and trash blown from the township litter the pathways, and it is clear that some of the mausoleums are used by the homeless for shelter from the elements. In Harare, the ancestors are neglected. 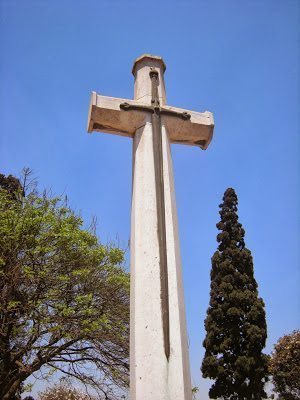 The Sacrificial Cross – A Memorial to Commonwealth Soldiers 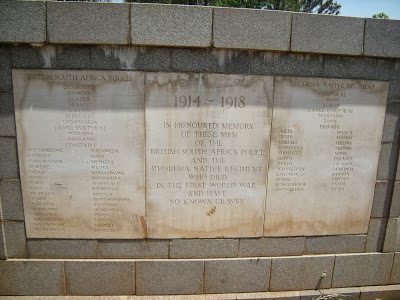 Turning from death, Oscar and I visited the Mai Musodzi Community Center.

Mai Musodzi was an African feminist in the early 20th Century. If there’s ever a woman who deserves more attention, it is one of the pioneer black feminists fighting both patriarchy and racism in one of the British Empire’s white settler colonies. She believed in women’s empowerment through what today would be considered “income generating activities.”

She organized sewing and knitting classes as well as training for nurses to work for the Red Cross. She pushed for women-run maternity wards in the city as well as registered marriages to protect women’s rights within a relationship.

These were especially important goals in Mbare. The township was never conceived as anything more than a workers’ ghetto, a place to house men to labor in the factories and other value added industries serving a burgeoning agricultural sector.

As women moved to the urban areas following husbands and fathers, the Rhodesian government realized that it could use this migration to their advantage, employing women as nurses, domestics, and other professions commonly devalued as “women’s work.”

Today, Mai Musodzi’s name still graces the community center, which is now mostly used for weddings and other large functions. Out back, however, it also houses the Shukokai Karate Club. 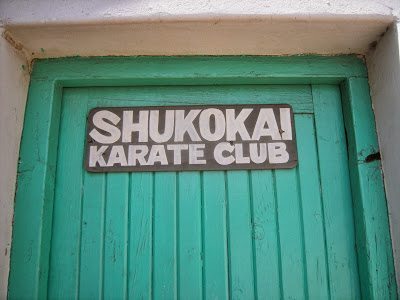 Behind this door…lies another door.

We were met by Glover Musariri, a stocky but powerfully built man in his early forties. He is the leader of the karate club and has been practicing his art for more than thirty years. “I was three or four, and I really liked the movies of Chuck Norris and Bruce Lee.” At the age of nine, he joined the club and trained in the Shukokai style under a white instructor who now lives in Durban. 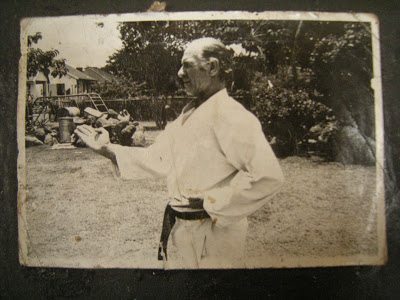 He has about thirty to forty students, but his star pupil Brian Kupara is his pride and joy. At the age of 26, he has traveled throughout the region, earning twelve gold medals from various competitions. Glover used our presence to kick him around a little, ostensibly showing us several techniques while giving his pupil a bit of a hard time. 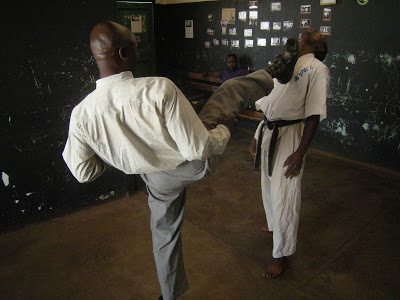 I’ve met kids playing at karate all over Africa, but I’ve never met one who took it past play. I have to admit; even I spent many summers ‘practicing karate’ with the neighborhood kids, which essentially entailed beating the crap out of one another for hours on end. To actually commit to the discipline and continue to practice for years after was outside our realm. If Bruce Lee ever knew the affect he had on kids around Africa, or even on this one man, I’m sure he would have sprung for a goodwill tour across the continent. 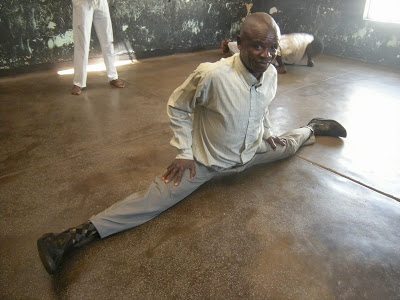 Who could resist? Also…. Hey ladies!

This is the first of a two-part entry on Mbare. The township has a life of its own that is virtually unknown to the majority of Zimbabweans. It has its own characters, its own history, its own culture. More than anything, I wanted to experience more of this culture – to visit one of the hostels, to drink at the local bars known colloquially as shabeens.