A
re all female rock groups just bait for male financial attention? Does a band indebted to AC/DC have any musical credibility? Can we take them seriously?

Claire (Cunningham, vocals) and Filippa (Nässil, guitar and songwriter) are climbing over the Game of Thrones guitar throne with glee.

‘We have to get a picture of this!’ Claire beams.

Thundermother, formed by Filippa Nassil in Sweden aiming to play straight-ahead rock and roll, have been a home to many musicians before settling on a line-up that features the impressive (and very Irish) Claire Cunningham. They’re excited by their video ‘It’s Just a Tease’ – a song that presents a chilling moral tale of a man who believes he has attained a woman’s affection with gifts and pleasantries, but is left desperate when she spurns his favours.

FILIPPA: It’s a bit of a Tarantino style video. (The straight guy) is actually a real rocker in a famous band in Sweden. He had to take out all of his piercings for the first time and everything.

CLAIRE: Yeah Georgia had kinda written out the idea behind it and we thought, yeah this is great. Then we all agreed. We were going to go with a different company and then that fell through, so then the label were like ‘ok we have this budget so let’s go with these guys’ and they were great. 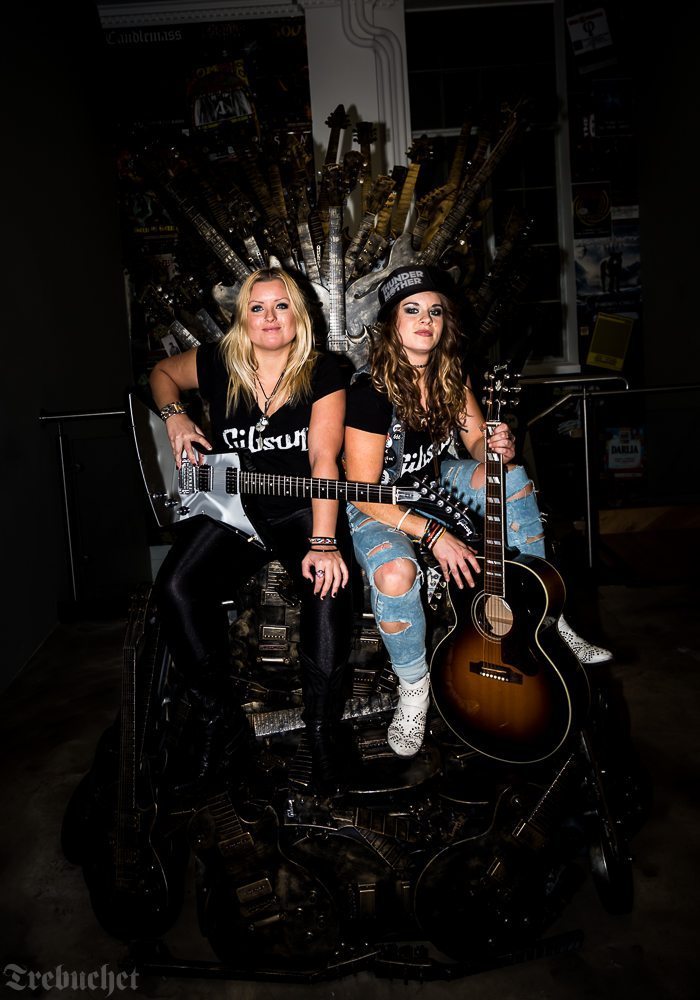 FILIPPA: And then we had a big fuck up party after the photoshoot. So all the guests had free beer at the bar. We paid the bill and then just played some pool and stuff. And, erm, they just filmed us.

FILIPPA: Yeah and then when they left for the afternoon, then they continued on. Through the car scene and the girl and everything.

CLAIRE: We had just left at that point.

Trebuchet: You guys are probably influenced by classic rock like AC/DC, I suppose the subject matter could be seen as slightly sexist.

CLAIRE: We turned it around.

FILIPPA: Flipped it. That’s what the Tease is, just a reverse rock and roll song.
Well, its just like you want to tease a guy, maybe guys, but you don’t want more than that. You just want them to buy drinks for you basically. [Laughs]

Trebuchet: Is that very important to you to have that classic warm rock n’ roll sound?

FILIPPA: It was very important to have that sound because it creates another sound.
You know, if you just take mixing desks, you hear the difference on different desks. Same fucking amp.

Trebuchet: Have you tried digital?

FILIPPA: Yeah, I’m an educated producer. I’ve tried it all and nothing beats it.

CLAIRE: Especially if you want a raw rock sound. Yeah. And especially when you’re recreating a 70’s vibe. Of course it make sense.

FILIPPA: When we go out and play I can make any good sound on a Peavey amp or whatever, I can find something I can play on, but it’s much more fun to have a classic badass amp.

Thundermother as a band

Trebuchet: Is Thundermother a concept band in a sense?

FILIPPA: Yeah because that was the concept from the very beginning. We want to do this Rock band. I told everyone that entered the band that this is the vision – do you like it or not? 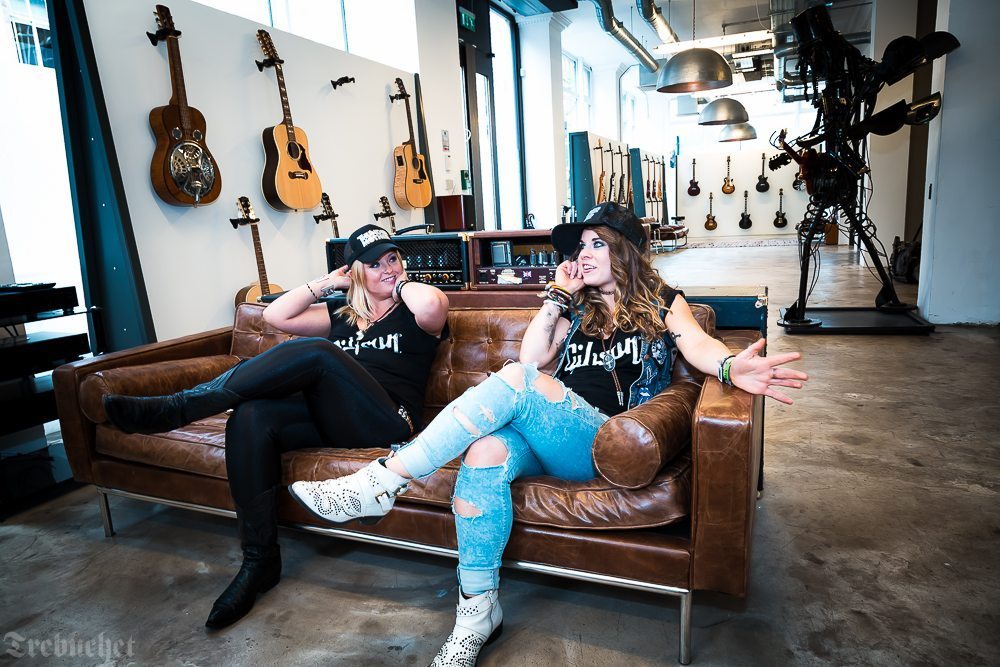 I had the band, but I was the only member, so I was saying to everyone I have a band called Thundermother. I talked to this girl about making a logo. And then she said ‘do you want me to play guitar?’ So then Torres was in the band and she’s also a graphic designer which is great. Everyone has different tasks to do. Which is good ‘cos it costs a fortune you know! I also studied music videos and stuff and I like the do it yourself thing.

CLAIRE: So that’s how they formed and then you went through a few different members, including males. People think the concept was always females, but it wasn’t originally.

FILIPPA: It is for everyone who knows us because we recorded the albums, so fans don’t give a shit about what happened before. But I had a long wait until the first album before creating the band.

Trebuchet: Your press release says you went through numerous ordeals with auditions. That sounds like it was tough

FILIPPA: It was tough. It’s changed my life.

Trebuchet: Are you stronger because of it?

FILIPPA: I am. It was horrible. I had to go to band therapy at one time. We were in therapy as a group session. It was such bad vibes in the band. Everyone hated each other. Clashes of personality, I wasn’t straight with the vision, they tried to change the vision I had, and then we started fighting. It got worse and worse and worse and worse. I was so, like, kind. I couldn’t say it properly what I wanted. So I’m much more strong now and say how I want things and it’s much better now.

With these girls I was straight from the beginning and now it works. It’s my fault what happened before, probably.

Trebuchet: Yeah, sometimes I guess it’s quicker to be upfront than try and have the…

CLAIRE:  have the roundabout way of tiptoeing.

FILIPPA: We were already a big band in Sweden when I found Claire. I found her on YouTube.

FILIPPA: And I asked her to join the band on vocals.

CLAIRE: Err, I think it was AC/DC, ‘Highway to Hell’. Just an acoustic version.

FILIPPA: You have to check it out. It’s so fucking awesome.

CLAIRE: I literally had no, I was actually living in Cardiff in Wales and I had no YouTube channel, not even wanting to do one cos I was busy – it was literally like seven nights we played, so we were like, we’d better get something up on YouTube. We recorded something like 39 videos in a few hours and it happened to be one of the ones Phillipa came across, but literally one month before she called is when we put them up.

Thundermother and being women

Trebuchet: I suppose in the music industry, or certainly to some of the fans, having an all girls group is a gimmick, it’s a selling point in a way. People might say it separates the concept of the band from the music. What’s your impression of that?

FILIPPA: At first it’s a selling point. But the second point is that people forget we’re girls when they’ve seen us, so that makes us even better. You know what I mean? Because it has a better ring to it. They think maybe we can’t play or whatever. Then they see us and we play better than most guys do and we’re a great rock and roll band. Then they’re really excited about us

Trebuchet: So you embrace it?

CLAIRE: Of course. Look, you’re going to get the people who are going to be disrespectful and say this, that and the other, but at the end of the day.…

FILIPPA: we think they haven’t seen us. Its only on the internet. We get a lot of shit online.

Trebuchet: Do you witness people defending you online?

CLAIRE: Oh god, it’s ridiculous. And then they have these long conversations on YouTube on a video and you just think, why do they bother?

CLAIRE: And then you get people who stick up for us. And it’s nice. We don’t read comments a whole lot. Who’s got time? You might come across one every now and again and laugh and whatever. There is respect, of course. There’s more respect than there is disrespect, if that makes sense, but there are the odd one or two unwarranted comments.

FILIPPA: There is a lot of respect and I never see the disrespect. We get so much respect but we get jealously too. So that what I have seen. I hear many bands say if we weren’t all girls we wouldn’t be famous. Something like that. That’s jealousy.

FILIPPA: …because we worked our asses off to get here.

CLAIRE: ‘You’re only where you are because you’re girls’ …pffft. I mean, if you can play guitar as well as Phillipa can… [Laughs].
Look of course, at the end of the day we are five females. It is gimmicky, and if you put two bands together people are probably going to be more interested in the female version because it’s unique, it’s a selling point, but like you said, it’s a hard road. And it is a hard road. We get a lot of flack.

FILIPPA: And then in Sweden 2-3 years ago we didn’t have a contract. So hard work. We had queues outside pubs before we had a record contract. 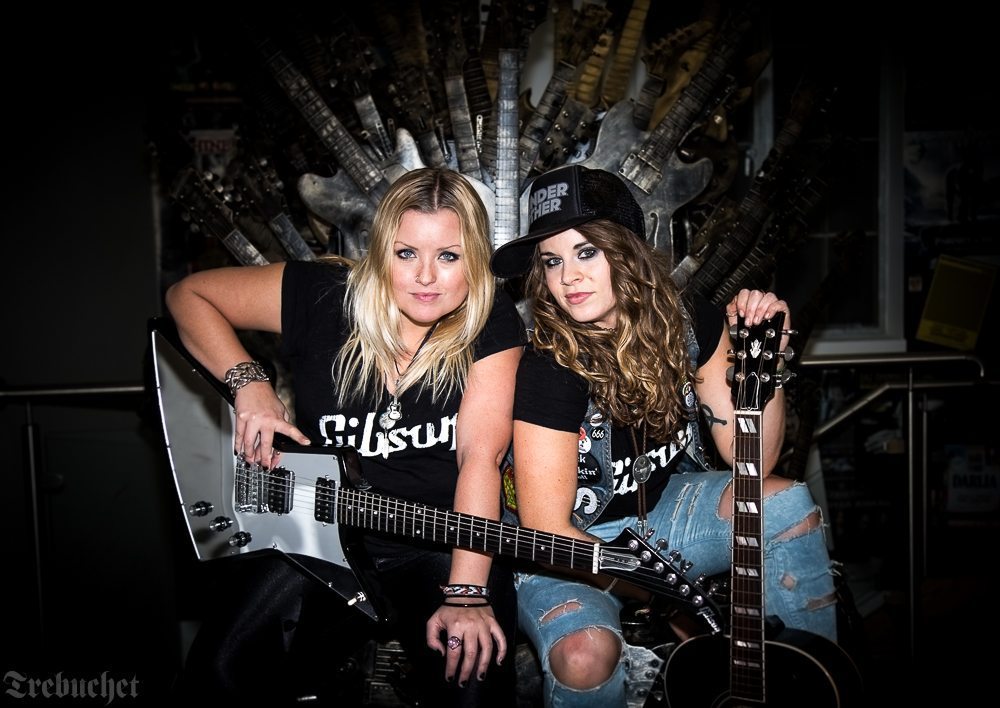 CLAIRE: And I like that. With us, its not like you’re X Factor. They just got given it on a plate.

FILIPPA: It’s tough for us, especially with all the lineup changes. It’s a really long wait. So now to be doing things is great.

CLAIRE: But you know what, I think the struggles and the hardship has made it more solid, for you especially. Especially us two, music has always been everything since we were kids. It’s literally nothing else but music. Anyone who knows us or knows us personally knows how much we’ve worked for it.
We prove ourselves again and again – festivals ask for us back. We’re getting the gigs. We’re getting the shows.

FILIPPA: People always want us back. People remember our show.