A Battle of Wills, and Bowels (The Smuggler)

An outlandish premise, played with subltety, The Smuggler teases unlikely laughs from the basest of subjects. Review

[dropcap style=”font-size:100px; color:#992211;”]W[/dropcap]
hile its central premise – a detained drug mule withholds the evidence by not defecating for days – may reek of toilet humour, The Smuggler’s excellent writing and direction successfully meld thriller elements to make for a surprisingly rich black comedy.

Impressive, given that the film is a first-time feature for directors Angus Sampson and Tony Mahoney – more so for Sampson, who also co-writes (with Saw’s Leigh Whannell) and stars.

Ray (Sampson), a TV repairman, is one of life’s underdogs. Still living at home with his doting mother and emasculated stepfather, he’s a loner, put upon at work by his fried-chicken-munching boss, and picked on by sneery teammates at the local football club. Naive and not the brightest, he’s easily manipulated by his peers, and so it is that Ray finds himself agreeing to smuggle a kilo of heroin from Bangkok back to Melbourne. As he himself predicts beforehand, he is “no good at it” and is swiftly taken into custody to begin a physically gruelling battle of wills.

Initially there is no particular reason to root for Ray. Harmless though he is; the inability to say no is what got him into this mess, so the likelihood of him standing up to federal police is slim. It’s therefore a pleasant surprise when Ray takes on the traits of his smuggling namesake and refuses to give in. Herein lies the charm of The Smuggler. Ray has been disrespected his whole life, and now, backed (up) into a corner, his initial buoying by codeine makes way for the strength and motivation to prove he’s underestimated. It’s an unusual psychological journey from mummy’s boy to fearless lawbreaker, leading to a satisfying climax that has us rooting for him. 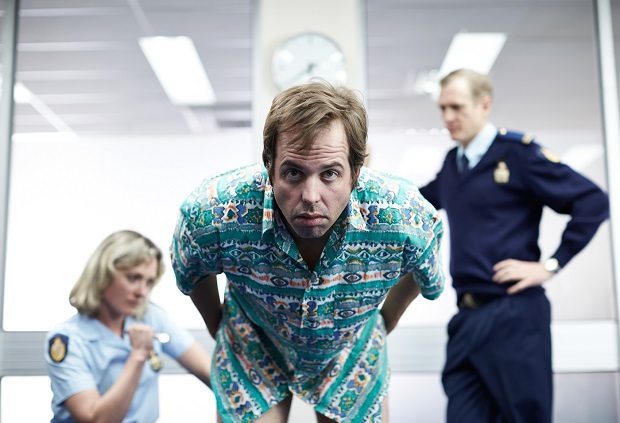 In the hands of lesser actors, The Smuggler would drag, the lead largely confined to a hotel bed as he is, but Sampson is excellent as our severely constipated antihero. Brilliantly conveying the dull disconnection of his slightly dim-witted character, he takes a difficult part and adds a convincing nuance by choosing to play subtle over hammy; it’s a pleasing juxtaposition to the outlandish premise, that elevates the film from slapstick. Hugo Weaving is the cherry on top, chewing the scenery as a snarly cop.

While the film will not be to everybody’s taste – certainly not Ray’s, in one particularly excruciating scene – The Smuggler has a lot of heart as a classic story of the everyman versus the powers that be. The fact it plays alongside the backdrop of 1983’s America’s Cup yacht race, which saw Australia defeat the States’ long-running title, is a neat parallel.

Previous Story:
Give Me Fifty, or I’ll Give You Zilch. Workplace wellness gets nasty