the closest planet pairing of 2014 — and not just any planets, but the two brightest ones: Venus and Jupiter 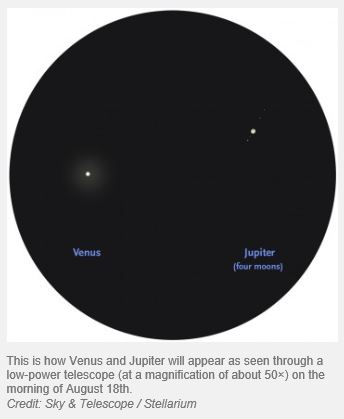 If you’re willing to rise before dawn on Monday, August 18th, you’ll be rewarded with the sight of the closest planet pairing of 2014 — and not just any planets, but the two brightest ones: Venus and Jupiter.

On that morning, these two worlds will form a striking “double star” low in the eastern sky. They will appear only 1/3 degree apart — a bit tighter in the eastern U.S. — close enough for both to be easily covered by the tip of your little finger at arm’s length.

You can start watching for Venus and Jupiter after they’ve cleared the east-northeastern horizon, as early as 80 minutes before sunrise, but that early you’ll need a very flat horizon unobstructed by trees, buildings, or hills. The best views will probably be from 60 to 30 minutes before sunrise, depending on how clear the air is, when the planets will be not quite so low.

As close as this conjunction is for early risers in North America, the pairing will be even tighter for skywatchers in Europe. From there, Venus and Jupiter will appear just 0.25 or 0.2 degree apart, about half the width of a pencil held at arm’s length.

The two planets’ tight tango evolves over several days. Venus is sinking in the predawn twilight, whereas Jupiter has only recently climbed high enough in the sky to be seen before sunrise. On the morning of August 15th, they’ll be about 3 degrees apart. Each morning thereafter, Jupiter rises a little higher and Venus sinks a little lower. The distance between them shrinks until the morning of the 18th, when they’ll appear closest together.

After that, they’ll gradually separate. By August 23rd they’ll be 5 degrees apart (with Jupiter now higher), and on that date the planet duo will be joined by a razor-thin waning crescent Moon to their right.

Rarely do planets appear to approach each other this closely. Although these *conjunctions* of Venus and Jupiter occur about once a year on average, they vary considerably in visibility and separation. Some happen in daylight, while others are wide misses. These two planets have not paired this tightly in 14 years, and have not done so while in good view for 15 years. The next Venus-Jupiter conjunction occurs on June 30, 2015, though their separation will not be quite as close.

Around August 18th, Venus will appear six times brighter than Jupiter, even though its diameter (7,521 miles) is less than 1/10 that of Jupiter (86,881 miles). That’s because Venus is closer to Earth (150 million miles compared to Jupiter’s 580 million miles), and also because Venus is much closer to the Sun than Jupiter is, so its clouds are lit much more intensely.

The View Up Close

Binoculars will make it easier to spot the two planets, especially as dawn twilight brightens. If your sky is still dark enough, use the binoculars to look for a loose concentration of faint stars (called the Beehive Cluster) positioned just above the paired planets.

Even the smallest backyard telescope will show a dramatic view. Both planets will fit with room to spare in the same low-power telescopic field of view. Blazing Venus mimics a tiny full Moon; Jupiter, appearing three times wider despite its great distance, is accompanied by its four brightest moons, neatly aligned in a row.