Mosaic sculptor Takako Shimizu explores the other facets of Glass.

It’s clear that while glass heats to a liquid state and cools to become a solid, something of its liquid nature always remains. Artists feel the connection between Glass and water: both have a fluid transparency and allow reflection, internal and external.  It’s pretty and pleases the eye, but has this norm become staid?

It is important to note the distinctions between Art Glass, Glass Art, Studio Glass and mosaics, as each field is governed by its own forms and doxa. The challenge and reward in works like Shimizu’s is in defining its location amongst these various fields. It gives us a new perspective on glass as a medium of expression. 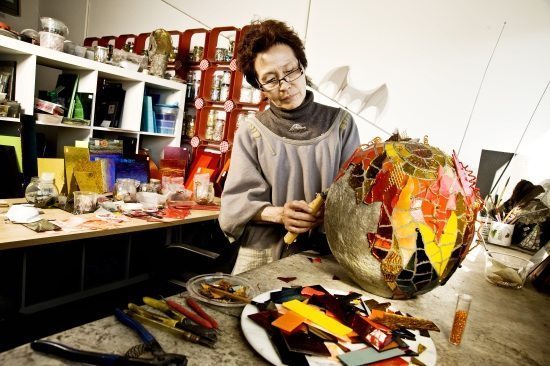 Glass Art is usually the easiest to define, being characterised by large scale one-off pieces exhibited in public spaces.  In contrast to this is Art Glass, which describes smaller pieces suitable for private collections created in a series. The emphasis here is on ‘art’, meaning conceptual rather than strictly decorative, although this disputed by some sources, which define Art glass as everything made of glass that isn’t utilitarian. Decorative glass works, whilst artistic, are said to be Studio Glass. These are created in batches and may be more mechanically produced by groups of people rather than individuals (i.e. Studio). All that said, in the contemporary world these definitions are highly transient and may be more appropriate appellations for the marketing of a particular piece rather than the artist’s intentions, method of production, or even utilitarian function.

Shimizu’s work… contains as much humour as technical mastery 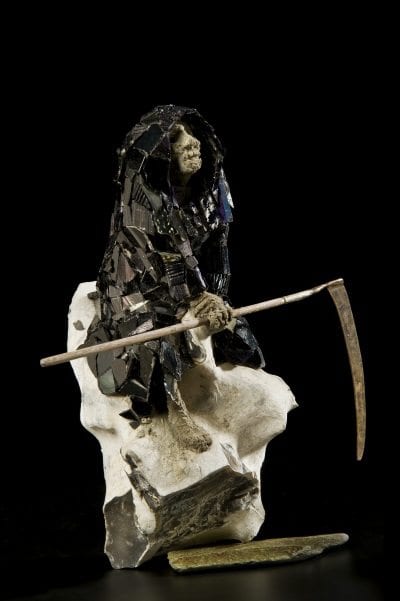 Mosaics are primarily known as a decorative art that features an assemblage of pieces describing a larger visual whole, traditionally using pieces of glass or ceramics to draw an image on a two dimensional surface. Over time this has progressed in method and materials to include a variety of different styles, methods and surfaces. Contemporary mosaics are experiencing something of a resurgence where the boundaries of mosaic art are being pushed towards more Avant Garde and conceptual realms.

Takako Shimizu’s work describes itself as mosaic sculpture and, influenced by Niki de Saintphale’s lyricism and exuberance, contains as much humour as technical mastery. In contrast to much mosaic work, Shimizu creates three dimensional objects (sculpture); a significant shift from depicting forms through two dimensional representation to actually creating the object itself. 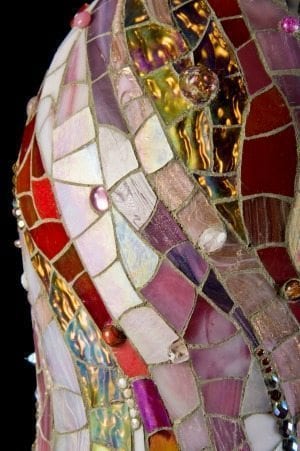 Her work is not a description of something so much as an entity in itself. The character of her pieces are complimented by the textures and variety of material she uses in their construction, to an extent not usually seen in mosaics or sculpture (which, by and large, favours single materials).

This variety adds a depth of detail that encourages much more than decorative analysis of the work, allowing for emotive discussion and appreciation. In the work Waiting (1998) the reaper’s cloak is shown to be deep and mysterious by a myriad of glass facets, textured to create a play of light and shade that is more fascinating than frightening. It might appear glib to assume that the figure  represents death, given Shimizu’s Asian heritage. However, her other work references aspects recognisable from Western culture. Whether this consciously adds a dimension of exogenous cultural meaning is not entirely clear, as what comes to the fore isn’t cultural critique but a narrative aimed at universal experience.

Just as Niki de Saintphale used elemental figures to convey primary emotion, Shimizu works in a similar space. However, the smaller scale of her work allows for a greater subtlety. In the case of Waiting the eroded face contrasted with the sharp black cloak creates a deep pensive element that plays with, rather than declares, the subject matter.  On reflection, the viewer is drawn to Shimizu’s pieces as characters in a story rather than as topical pronouncements. This brings to mind the historical role of mosaics to express cultural parables in religious spaces and memorial sites.

The stories displayed by Shimizu do not reflect the stories of groups of people, but are individual templates where, if the traditional mosaic themes of power, place and sacrifice are present, they exist in context of the viewer only, not in shared history.

The assemblage of vitreous glass, ceramic tiles, beads and mesh that make up the speeding head of Shooting Star (2002) displays Shimizu’s skill at composition and detail, expressing the exquisite whimsy characteristic of much of her work. However it is the tail rather than the face which captures the imagination. 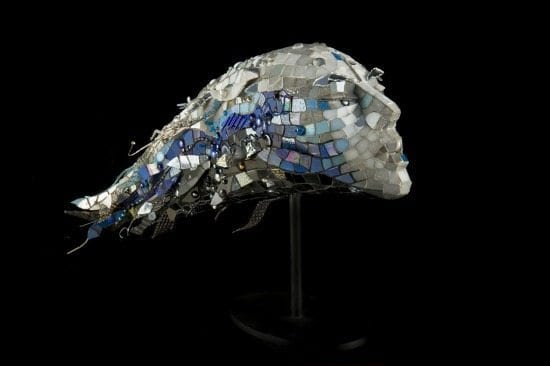 Shimizu says that she is becoming drawn to abstraction more than figurative work, and it is in the tail of the piece where we see how her composition of lines and texture work together to present the flow of pieces as one continual visual subject. The use of tiles to express gradations of colour and palette is particularly well executed, and coupled with the overarching theme finds a balance between the abstract and figurative that she was to develop further in Squid (2006) and Octopus (2006). Her later pieces, Joy (2010) and Ball of Fire (2011) display how Shimizu intends to proceed towards greater abstraction. These elemental themes are expressed with more complexity, the textures and movements more expressive and involved, leading the viewer into a deeper journey than her earlier, perhaps simpler, works.

the less-recognised, more unusual, and potentially challenging characteristics of glass: it breaks, its sharp edges refract light. It is, in short, not fluid 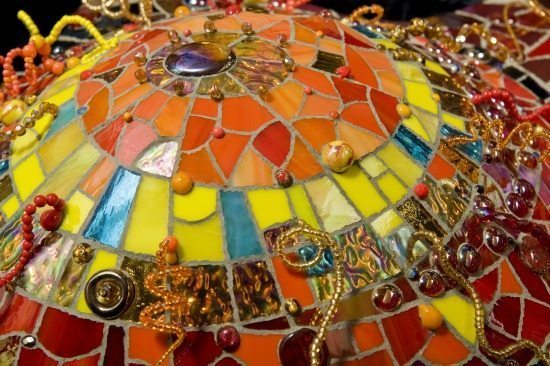 One of the most striking things about Shimizu’s exhibition was the overarching juxtaposition between her work and the more flowing Glass work shown by other artists in the gallery; where flow and transparency is juxtaposed by the sharp, brittle and opaque.  This contrast alludes to a new area of artistic endeavour that emphasises the less-recognised, more unusual, and potentially challenging characteristics of glass: it breaks, its sharp edges refract light. It is, in short, not fluid. 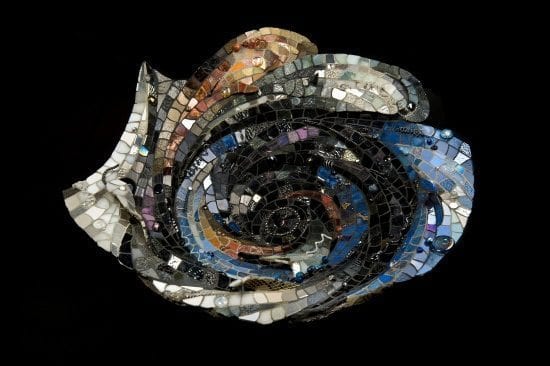 In this light, Shimizu’s pieces appear more starkly original. Glass is broken in her work not to signify the destruction of a work but a beginning.  Pieces are broken as a means through which the artist manifests her vision. In a circular way she assembles these fragments into a flowing expression that still recognises the breakage, by keeping the perspectives distinct through each reflective facet: much like a compound eye. Glass Art, in the main, glosses over these other potentialities and it would be interesting to see more artists truly explore the brittle and broken aspects of glass to artistic effect; an area in which Shimizu is already starting to articulate her vision.