The emotive focus within Semple’s work then is desire and its role in creating anxiety, largely within the intersections of sex, power, or violence. 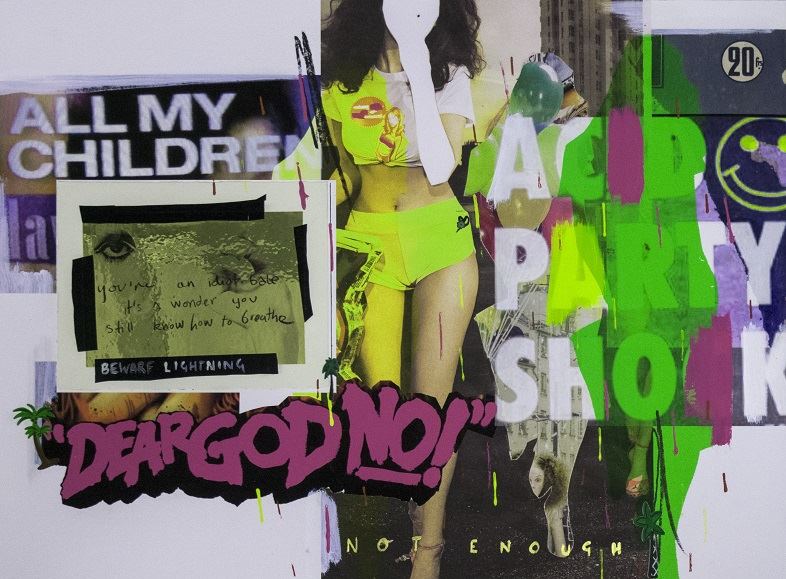 [dropcap style=”font-size:100px; color:#992211;”]T[/dropcap]alking loud and saying nothing, the vocabulary of the Anxiety Generation as described by artist Stuart Semple, uses pop-media to describe real fears via layered abstraction.

What is at stake here is objectification of real people through technicolour violence and sex, within which the subtleties, moderation and progress of most people’s lives become mediocre. Quoting the fictional id Tyler Durden from Fight Club Semple reflects:

Man, I see in Fight Club the strongest and smartest men who’ve ever lived. I see all this potential, and I see it squandered. God damn it, an entire generation pumping gas, waiting tables – slaves with white collars. Advertising has us chasing cars and clothes, working jobs we hate so we can buy shit we don’t need. We’re the middle children of history, man. No purpose or place. We have no Great War. No Great Depression. Our great war is a spiritual war. Our great depression is our lives. We’ve all been raised on television to believe that one day we’d all be millionaires, and movie gods, and rock stars, but we won’t. And we’re slowly learning that fact. And we’re very, very pissed off.

This is the emotional hinterland that underpins the exhibition. The Anxiety Generation simultaneously expresses and hides itself through media messages. Semple’s painting takes lyrics from pop songs or twisted quotations, using the ubiquity of these phrases to describe issues, but at the same time evading  any individual identification. But what are we seeing here: Semple on Semple, or Semple on Society?

By focussing on brands the work deals in the iconoclasm of ‘everyone and no-one’. A thread which links back to his previous painted works in Fake Plastic Love. Again, we see  an artist focussed on symbolic content more than  technique or execution. Signature elements such as his use of die-cast grey remains signalling childhood; the cereal box fonts and titles. The  billboard symbolism of optimism and simplification remain, however, instead of childhood reminiscences (Fake Plastic Love) we are now shown adolescence: energy, anomie, inaction and rebellion. 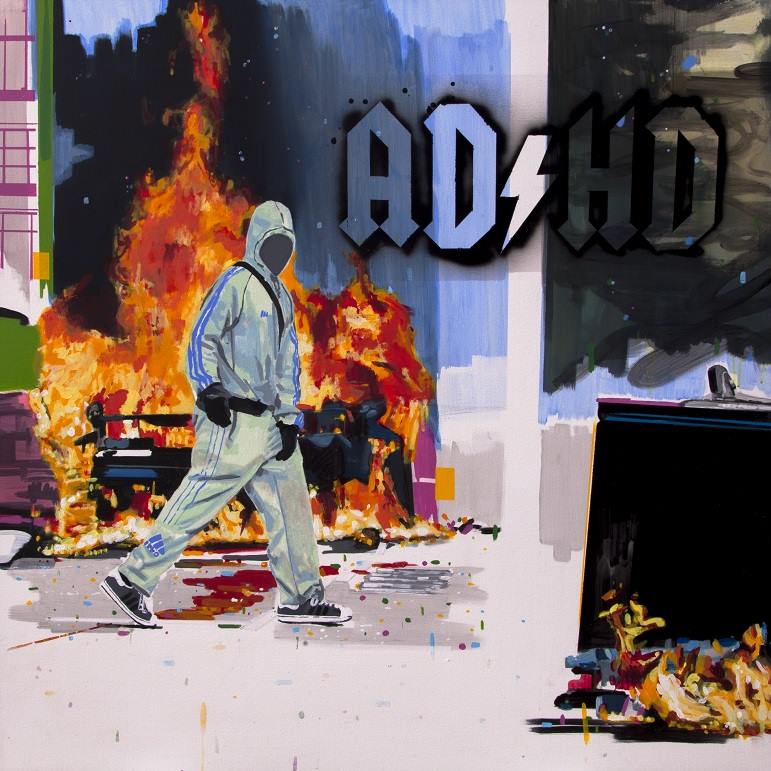 Thematically, the exhibition uses movie pastiches: large brand dioramas dealing with violence; power and sex through pop lyrics; stencilled layers, and stills from an Italian pornographic films. Below this kaleidoscope of fear and desire the core investigation is the same.  Semple is suggesting that reality and fantasy are undifferentiated in how

society sees and acts. The representational world, the virtual world, is as real as it can get for Westerners trying to make sense of a flickering reality that mirrors through generalities and stereotypes.

In ‘Wanna be Startin’ Somethin’’ Semple argues that both ‘us’ and ‘them’ are constructed and controlling definitions regardless of which ‘side’ you place yourself, and by definition others, on. The presentation of news as both fantasy and as entertainment is loved area of investigation for Semple.  A powerful one as it’s where creation and communication meet, making enemies (making friends is too dangerous), and empowering action through morality.

Where previous generations contended with the death of god as a surety, Semple’s work contends with information and self in the same way. Advancing that thought, previously we might have had a solid basis for questioning the unreliable nature of authority. Now that all authority repeats the mantra of ‘we are you’, we must contend with the unreliable narrative of self and so ‘we’ evade the question of accountability, action, or change. ‘We’ the victim, are to blame in a world defined by clientistic brands, noun-adjectives who claim to exist only to manifest our desires. How they do this is by defining desire, and therefore a specific and purchasable outcome for our satisfaction, all wrapped up in a hyper-desirable package of tits, abs, smiles and acceptance. Add stultifying repetition. Alternative strategies for satisfying desires become impractical and practically anti-social. For the Anxiety Generation there aren’t alternative visions, there are only outcomes.

“Cinema is the ultimate pervert art. It doesn’t give you what you desire – it tells you how to desire.” – Slavoj Žižek

While namechecking situationism Semple’s work bears many nods to  Zizek’s cultural illumination, which reveals a similar fascination with colonisation of reality by brand. Zizek argues that the various material and phenomenological assumptions around, say,  the ‘Coke’ experience (cold, fizzy, beautiful, with friends, etc) display the pervasive way in which  we appreciate that the word has been colonised by the brand, making a drink experience contextual to the presentation of the ideal ‘Coke’ experience. Which isn’t to say that there was a ‘purer’ experience before commodity capitalism: each era has its brands, from fish in catacombs and before, but the way commodity fetishism operates is new now that we have a constant flood of media pouring over us as if we had an insatiable thirst – or why Coke’s satisfaction is only temporary.

[T]his readiness to assume the guilt for the threats to our environment is deceptively reassuring: We like to be guilty since, if we are guilty, it all depends on us. We pull the strings of the catastrophe, so we can also save ourselves simply by changing our lives. What is really hard for us (at least in the West) to accept is that we are reduced to the role of a passive observer who sits and watches what our fate will be. To avoid this impotence, we engage in frantic, obsessive activities. We recycle old paper, we buy organic food, we install long-lasting light bulbs—whatever—just so we can be sure that we are doing something. We make our individual contribution like the soccer fan who supports his team in front of a TV screen at home, shouting and jumping from his seat, in the belief that this will somehow influence the game’s outcome. ― Slavoj Žižek

As an exploration of that area between brand experience and reality Anxiety Generation isn’t a sea change from Fake Plastic Love, rather a refinement of meaning creation by blending symbols in such a way that they degrade into feathered fading edges, each symbol bleeding over and into each other.  The final grown form of these creations is more than each individual layer, it is the palimpsest nature of these paintings that contains its core.  Nothing is direct. We are shown events through filters. Like three dimensional images made from successive layers of paper, the edges of each layer reveal only as much as is necessary to convey the image,  each layer creating the margins for the one behind it. Beyond the margins the necessary nothing called depth. Stuart Semple, ‘All the Stars’

When these layered images work, when they resonate, when we they compel, the reliance is on whether the viewer has a connection with the appropriated brands. We all have our favourites, just as we have our own burnt memories of events. Our brands and our brands. A nexus of recollection and inference that we’re supposed to be uncomfortable with, and what we take away. The subjects are social events  real and unreal. Did they happen in the way we think they did? How do we connect with events both locally and globally? Anxiety becomes manifest when we doubt not only what the events were, but who is the victim is and how we are to change things.

The conceit in the name Anxiety Generation is that there is a generation of people to whom anxiety is a constructive mechanism that generates and perpetuates as a productive if enslaving force.  Questioning the mechanism means questioning our, unsatisfied, but satisfiable status. The emotive focus within Semple’s work then is desire and its role in creating anxiety, largely within the intersections of sex, power, or violence. Each piece being a trope of social comment requires us to make a stand, to find value, and to make our choices.

Stuart Semple, ‘You Are Not Enough’

The value of each of Semple’s pieces then is that by rejecting them we should have to be at least conscious of why we’re able to do so. Possibly a better title for the show would have been The Trapdoor. To ambush or escape, we’re off the page at the limit of maps.