To say that they’re referencing Dadaism or Situationism wouldn’t be a cop out, but it wouldn’t tell you anything either, and that is the danger of this record. 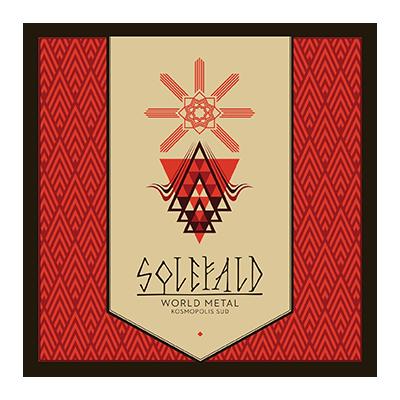 In any given song there are so many different influences at play that the songs often slip away from the listener. This is an album for fans of ADD genre bands like TISM, Captain Beefheart, Zappa or The Residents, but more than anything, Solefad resemble The Tubes, a band whose critique of pop culture used the ubiquitous weapons of the enemy as a suggestion that ‘the person in the mirror isn’t necessarily your friend’.

What you see is what YOU see, where being able to laugh at yourself is very healthy. World metal. Kosmopolis Sud (twinned with the 2014 Kosmopolis Nord) is Solefald’s ninth studio album since 1995 and feels like the band’s most accessible effort to date (although long time fans will have lots of fuel for favourites and passionate disagreements).

The opening track ‘World Music with Black Edges’ contains elements of power metal, folk music, euro techno, and disco reminiscent of Mr Bungle/ Faith No More Alumni Trey Spruance’s Secret Chiefs 3 within a stronger comic presence. There is so much dynamic range within the vocals and musical shifts here that this album earns its place next to a Tim Rice score about cocaine and cow tipping.

Where do you start with this record? Where do you end? Endlessly creative, the minds of PhD Student Cornelius Jakhelin and retired blacksmith Lars Nedland, seem restless in that darkly humorous way Scandinavians have of making light of worldly concerns. Namely by being a bit silly and casually threatening. Whether or not inside the babble grooves and syncopated madness of ‘World Metal. Kosmopolis Sud’ there are serious concerns isn’t easily knowable.

To say that they’re referencing Dadaism or Situationism wouldn’t be a cop out, but it wouldn’t tell you anything either, and that is the danger of this record. Sure it’s clever, but there is a suspicion there is fuck all beneath its surface noise. Of course this shouldn’t deter the musical traveller. After all, an album of worldly souvenirs and curiosities like this is time well spent.

Perhaps the most raucous highlight on the album is ‘Bububu Bad Beuys’. With its tribal dance metal foundation and pounding polyrhythmic vocals, the track is an immense delight, taking the best parts of Rammstein and injecting some Battles-esque flourishes to head pounding effect. Rumours that this song started as a double time version of Manu Chao’s ‘Bongo Bong’ are most likely unfounded despite many many formal similarities (including the song title and lyric structure).

With its riff-a-minute forward surge, bands like Solefald give contemporary heavy listeners (with our easy access to all of time’s recorded music via Spotify) that rare rush of speed and discovery from a time when denim-clad wizards cleared a virgin path to heavier and faster lands. Weird, worthwhile and highly recommended.

Previous Story:
Now You Don’t See It, Now You Do! Reactions to Restored Sight

Next Story:
Every myth is a memory, formed through complex layers of tellings through time.