Siena in all its least-known corners (Federico Pacini)

Pacini photographs the off-season, with its overcast skies and grey suburban areas. 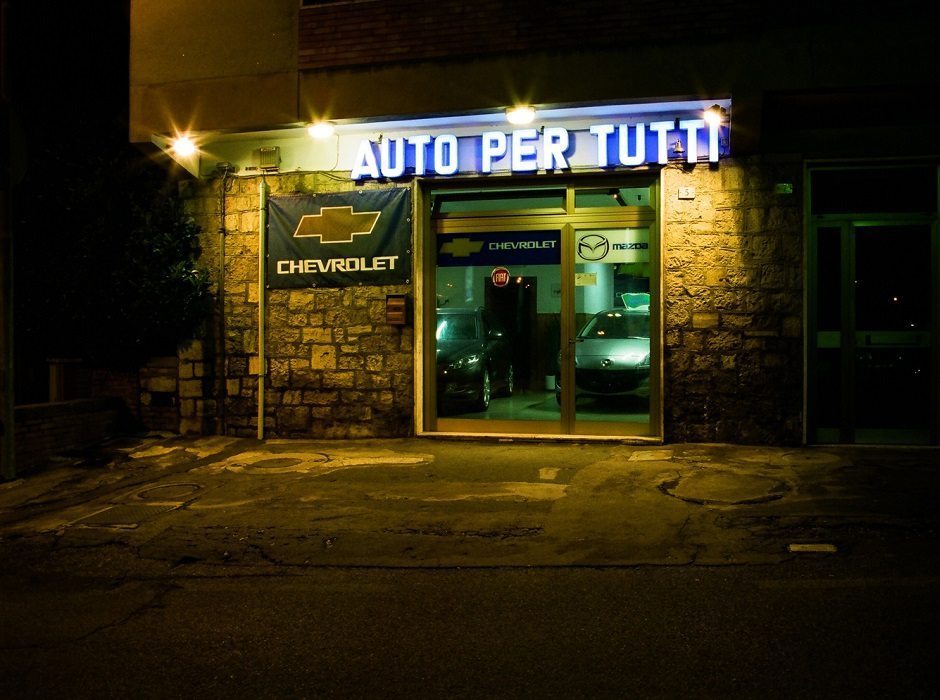 [dropcap style=”font-size:100px; color:#992211;”]T[/dropcap]he photographs in Federico Pacini‘s 2013 photobook entitled Purtroppo Ti Amo were all taken in the Italian town of Siena, where the author comes from and lives.

Do not expect a sunny and picturesque postcard image of this beautiful town. Pacini photographs the off-season, with its overcast skies and grey suburban areas.

With one single image per page, their carefully chosen order within the book creates rhythm and contrast and unfolds the story of the author’s multi-faceted intentions. Taken on a journey through images of empty spaces, accumulation of objects, portraits, close-ups of geometric details and large descriptive views, the viewer immediately notes some recurring themes, such as an attention to typography – a few words detach themselves: Moderno, Braccio, Fashion Italia, Miley Cyrus, Sala Slot Machine, Duomo, Auto Per Tutti, Elettricita, Siena Parcheggi, Hotel….

Another regular fixture is the all-pervasive Catholic religion, represented by a few familiar visual tokens, indicating the way in which religion still orchestrates life in small-town Italy.

Pacini’s photographic style is often inspired by the 20th century documentary tradition epitomised by someone like Walker Evans: focused, with frontal and often symmetrical composition. Pacini, however, has chosen colour photography to fit his purpose, bringing us closer to the contemporary universal use of colour images in the news, on TV and in magazines. 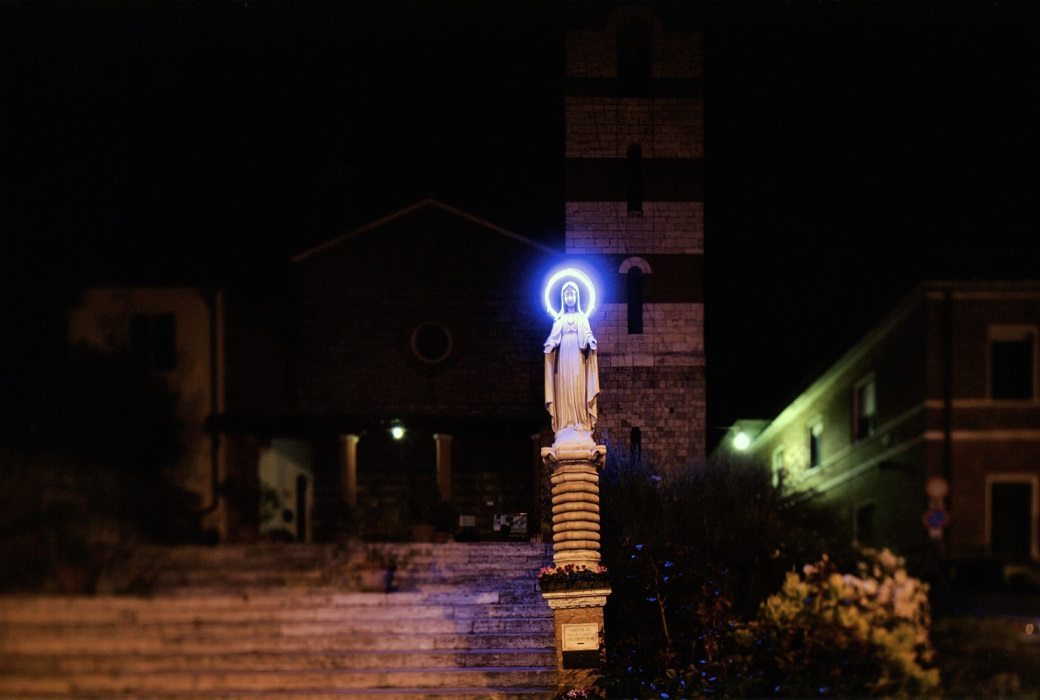 Secondly, a major difference between a mid-20th century photographer’s images and these lies in the notoriously hard to grasp “tone” of discourse, which scholar Elio Grazioli also alludes to in his opening text. Where Evans was revealing the modernity of his time, here Pacini adds layers of distance and irony, showing the outdated quality of the displays and advertising strategies he pictures.

The method of juxtaposition of the different elements that constitute this city creates criticality. For instance, the photographer shows us remnants of old advertising in which Anglo-Saxon culture has overlapped local tradition. Old posters, bus stops, pornographic material and billboards appear run down and discoloured. But even in this state of decay, they still occupy the urban visual frame. Their juxtaposition with religious symbols belonging to an old-fashioned type of religious faith (images of the Virgin Mary, gold-laden Eastern icons, Antiquity-inspired statuary, etc.) underlines a generational clash and the inadequacy of traditional religion.

Midway through the book, images of a volunteer group and their meeting room begin to appear, hinting at what seems to be Pacini’s actual concern in this project: the observation of the workings of society. Knowing that he has a background in Political Sciences leads us to think that this may be his angle of approach to both the photographic endeavour and his native city.

One realises upon close study that Purtroppo Ti Amo is not only a collection of meta-pictures of Siena where one can simply spot images of the city within images of the city, nor is it only a full circle whereby the whole project is a commentary about photography itself. To me, the book is first and foremost  about the different spaces of social interaction, about these public spaces where people may gather and communities interact: the city itself, with all its parking lots and roadworks, the hospital or old people’s care home, the waiting room, the shop, the park, the bus stop, the fun fair and of course the church.

Pacini reveals the common aesthetics of these spaces: Formica tables, ceramic tiles, air conditioning units, signage, metallic furniture, concrete, neon lighting. It is not a coincidence that he is also attentive to surveillance cameras and the state of abandonment in which a lot of these places find themselves.

It is difficult not to believe that the impetus for bringing this series together is a desire to unveil and maybe denounce the shortcomings of the authorities. Any such focus on public spaces and thus on the way people live together, meet and  interact within their daily environment is political, and one cannot deny this.

Far from being an open lobbying effort though, it manages to remain a subtle statement, offering an observation and reflection on the state of decision-making bodies within our society. Consciously or not, Federico Pacini has embarked with this book in a process of showing the way authorities control or, conversely, are removed from public areas, the way policy allows or prevent these 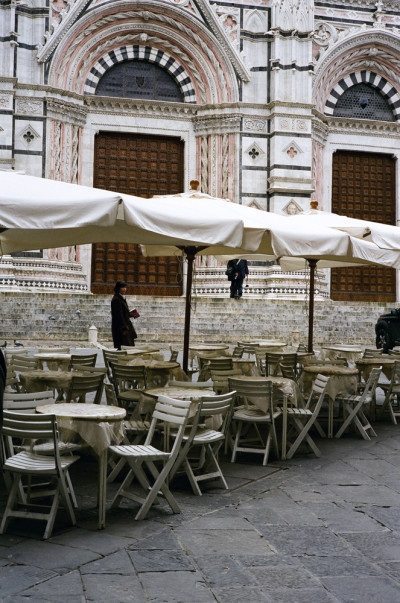 spaces to thrive and finally the way other entities, such as the Church, private businesses or volunteer groups, exercise their influence on people.

Further to this, the generational clash observed earlier can also be noticed in what is not there in the 0photographs. Youth, energy, renovation are missing, offering a rather pessimistic portrait of the city and of the state of democracy, not only in Siena, but more generally.

It is only towards the very end that the reader is guided to reflect upon the meta-linguistic character of the project, coming back to what Elio Grazioli mentions in his text. With what seems to be the portrait of a photographer, along with a framed press clipping boasting il fotografo dei VIP (the VIP photographer), the word photography appears in the image, reminding us of the medium through  which we are conducting our political reflection. The inescapable subjectivity of  any social commentator having thus been duly acknowledged, the whole book is cleverly put into perspective.

Also towards the end of the book, the words mostra fotografica (photography exhibition) draw our attention to the concept of exhibition. An exhibition can be thought of as an interface between a creator and a viewer; someone who expresses themselves and a public. Exhibiting, or hanging something on a wall is showing, spreading, advertising. It is a way of communication of ideas used not only in art but universally (in publicity, religion, etc.) to convey ideas, rules or orders. The concept of exhibition and a variety of exhibits is exactly what Pacini shows and he is himself now presenting his work, ironically not hung on  walls but in the form of a book.

Upon closing the back cover, one can finally come back to the title phrase,  Purtroppo Ti Amo: (fortunately I love you). It is personal, intimate and, in short, quite in contradiction with the interpretation we just proposed of the content. This emotional title reminds us of the genuinely humanistic nature of the project. The love that is hinted at could be for Siena, for Italy, and for (and  between) individuals who live within these political and administrative borders.

Federico Pacini managed to produce a work of love, made over several years, by deeply observing and exposing his true knowledge of Siena in all its most little-known corners. He draws attention to common spaces that deserve to be reclaimed and proves himself a citizen who seems to care about how we might live together.

Next Story:
Opting out of the attention economy.