Between the suburbs and the city, and all that they stand for in Laudati’s oeuvre, there is the ever-present fear not of age itself, but of fading away rather than burning out 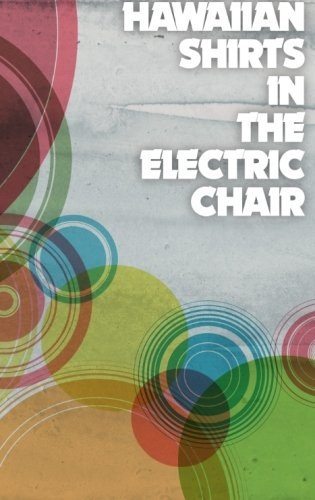 Questing for love and purpose, the verse collected in Scott Laudati‘s Hawaiian Shorts in the Electric Chair bespeaks a fear of the void as profound as it is unnamed, an absence alluded to from a range of angles lest direct reference bring it, like the Sandman, into open manifestation.

Warm beer, Cold women,
Man I just don’t fit in,
Every joint I’ve stumbled into tonight,
That’s just how it’s been.
All the double-knit strangers,
Gin and vermouth,
Recycled stories,
And the naugahyde booths.

There is neither warm beer nor cold women in Laudati’s New York tableaux, such are simple ills a scale or two down from the brittle succour of prescription and street pharmacuticals brought into brutal collision with voracious lovers whose clinical detachment places them firmly on the autism spectrum. The bars of Waits’ disappointed lothario seem cosy in comparison to the city-dweller’s loneliness amidst the hum of unengaged humanity surrounding him. Suburbanites have it no easier though, this is a generational ennui. The Onion may parody the aspirational malaise of the metropolis-bound millennial with jocular lampoons of ‘Unambitious Loser With Happy, Fulfilling Life Still Lives In Hometown’, but Laudati’s version of the suburban stayhomer dies of a heroin overdose:

– ‘Give A Lozenge To The Voice Of The Archangel’

Our protagonist’s reaction? To take too many drugs and see if he survives.

Where are the smartphones, the Snapchat, Facebook, Tinder and Instagram-enabled empty calories community that never sleeps, that never leaves the urbanite alone with the uncomfortable emptiness, that hivemind which always has a playful kitten or monkey knife-fight to distract and digress? Mentioned rarely, in passing (‘when the last/ revolution wasn’t televised/ but free wi-fied’ – ‘Lorraine’), and scathing mention at that, the existential succour of online interaction is as meagre as should be expected of airborne zeroes and ones calibrated and pixellated. ‘You’ll get published’, said Nick Tosches of Laudati, ‘You’ve got the face’, which may well be true, but it’s unlikely he’ll be fronting shinyhappy PR campaigns for Friendster any time soon.

Mundanity, suburbanity, anonymity: Laudati’s world in Hawaiian Shirts in the Electric Chair is menaced by their centripetal force, peopled by near-identical twenty-somethings in desperate search for anything which endures, be it narcotic burnout or artistic creation:

Milling, panicked, Laudati’s characters grasp for ‘experience’, casual sex or Manhattan authenticity, the unwritten implication being that it is in the very suburban community mundanity that most of them will find their craved intensity of experience realized. Domesticity is, if nothing else, authentic. Unlike ‘the american experience’ of the Slovakian girl brought to see St. Mark’s Hotel:

later,
we said
goodnight
and I moved down
7th avenue.
I looked up and saw the hotel chelsea.
EVERYTHING I told that curious
slovakian had been a lie.
bob, bukowski, dog diced nancy
they’d all lived here
not st. marks.
and then
I smiled
because
she’d
never know the
difference and
I
got to kiss her
anyway.

Hawaiian Shirts in the Electric Chair reads with the ensemble momentum of a concept album, building nuance and depth via cross-reference and consistency of tone rather than through complexity at line level. Given that the poems are presented (all but one) vertically, with the majority of lines clocking in at less than five words, it would be churlish to approach the collection with the schoolboy’s poetry-apprciation toolkit of metre, rhythm, rhyme, assonance, alliteration, allusion etc.

These are not exercises of technical dexterity in the Manley-Hopkins tradition, but washes of imagery building to a vibrant (if icy) expression of Manhattan yearning. So many people, so many drugs, so many lovers, so little contact. It is telling that the cummings-esque lowercasing of the typescript applies to almost everything except the pronoun ‘I’ – our protagonist may echo Plath on many levels, but the sublimation of self has still (thankfully, there is some hope remaining) some way to go before reaching abject nihilism.

Tortured young men coming to grips with adulthood litter the canon of human expression, from Holden Caulfield to Hamlet to Gilgamesh. Embedding that universal into the particular of post-9/11 Manhattan is Laudati’s talent. Wry and self-effacing at times, the collection is not without its moments of wit. Perhaps acknowledging the ineluctable comfort of aggrandising future memories, the interchange between a midlife braggadocio and our earnest narrator is a masterclass in inversion – the jaundiced wisdom of years given to the younger character.

When the now-docile career-man recounts a trip to Paris spent not sightseeing, but in flagrante with three flight attendants, the response is typically considered:

I think you
made the right
decision.
Paris has been Paris
for 700 years.
And it’ll
probably stay
that way until
the end.
But you saw
Gail
Lily
and Katie.
Maybe 100 other
men could say
that.
And I’m sure
none of them
will age
as well
as
Paris.

– ‘The Things Men Say On Their Way To Work’

It’s a grudging nod to the possibility that there may be solace in the settling of middle age, but nor is it appealing. (Lord grant me chastity, but not yet.) Later in the poem the ageing driver comes in for an imagined haranguing:

Gail
Lily
and Katie,
for no damn
reason at all.
And you
traded it
all in

(recall Stephen Dedalus’: ‘Damn the Dean of Studies and his tundish! What did he come here for…?’ in A Portrait of the Artist as a Young Man).

Between the suburbs and the city, and all that they stand for in Laudati’s oeuvre, there is the ever-present fear not of age itself, but of fading away rather than burning out (that the collection features a poem entitled ‘Mick and Keith Pt 1’ suggests the reference). That fear informs the collection, is indeed its central theme, whether embodied by its gut-spreading midlifers or the beautiful youth of the depicted urbanites. Escaping mundanity is a mindset, the subtext whispers, and may just as easily achieved (or not) in those maligned suburbs as in the sensation-packed skyscrapers of NYC.

But not any time soon. Lamenting the death of his cousin ‘little’, Laudati’s narrator ends the collection with a grudging acknowledgement that if there is a dichotomy of options available to his peers, neither looks particularly promising:

i should’ve told
“little” about what
the suburbs and boredom
could do.
but he was a smart kid,
we shared the same blood.
i should’ve told him
about the fear
and what
it
can do

– ‘Give A Lozenge To The Voice Of The Archangel’

Hawaiian Shirts in the Electric Chair is available, and recommended, from Amazon (hardcopy) or Smashwords (e-book).

Next Story:
Office Jerks and their Uses