I asked him how he had gotten his first book published. “It’s a dead industry”, he said.

[dropcap style=”font-size:100px; color:#992211;”]T[/dropcap]he morning does not find writers well. I know this now, because last night I stayed out drinking with Nick Tosches. And while I’d like to say we went down swinging, I’m pretty sure we just went down.

I took a Russian girl to Circa Tabac after work. A bar I’d only heard of because Esquire had interviewed Tosches there about a year ago for his new book. The Russian smoked cigarettes, and like all Russian women I’ve tried to date, I knew I wouldn’t be able to make her laugh. I had a credit card so I was pretty sure I could pay for her drinks. And even if that failed, she could smoke inside Circa Tabac. At least she wouldn’t be bored.

I’d come to Circa Tabac a few times since the Esquire article. My manuscript was finished and I wanted a real writer to look at it. This time, with the Russian, Nick was there.  I nodded to the Russian.

The Russian had almost been a rockstar when she was too young. She didn’t understand the hustle.

It was a gamble, though. I could see a war in every line of his face. There was no way to know if he’d shake my hand or hit me with a bottle.

We Wikipedia-ed Nick Tosches on her iPhone. He and I share a birthday. “See”, I said, “we’re both Libra’s. I can’t lose.”

I lit a cigarette and said, “I’ll be right back.”

Nick started watching me immediately. I put my hand to my head and did sort of a salute. We shook hands. 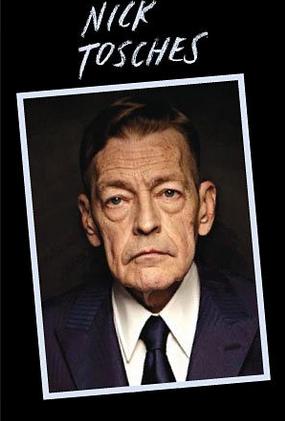 He pushed his eyebrows tight to his eyes.

He told me to sit down. He looked at my girl.

I decided then that I would listen to every piece of advice Nick Tosches delivered. I asked him how he had gotten his first book published. “It’s a dead industry”, he said. “Nowadays even if you get published it’s no guarantee anybody will read your book.”

He told me that after he’d finished his first book- Hellfire, he just worked his way through the Writer’s Market book. “Anybody could get published back then”, he said.

I realized this may be the only opportunity I would ever have. I didn’t even look back at the Russian. I just ordered the Maker’s Mark (cheapest drink on the menu) and another of what Nick was drinking. I couldn’t read the bottle that was opened for Nick, but it looked like Port wine.

Eventually the Russian realized I wasn’t coming back. She walked past us and said, “Hi Nick”. She ignored me.

There was one waitress working the place, a flapper with a flower in her ear. She came over and sort of leaned into Nick’s lap. Nick dragged on his cigar. He winked at me and said to the girl, “Someday, we’ll run away together and get married.”

I didn’t ask any questions. I just let Nick go. He told stories about Lester Bangs. About his apartment burning down and Lester using a pay phone on the street as a home office. “I can’t believe that guy has gotten so famous”, he kept saying. Occasionally I’d try and gear the conversation back to getting published. Nick kept saying, “before we leave I’ll give you some agents”.

I probably finished the bottle of Marker’s Mark. Nick had at least four more glasses. Everything was going too perfect. Some yokel on business from Columbus, Ohio sat down next to us. The guy looked like he’d won this trip to New York off of a game show. Ohio State hoodie. Jesus sandals.

The guy leaned over Nick’s shoulder.

“I’ve heard of Lester Bangs”, he said. “He was in Almost Famous.”

The whole mood had now turned. Nick had no time for small talk from Ohio. I knew five hours of drinking would be getting us close to the red line. I needed to get out of there with the agents list before this Ohio guy said another word. Another ten minutes and Nick’s memory would start lumping us together.

There was no way Nick Tosches was going to e-mail me. I stared defeat right in the eye. I took a napkin and tried writing my e-mail down. But I was too drunk to keep the pen from shaking. I couldn’t get the u in my last name to stop looking like a v.

I handed Nick the napkin and he put it into his jacket pocket. I asked him about my manuscript. “I’m not going to read your manuscript”, he said. “You’ve got the face though. You’ll get published.”

That wasn’t true, of course. But I figured it best to bow out. He pushed the doors open like James Dean, with nowhere to be and no one to hurry home to. And just like that the last of the greats stepped out onto Watts St. Disappearing between the gray buildings and endless car horn symphony of the New York night.

Next Story:
Sobering Thoughts and the 100 Yard Stare