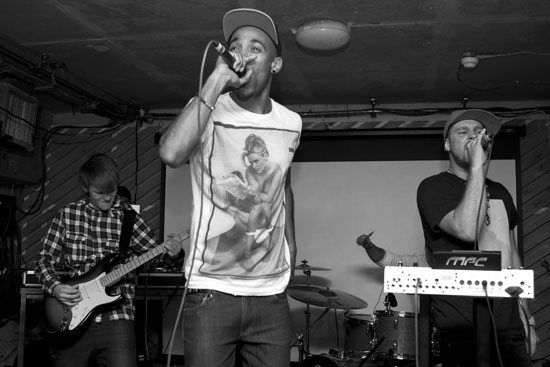 The constant hybridisation of music is the fuel that drives innovation.

The problem is that decontextualising sounds and themes from other genres can make them meaningless or seem weakly pastiche, rather than bolstering Rock’s perennial skeleton with adamantium. Plastic claws don’t cut it. Rock music has an energy, an undeniable life-force that can never truly be extinguished. Not least because music industry oldies and the record buying public love that holy formula of guitars, bass and drums. This means that everyone is constantly trying to conjure immediacy from the same primeval tools that have been used to soundtrack middle-teen-age sexual ambition and social recognition.

They seem like nice people who would prefer a cup of decaffeinated tea over barely conscious ketamine sex in the back of a stolen car, so how they connect with Dubstep is an unanswered question

On some level anyone getting on a stage is seeking attention. Whether deserved or not. Whether interesting or not. Whether original or not, it’s a numbers game. So long as there are more people below the stage than on it you’re an elevated priest-king of desire. Much more than the intellectualisation of sound becoming melody and melody into meaning, Rock as a cultural event is about transforming the destructive tendencies of irresponsible man-boys into creation. 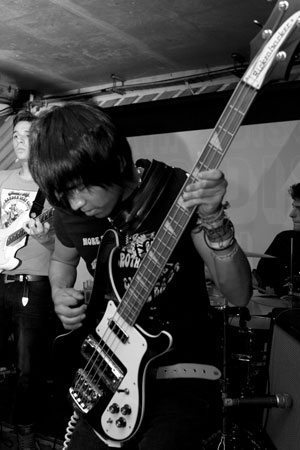 This is a good thing.

It could be argued that originality is important. But so far as the majority of Rock and it’s listeners are concerned, this isn’t true. The most important thing is a feeling that this moment will only happen once, or that the zeitgeist of music only requires that it seems immediate to the listener. This doesn’t necessarily mean ‘new’, how many people have discovered musical nirvana in a dusty record put to wax generations ago? That said it’s much easier to sound new or immediate to an audience if they don’t know who you are or what you sound like. Of course this isn’t going to help if they don’t like your type of music.

People usually like bands that capture something of a band they already like and present it slightly differently or, more relevantly, take the basic rock formula and add elements of popular trends. Enter: The Savage Nomads, Don’t Wait Animate, and White Powder Gold. 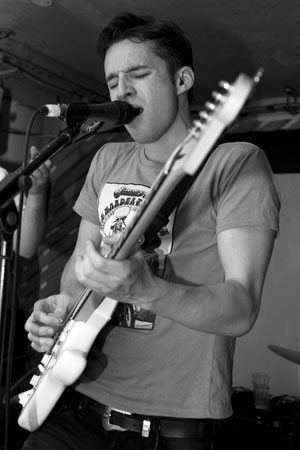 Each of the three bands on the bill are trying to reenergise the basic format by adding elements of dance music to their sound. However where Don’t Wait Animate and White Powder Gold are choosing to reference modern dance trends, The Savage Nomads are reworking Afrobeat (and who isn’t at the moment, see The Postwar Years, TuNe-YaRds) with a bit of Adam and the Ants.

To poorly paraphrase Brian Eno during a documentary on Scott Walker;

It seems like everyone wants to be Roxy Music or the Talking Heads, we haven’t moved on, it’s depressing

Of course, he’s referencing bands that he was directly involved with, which is a bit myopic of him, but he has a point. Not as much as Jim Jarmusch:

Select only things to steal from that speak directly to your soul. If you do this, your work (and theft) will be authentic. Authenticity is invaluable; originality is non-existent. And don’t bother concealing your thievery – celebrate it if you feel like it. 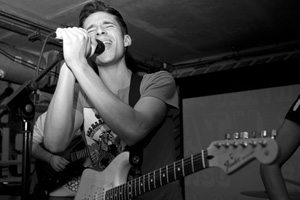 So according to Jim and Brian, nice guys, godfathers to us all, oldies of the Way, it comes down to inspiration mixed with self-aggrandisement and most importantly tempered with enough even-handed realness to be honest about your theft.

White Powder Gold are essentially a grime based duo who harness a sort of punkish energy through live guitars and drums, with a bit of laptop wizardry thrown in. Their songs are urban anthems of desperate energy and late-licence violence, sexualised through an in-the-crowd’s-face type of performance. On record, this comes across with a brutal polish that sparks interest. However on the night, it’s seemed disjointed and unmoving. The anthemic thrust their tracks seek seemed ponderous and a touch forced. Everyone has bad nights, this was perhaps theirs. 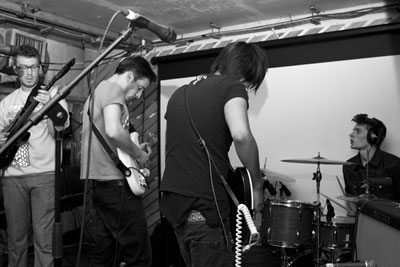 Taking elements of dubstep and grime into a live scenario requires a lot of rehearsal and a good sense of cohesion between all the elements. At the moment they’ve got elements that they love: rock energy; dubstep basslines; interesting drum fills, but without making it their own they seem like a bunch of guys making the most of posturing while shouting genre-based cues. White Powder Gold may yet reach the equilibrium of parts needed to make their set convincing, but unless they make their choruses truly lyrically roof raising rather than just loud it’s going to be a hard battle. To their credit they have the rough charisma and sheer force to make it happen but for what they intend it needs to be a lot cleverer both musically and lyrically.

Don’t Wait Animate are a London-Coventry five piece group who have received a number of accolades from a variety of press. Their melange of indie and dubstep is pretty, and well rehearsed they managed to move effortlessly through their set on the night. It’s good music from a very talented bunch of people and well worth following but their act came across a bit tame.

The problem is that DWA are not visceral enough to stand above acts like White Powder Gold who, for their faults (which are really about them being a very new band), have the energy to carry a set to the people. Don't Wait Animate seem like nice people who would prefer a cup of decaffeinated tea over barely conscious ketamine sex in the back of a stolen car, so how they connect with Dubstep is an unanswered question. By contrast White Powder Gold seem like they would live for these moments, considering them aptly a ‘no brainer’. 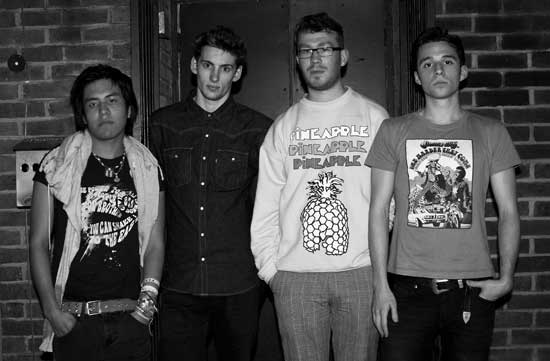 The night went to The Savage Nomads, already groomed for the big stages and press coverage, they have the judiciously dead-behind-the-eyes polish of seasoned professionals. Their debut record abounds with creative flourishes and celebrity endorsements (Mick Jones of The Clash says “I can’t think of anyone better to rock the whole world”) and musically they have the undeniable talent to continue past the difficult second record to make some truly astounding music. Still in their teens they managed to channel Adam Ant’s voice and emotional abstractions with a restrained virtuosity that would be remarkable if it were more emotionally engaging. The lead guitarist plays exceptionally well, inventive without being dominating he is a show stealing proposition for anyone who’s considered buying Guitar Player magazine. Their hit-in-the-making The Magic Eye had the crowd of industry pros and conscripts nodding along and mentally marking cheque books. It is simply a great song that works on many levels and if there were less people scribbling (like me) in the crowd would have undoubtedly rocked the house. 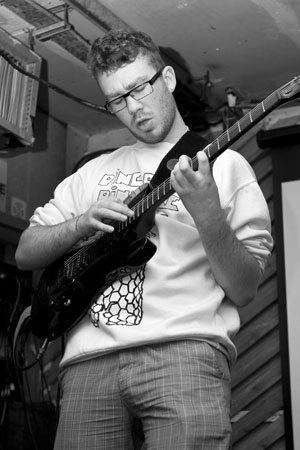 The success of The Savage Nomads is already too much of a fait accompli to make me feel excited. I feel good for them but on stage they were a million cover shoots away. Perhaps they picked up on the industry vibe of the evening and so couldn’t get over with so many lidded eyes on them. It’s hard to say but if only they’d let loose and become dangerous on stage then they’ll truly be a great band to say you’ve seen, but not this night.

None of the bands on the evening came across infectiously and each faltered within their own limitations. All of the press releases mention Dubstep but only White Powder Gold bring it over with any of the authenticity or danger the name suggests. The Savage Nomads are undoubtedly the band with the most polish, but having been championed by Mick Jones since they were 16, and having supported Big Audio Dynamite recently it’s hard not to think they’ve already come round to idea of music as a career.

Sadly musical careerists have to dig a bit deeper to find emotional depth than bands that graft their way through bad decisions, tough gigs, obscurity and internal malice. The greatest setback a band like The Savage Nomads can face is their early success. Without struggle their gigs will seem like a given and they’ll go through the motions like they did at the Notting Hill Arts Club. Unless a band celebrates the fact it’s onstage, celebrates its stolen influences, celebrates its stupidity, it’ll never connect with an audience. The Savage Nomads didn’t perhaps because they know they don’t need to, Don’t Wait Animate didn’t because it’s admittedly a bit passé but White Powder Gold did and gave it their all because they might be dead tomorrow. Who do you want to see succeed?

Of course, this is my perception from watching a single mid-week performance at a devoutly industry gig. All these bands are young, talented and definitely on the way somewhere big. I would have loved them to stick it to the man, made snotty comments from Rock’s subterranean pulpit, and tore the industry a new one. Perhaps they will, but I’m sure they’ve been advised to do it privately.