it’s fun, it’s heavy, and the over the top Satanic lyrics are often hilarious. By no means should Satan’s Wrath hang up their goat-skull helmets and battleaxes any time soon. It’d just be nice if those impressive flashes of an underlying, genuinely talented metal outfit with something more original to say, were given a little more breathing room.

Promo releases for albums often come with a brief blurb by the label that describes the overall sound of the band and a little bit of info about the band itself, so reviewers don’t need to do anything as crass and tiring as, say, typing the name of the band into Google or checking the Wikipedia page.

The promo blurb for Galloping Blasphemy reads, ‘this abominable band delivers satanic necrometal drenched in sacrificial blood’, and then offers a few lines about unholy sacraments, vomiting priests, and the forces of the archfiend. It’s all very tongue in cheek, and does an admirable job of saying everything you need to know about the band, despite saying absolutely nothing about them at all.

So if you’re wondering what something like ‘Satanic necrometal’ consists of, it’s actually a surprisingly enjoyable mix of 80’s Bay Area thrash, Maiden-influenced harmonies, and savagely screamed lyrics about how awesome Satan is.

The songs are often inventively structured, although sometimes come across as thrown together at random. Still, it’s nice to see a band attempting to do more with metal than hitting the verse/chorus/verse formula. A bleak, building intro may erupt into a breakneck thrash riff, slide into a Priest-worshipping harmony, then shred through an intense guitar solo before dropping to a groove-based faux-doom riff.

At its best, it’s wonderfully controlled chaos; at its worst it makes it extremely difficult to differentiate songs, as riff after harmony after riff races by never to be heard again. Drums are serviceable enough, though nothing Lars Ulrich hasn’t done before, whilst the reverb-drenched mid-range screams complement the music, but like the songs themselves are rarely presented with any kind of structure or hook.

Sadly, the most obvious flaw is the mild sense of monotony that starts to kick in about halfway through the record, as you start to feel that Satan’s Wrath have pretty much shown off everything in their (admittedly thoroughly enjoyable) bag of tricks by this point. They also occasionally come a little too close to aping their influences, with ‘Death Possessed’ being a Slayer song in all but name. The instrumental title track is a fun piece, but is nowhere near different enough from the rest of the material to warrant being an instrumental. It almost feels like a half-finished leftover the band couldn’t think of a way to end, which is a shame given that is does feature some typically great riffing. 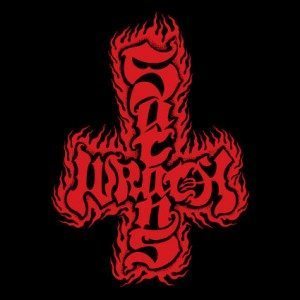 The only reason moments like this bring the overall experience down so much is that a lot of what’s on offer here is truly excellent old-school metal. When the band get creative, such as the clean guitar in ‘Slaves of the Inverted Cross’, it proves a much needed contrast to the constant buzz-saw guitars, even hinting that the band are holding back on adding more interesting elements to their sound.

There’s further evidence of this in closer ‘Satan’s Wrath’, probably the strongest track on here despite not changing the sound much, as it has a much more prevalent feeling of progression and songwriting dynamics than the preceding material.

Being tongue in cheek can be endearing, but it doesn’t make up for musical mis-steps. This is breakneck thrash without the superlative chant along ‘Curse of the Legions of Death’ or ‘Master of Puppets’ moments. It’s the excellent guitar harmonies that characterise a lot of the melodeath scene, but without the underlying song structures to complement them. It’s the Satantic black metal gimmickry without the atmosphere and dynamics.

This is not a bad record by any stretch of the imagination; it’s fun, it’s heavy, and the over the top Satanic lyrics are often hilarious. By no means should Satan’s Wrath hang up their goat-skull helmets and battleaxes any time soon. It’d just be nice if those impressive flashes of an underlying, genuinely talented metal outfit with something more original to say, were given a little more breathing room.

Next Story:
Inside Out: Anton Corbijn on film