The cookie crumbles beneath the foot of the dancer (Sam Pink)

‘I didn’t write in high school. I barely talk about writing to most people in real life because no one cares and I kind of agree, I like not talking about it. ‘ Scott Laudati interviews author Sam Pink

They call it the “Great American Novel” and it seemed important to complete something like that. I was dating a girl who told me that was stupid. She put a book in my hand called Person and said, “who cares about Moby Dick? Read this. This is now.” 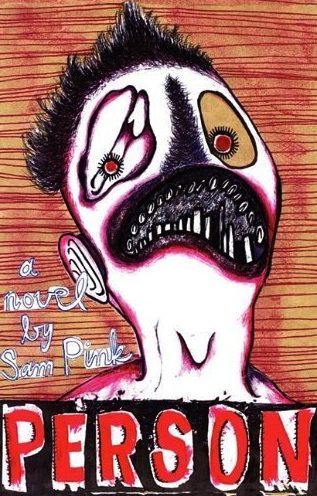 I was apprehensive. The book was written by Sam Pink, someone I’d never heard of. The cover of Person is a hand drawing of a disgusting head, presumably drawn by the book’s author. I left that night and took the book. I finished it before dawn.

Sam Pink is either quitting writing, or building a comeback, or preparing to commit suicide. Either way, his writing is fast, it’s filthy, and it’s always hilarious. Information on him is scarce but his writing has found a cult following. Person is his latest novel.

Scott Laudati: Some people think that you are not a real person. Another blogger said she thought Sam Pink was pseudonym. Are you a famous writer trying to connect with a cooler audience?

Sam Pink: I’m a real person, come visit me in Chicago, have good time, you can touch my face/cut my face with a glass bottle.

Scott Laudati: You’ve got six published pieces on Amazon.com. All with rave reviews. The writing is like a look back on a filthy weekend. I’m pretty sure you’ve invented a style, or there’ll be a genre someday of whatever you’re doing. Do you have a name for it?

Sam Pink: I don’t think there’s anything unique about the style.  The style is just to make sure I say something exactly as it was thought/experienced.  Sometimes I feel insane trying to understand if I’m saying something the same way I’m thinking it.

The style is just to be as clear as possible.  I don’t feel like it’s a style I want to spread or anything. I don’t really have any preferences about how people do what they want to do.  But yeah, it’s called “schiz emo realism.”  It’s how the cookie crumbles.

Scott Laudati: Did you write in high school? What were the reactions of the first people you showed your writing to?

Sam Pink: I didn’t write in high school.  I barely talk about writing to most people in real life because no one cares and I kind of agree, I like not talking about it.  But I do enjoy talking about things with other writers sometimes when we meet up. Crumbling some cookies then.

Scott Laudati: What is your writing routine? Do you have a particular room? Drug? Brand of cigarettes?

Sam Pink: I don’t have a routine.  I’ll have a routine for each new thing, but never one routine for everything.  I like rooms facing alleys but I like cheap rooms better and I like whatever room I have the best.  I’ll take whatever drugs because my head hurts sometimes and wouldn’t you know, I’m just terrible shit all over.

I don’t drink that much alcohol.  I don’t smoke cigarettes but I like to smoke maybe half a Newport once in a while.  But that’s just how the cookie crumbles.

Scott Laudati: There’s a big gap in information between writing a book and getting it published. The internet has lists of agents/publishers to e-mail but word is everything ends up in a “slush pile”. How did you get your first book from your computer to a publisher?

Sam Pink: I’m really stupid and ineffective at things like that.  Most of my writing has been published after someone asked for it.  I really feel bad when people come to me asking about how to publish stuff because I never thought about it, I just wrote shit that entertained me and then other people started publishing it .  That’s how things happened with Lazy Fascist and I like working with them.  They’re pretty much like, ok with whatever.

I just emailed the editor to ask if I could use a picture of my ass as my next author photo and he said yeah and then he asked me if I shaved my ass and called me “white meat.”   I’m bad at interacting with people.  I’m just lucky.  Like, if the publisher/magazine/whatever doesn’t already like me, I feel like I’m bad at interacting with him or her.  People tell me I don’t do well with social cues.  I don’t know the dance.  The cookie crumbles beneath the foot of the dancer.  The cookie is crumbling.

Scott Laudati: I can’t imagine a query letter that could explain your writing. What were the initial responses to it? How long did it take to get published?

Sam Pink: Before I answer this I want to say that whenever I read your last name, I think, “lao-dottie, we likes ta party, we don’t fuck around and we don’t hurt no body.”

Scott Laudati: When you were first published what did you do? Did you go to work and give your boss the finger?

Sam Pink: No, it was like everything else.  I felt different for ten to forty seconds then felt exactly the same.  I’m just a miserable shithead, in that accomplishments don’t interest me when they happen.  They’re interesting to try to make happen.  So like, getting published is nice, but liking your own work is better.

I think that publishing something is never as good as making the something.  I mean it’s good because then other people can have it, but personally, it’s no better.  I’ve never felt a sustained feeling of satisfaction.  I get something done and then I think, “you’ll never do that again, you’re lost, you’re nobody, you have nothing to do, you are through, you’re shit.”  And I crumble my own cookies.

Scott Laudati: According to your site you’ve quit writing. In terms of being a writer you’ve “made it”. You’ve had several works published. The internet loves you. I have, and I know people who have paid for your books. How impossible is it to make a living writing?

But like, I don’t mind having jobs.  Don’t think I’d ever want to solely live off writing.  Seems too comfortable. Money is interesting to me in seeing how “even” I can be, like where I have expenses and then raise the money for them.

Scott Laudati: I read an interview with Jonathan Franzen, like, an hour ago to prepare for this interview. If you had one question to ask our most “famous” living writer, what would it be?

Sam Pink: I would make eye contact and say, “what’s it like knowing you’re looking into the eyes of someone who can probably defeat you in darts.” Then I’d nod upwards once, and laugh and say, “S’a crumbled-ass cookie.”

Scott Laudati: Even the reviews and comments on your writing are more entertaining than Jonathan Franzen. What does it say about literature that this form of “high writing” is what’s representing our era?

Sam Pink: I haven’t read anything by Franzen so I don’t know his work.  And I also don’t know what it’s like for something to represent an era. If that means what I am thinking it means, then Noah Cicero’s work represents my era well. Not even “my” era, like, the era of me. Here’s a blurb I just made up for his work, “Noah’s work is the closest I can get to staring right at the shit smeared mirror of myself.”  And then I see myself crumbling a cookie over the shit smeared mirror.

Scott Laudati:Your writing is sometimes gross, usually disturbing, hilarious and full of body parts and grime. Yet, it’s all pretty romantic. A really hot girl showed me my first Sam Pink book. Why do women find you appealing?

Scott Laudati: Would you go on a date with someone who didn’t know you but loved your writing?

Sam Pink: I’ll go on a date with anyone who buys me food.

[quote] I’ll go on a date with anyone who buys me food.[/quote]

Scott Laudati: The last post of your blog starts off with “life sucks dick. i’m giving up”, and ends with “have a life”. If you could go back would you choose the college, the career, etc? What will it take for you to come back to writing?

Sam Pink: No I’m just really moody and dramatic and sometimes I forget people read the blog.  I was just screaming at myself. I apologize to anyone who likes sucking dick who felt offended by that comment. I think the giving up thing is like how Muhammad Ali supposedly shit-talked his opponents not because he was an asshole but because he wanted to increase the challenge. By shit-talking his opponents, he set himself up for greater defeat and so he worked harder. I think by giving up I’m just trying to see if I can come back and make good things still. I would never complain about my life and I would never compare it to something else.

All works by Sam Pink, including Person, can be purchased on Amazon at
http://www.amazon.com/s/ref=nb_sb_noss?url=search-alias%3Daps&field-keywords=sam+pink