From Paul Schrader, writer of Taxi Driver and Raging Bull, it is wonderful to see Rolling Thunder make it to disc, Blu-ray, no less.

Titled after Operation Rolling Thunder, the US campaign against Vietnam, this revenge story has lost none of its impact, although viewers fresh to the title will be unperturbed by the violence on show. No matter. Said violence is secondary to the story, as is often the case.

So, it's 1973, and Major Charles Rane is freshly home from Vietnam, having spent seven years in a PoW camp. The town presents their war hero with the prize of a silver dollar for each day endured in the camp, but his wife isn't quite so welcoming, having long moved on, their interaction awkward. Charles' young son doesn't recall his presence, and assimilating back into society isn't easy, what with the flashbacks and insomnia, nights spent doing press ups.

One day, he goes home to find a group of men who want his silver dollars. The leader of the gang says the boys can make him talk, and herein lies the crux of the story; Charles is not an easy man to break, nor does he particularly care for mercy in his quest for revenge against William Devane is superb as our central character. The story opening as the men's flight home is ready to descend, all on board are nervous, and Charles' instruction to his closest compadre, Tommy Lee Jones' Johnny Vohden, is key to the story.

a disconnection from once familiar surroundings

"Put your glasses on." This one short line of dialogue immediately establishes Charles' state of mind; he may be safely home, but he anticipates a disconnection from once familiar surroundings. The shield of the sunglasses is a barrier between himself and society, and Devane conveys this detachment admirably. Jones is also very good, his anxiety in this initial scene palpable, which is impressive. The rapport between the two men is also convincing, again impressive, as the script is fairly minimal. 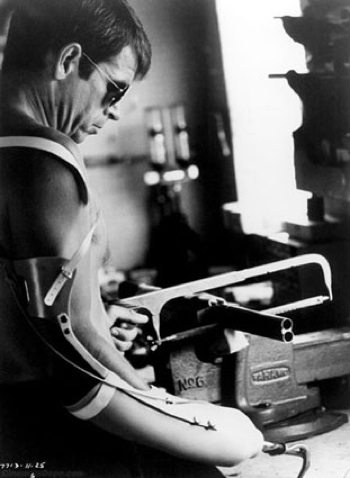 What is most important about Rolling Thunder is that the central characters seem enthused only by violence. The one moment in which we see Charles animated is when he demonstrates a particular method of torture experienced at the camp, in which the arms are tied behind the back and pulled up, as if about to hang the victim from the ceiling, with a bizarre eagerness that leaves the participant shaken. His explanation that you have to "learn to love the rope; that's how you beat them" alarms, the notion of an acceptance of such cruel acts unfathomable.

revenge will be exacted, and coldly clinical it will be indeed

And Johnny, up until now a very quiet and nervous character, lights up when Charles turns up in his uniform. No words needed, he instantly understands that Charles is ready for his revenge mission, and boy is he going to enjoy his role in it. This is a truly impactive moment. Will this man only ever experience pleasure in the infliction of violence? It's an uncomfortable notion. Relating to this is Charles' matter-of-fact response to the robbery which saw his family killed; there is simply no question that revenge will be exacted, and coldly clinical it will be indeed, his practicing putting cigarettes into a box with his new hook for a hand enabling fast gun reload later, and sharpening said hook.

The package could have been a little better, the extras on offer not particularly exciting, although a short interview with actress Linda Haynes is interesting, if only to witness a woman with clear regrets regards missed opportunities. The sound could also have done with some work. The film should, however, be viewed by any pondering war and its psychological consequences. And, if not made clear enough already, the acting on offer is simply fantastic.