I got a ton of tattoos, at first I bullshitted and said that every one meant something to me and it was some deep thing, and it really wasn’t. 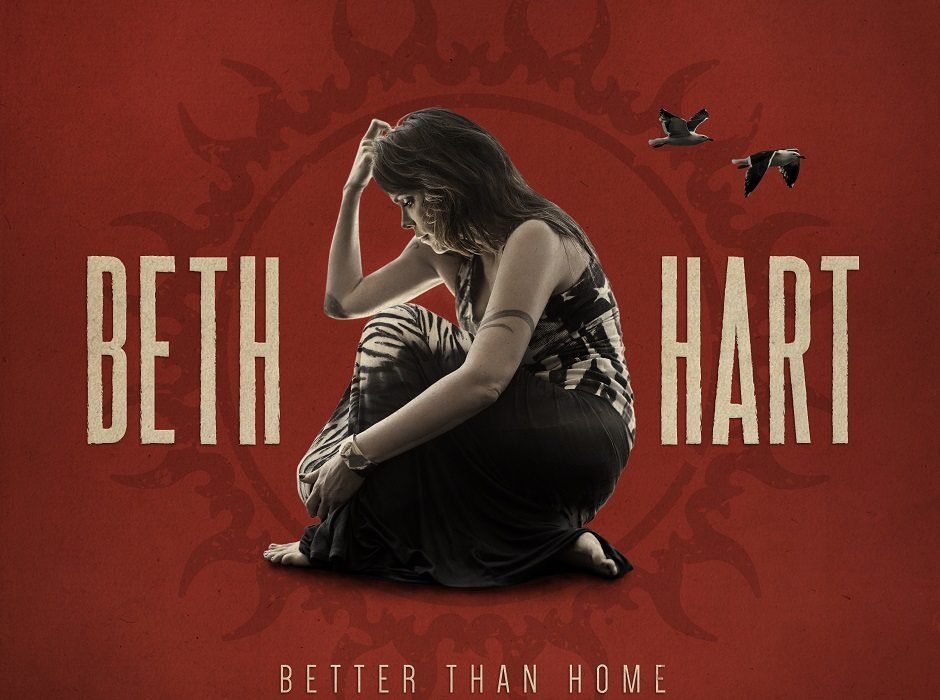 [dropcap style=”font-size:100px; color:#992211;”]’As[/dropcap] you age you get closer to truth and the essence of life. You stop taking yourself so seriously.’

So Beth Hart opines, relaxing in a London hotel and discussing new album Better than Home. The intense attitude of her wilderness years is not in evidence, giving way to a mature self-awareness that is new, and beguiling:

Beth Hart: ….You relax a little bit. Reconcile visually with the concept of aging and being honest. When I was in my late twenties I got a ton of tattoos, at first I bullshitted and said that every one meant something to me and it was some deep thing, and it really wasn’t. I mean, maybe for others.

This is the first record that I don’t have them out. I’m not showing them. They are not part of the image and if I do it’s because I have a sleeveless dress onstage. Yesterday I said ‘You know, I’m not showing my tats anymore and it was something that was always important to me before’.

Are you happy to be collaborative artist, like you were on this last record?

Were you happy to do that?

No. I wasn’t happy to do it at all (laughs). But like I say, the upside to having mental illness is that I have the ability to doubt myself and that doubting is good. Because my gut instinct is geared a certain way to how people see me. It’s good to let go of how people would perceive me and just focus on how my voice would sound.

This new style of writing, and breaking out of the style that you’d been doing before, what’s the response been like?

Good. We started for few weeks in the states and have taken a break to do the promo for this album and then we pick it back up in New Zealand and then we’re over here in Europe. But the response from the journalists has been really positive. And that means a lot to hear people say they connect with it and that makes me feel not so alone and not so crazy. It’s healing and helpful to hear that, especially on the shows we’ve done so far when the band was pushing me to stop being protective of the songs and to play them out. And when I’ve done that the response has been amazing.

I’ve been watching some of the 70s performances of Linda Ronstadt and there is an intensity in her performances that remind me of your own style. Have you drawn much from her?

Thank you for saying so! When I was growing up I loved listening to that Linda Ronstadt album with ‘Silver Threads’ on, it was a great one. It had ‘Desperado’ on it too [Rondstadt recorded Silver Threads and Golden Needles twice, firstly for 1969’s Hand Sown… Home Grown and 1973’s Don’t Cry which included ‘Desperado’].

That record was so great and I was just the littlest thing. I must have been around four or five years old and I remember sitting in my momma’s room right by the fireplace. The fireplace had a sort of nook, a tiny baby room that connected to the other room, perhaps for wood so that it could fuel both fireplaces, as there were two fireplaces back to back. So I would sit there and listen to the music, to Linda. It’s funny I’ve never spoken of that really, or about Linda. I loved her. I loved those songs.

The song and the title in particular represents this record perfectly because it’s all about facing a major fear. You see a big dark black thing and you go and you jump into it and then the most beautiful amazing thing is that you see that you are surrounded by this amazing light, that you found by going into the darkness. When you are there you realise it’s better than any dream you found in childhood. You are alive and fully in the moment. The song uses various metaphors, the road for example, on a surface level. But it’s a song of spirit, about dealing with dark and light.

Thank you, and see you on the road.

Read the first part of this interview with Beth Hart here

Next Story:
Piling it On : Television and Obese Children