RED FANG have announced a free show in London to round off their summer European tour dates. 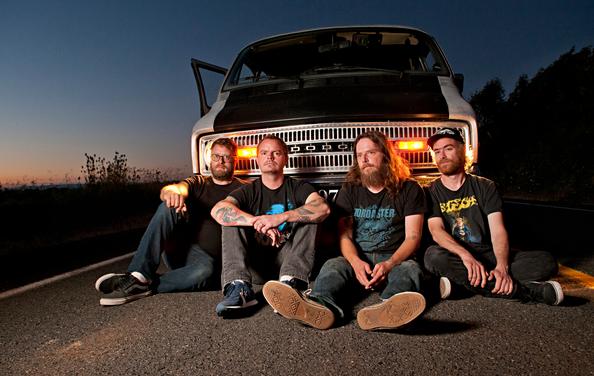 Red Fang, friends of welded-up stationwagons and enemies of milk, announce a free show in late August. Enjoy the riffage, don’t lend them your carkeys.

RED FANG have announced a free show in London to round off their summer European tour dates.

The Portland-based heavy rock band – who sold out the 1,100 capacity Electric Ballroom in March – will return to the capital on 24th August to play The Black Heart. The small, 150 capacity, venue that won the “Live Music Venue” award at the Music Week Awards 2014 will play host to the band following their appearances at Reading and Leeds Festivals that same weekend.

“Some of the funnest, most memorable shows we have played were house parties very early on. To have the opportunity to do something as close to that as possible at our favorite bar in London? Smashing!”

As a gesture of gratitude to their supportive fans – who have ensure that every time RED FANG have played London, the shows have been sold out – this event will be free entry. However, there will be a series of competitions running on the band’s social media between now and the 24th, to win guaranteed entry to the show, plus other prizes.

Those who are not lucky enough to win guaranteed entry can join the Facebook event for the show for updates, but are advised that tickets are available on a first come, first served basis from 5pm. Support will come from Trippy Wicked and The Cosmic Children of the Knight and GURT.

The show at the Black Heart is the final date of RED FANG’s European tour, and rounds off ten months of intense touring and promotional activity for the band since the October 2013 release of their critically acclaimed album Whales and Leeches.

Previous Story:
Why Guardians of the Galaxy Sucked