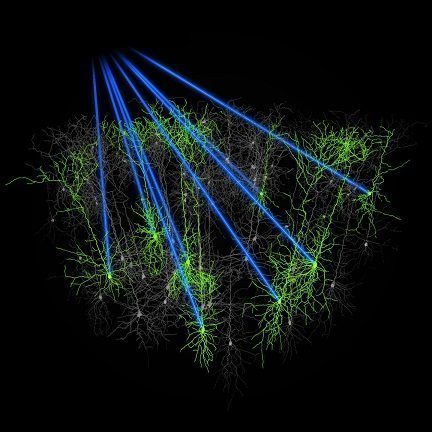 We’ll just erase those nasty old bad memories and re-write you with some nice holiday nostalgia. We have a Seychelles package on special offer at the moment that might interest you….

UCL researchers have developed an innovative way to understand how the brain works by using flashes of light, allowing them to both ‘read’ and ‘write’ brain signals.

The new technique, described in Nature Methods, combines two cutting-edge technologies for reading and writing electrical activity in the brain. First, genetically encoded activity sensors enable neuroscientists to engineer nerve cells to visibly light up when they are active. Expressing light-sensitive proteins in the same nerve cells then allows these cells to be activated with flashes of light. By combining these two techniques, the team was able to both observe and control brain activity in mice.

“Combining reading and writing of activity in the same neurons in the intact brain could revolutionize how neuroscientists can interact with and understand brain activity,” explains Professor Michael Hausser (UCL Wolfson Institute for Biomedical Research), senior author of the study. “One of the best things about having an extended conversation with someone is that you can really get to know them.

With time, their responses can give you a feel for the key questions to ask in order to understand their character. Just as we combine specific words into sentences that elicit a reply from someone we talk to, we used light to activate specific combinations of nerve cells in the intact brain and record how the other cells respond. In this way, we hope to be able to ask the brain questions and, from its answers, better understand how it works.”

To activate multiple brain cells simultaneously, the researchers split up the incoming beam of light using a holographic technique to direct smaller beamlets to individual cells of their choosing. The team selected a group of neurons in the cortex that are specifically responsive to the sensation of touch, reliably activating them while recording the flashes of activity in both the activated neurons and in hundreds of neighbouring neurons. This allowed them to ‘interrogate’ the circuit in a precise way, activating selected brain cells in different patterns and measuring how the circuit responds.

These experiments could be repeated in the same sets of neurons in the same animals over days and even weeks, allowing an extended ‘conversation’ with the circuit. In future, the team hope that by replacing a physical stimulus with precise, holographically controlled brain activity, the ‘neural code’ of sensory perception can be cracked.

“We are very excited to use this technology to probe the basis of how groups of neurons and ultimately the brain stores and processes information from the world around us,” says first author Dr Adam Packer (UCL Wolfson Institute for Biomedical Research). “This work provides a new way for neuroscientists to have a long-term and engaging conversation with the cerebral cortex in the brain of a mouse. Crucially, since the methods of both recording and activation rely on light, this technique is flexible and non-invasive.”

The nature of the ‘conversation’ depends only on where and when the researchers choose to point the light. Insights gained using this approach will be useful not only for understanding the ‘neural code’, but also for understanding how neural activity goes awry in neurological conditions such as autism and dementia.