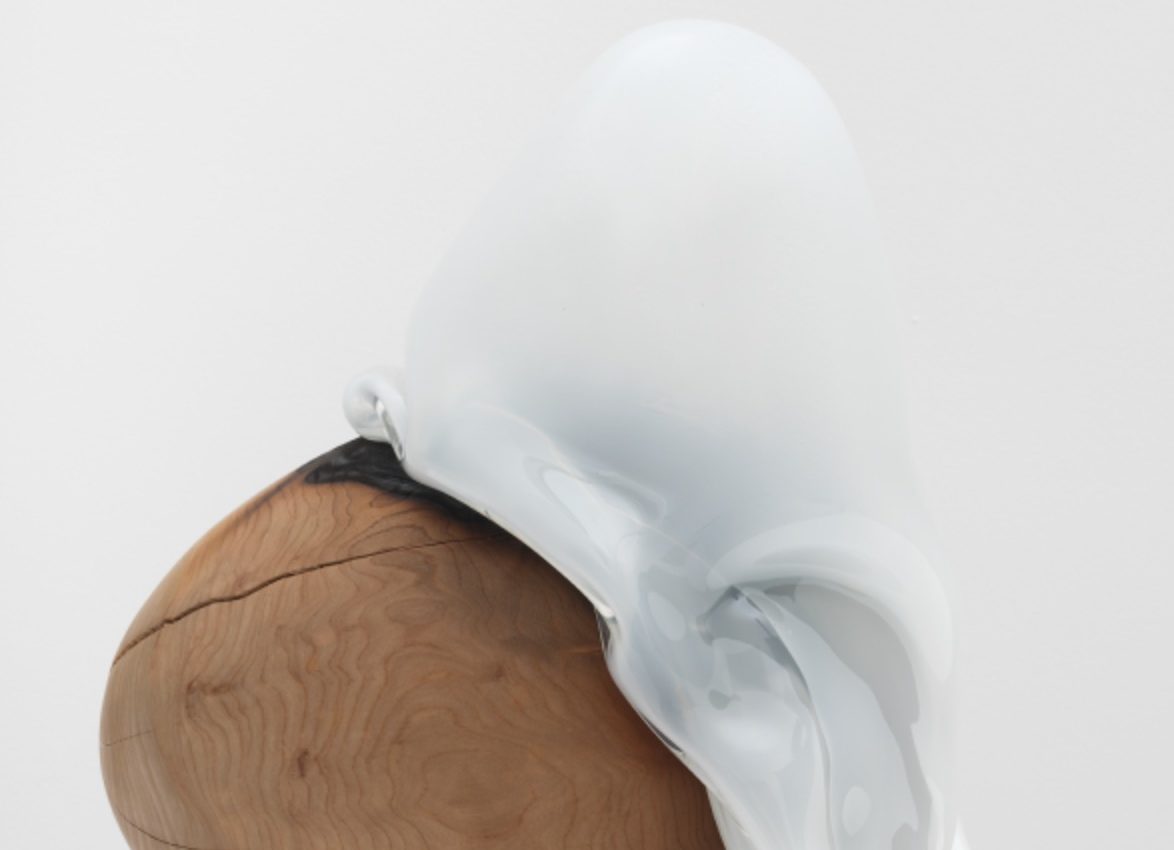 Multimedia artist Rachel Rose has built a reputation on making working with concepts around how humans situate themselves geographically and what that means, ecologically, mortally and a socially.

In her current works uses familiar elements from 18th Century landscape painters in order to bring the viewer into a perception of the world that describes a connection with the land that suggests a shared ownership. People to the land as much as land to the people, an indigeneity that many of us have little understanding of in the anomie of a transient existence.

Materials and presentation matter in her work and there is a interesting of confluence between her use of technology, ‘technology’ and the presentation of time. Time is often a dramatic force in narrative as it underpins change, transformation and historical context and in Rose’s work time present us with both an allegorical gulf and in the video movement a timeless accessibility.

The black egg is an object rich in meaning. It begs to be meaningful. But perhaps as an adjunct to its prominence you find yourself focusing on everything else but it. Visually, it seems to push the other details of the work away from it and towards the viewer. Possibly not the artist’s intention but the phenomena of being pushed away from such a profundity has a unique flavour that gives the intriguing exhibition added verve.

Pilar Corrias is pleased to announce a solo exhibition by Rachel Rose, the third with the gallery and the first across both of our spaces. Rose presents her newest video work Enclosure at Pilar Corrias Eastcastle Street.

Originally co-commissioned by LUMA Arles and the Park Avenue Armory, Enclosure unfolds against the social and political backdrop of the Enclosure movement – the large-scale privatisation of common land that transitioned England from a feudalist to a capitalist society, from an unpolluted landscape to a dramatically industrialised one.

The film’s story follows an imagined cult-like clan of land grifters, called the Famlee, led by Jaccko, a hustler who swindles people into selling him deeds to their land.

Recent, a teenage member of The Famlee, is essential to Jaccko’s hustle, and the film unfolds on Recent and Jaccko’s last predation, while above them looms a mysterious black orb, its inky aura drawing attention to the sky; its otherworldly presence is forebodingly cosmic. Through this imagined landscape, Rose offers insight into how the natural world was perceived at the time, and alludes to the scale of dire, industrial changes soon to come.

At Savile Row, Rose shows her Loops, a new series of sculptures, as well as a new set of paintings, titled Colores. In these works, pastoral landscapes idealised in 18th-century paintings by Gainsborough, Palmer, and Constable serve as the basis for a number of painting techniques Rose developed using pigments and metallic dusts. The weights of the colours, their related dry times, the gravity of the artist developed mediums all work together in minuscule and large scale shifts, unearthing the surreal energies latent in these actual landscapes. The material surrealism of these paintings expresses the mystical dimension of experience of landscape before industrialisation.

The Loop sculptures are composed of one material, silica, in two different states: glass and mineral. Rocks form over millions of years. Rock pulverised becomes sand. Sand heated and blown sets instantaneously and becomes glass. Together, blown glass and rock meet to produce an unnatural superimposition.

This exhibition will across both Eastcastle St and Savile Row galleries.

Next Story:
The Crossroad Blues and High Vantages of Oli Kellett Pt 2