Nightwish are the sort of band where the songs are bigger than the singer, but their material can be challenging regardless of who is singing it. Floor Jansen made a very strong impression, absolutely nailing material from both eras, and certainly seemed to have won over the audience. [dropcap style=”font-size:100px; color:#992211;”]L[/dropcap]osing one singer is unfortunate, but losing two can look like carelessness.

Back in 2004 Finland’s Nightwish publicly sacked their original singer Tarja Turunen. Her eventual replacement Anette Olzen rather divided fan opinion. Many welcomed her versatility that enabled Nightwish to branch out musically, but there remained a noisy “No Tarja No Nightwish” faction. Then just a few weeks ago Nightwish and Annete parted company in the middle of the US leg of their tour.

Rather than abandon the tour, former After Forever frontwoman Floor Jansen stepped unto the breach and hit the ground running, taking over the microphone with little or no time for rehearsal. So when Nightwish came to a packed Brixton Academy in London, the big question was what would they be like with Floor? How would she interpret the songs associated with the two previous very different singers? Certainly the word on the net from people who’d seen them earlier on the tour was overwhelmingly positive, which was encouraging.

Support act Pain were entertaining. Very tight, with a frontman who can switch between screams, growls and an impressively powerful clean baritone with ease. While there were some anthemic choruses and some strong riffs, it was all a bit one-paced, which was perhaps their weakness.

There was a buzz of anticipation before Nightwish hit the stage. Once they did, it only took a couple of songs to blow away any doubts about the ability of their new singer. Floor has both the operatic power of Tarja with the versatility and expressiveness of Anette. She’s got a strong stage presence as well, even though it was bassist and supporting vocalist Marco Hietala who did the majority of the song introductions.

The early part of the show was very metal, starting with “Storytime” from the band’s most recent album and following with a couple of the heaviest numbers from Once, their last album with Tarja.

Half a dozen songs on they slowed things down with the jazz-flavour ballad “Slow, Love, Slow” before Troy Donockley joined them on stage on Uilleann pipes and assorted whistles for a Celtic interlude, which included the instrumental jig “Last of the Wilds”, and “The Islander” sung by bassist Marco Hietala. Troy was to return later in the set for a storming cover of Gary Moore‘s “Over the Hills and Far Away”. 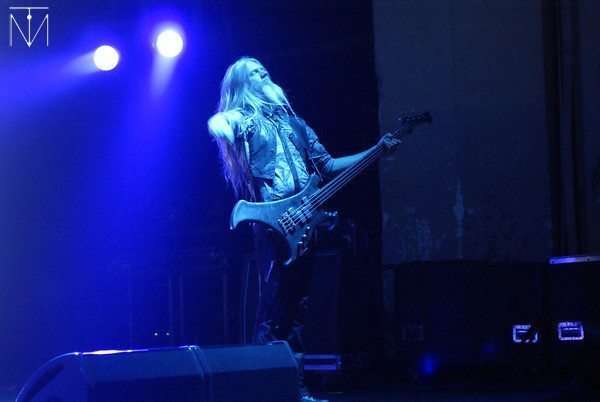 They eventually ended with the symphonic epic “Ghost Love Score” followed by “Last Ride of the Day” to round off the set. No encore, and the band took their final bows to a recording of the orchestral instrumental “Imaginaerum”.

Yes, they did make extensive use of backing tapes for the operatic numbers, especially on songs like “Ghost Love Score” towards the end of the set. There was even a moment where no actual musicians were on stage. It’s probably the only way they can reproduce the full sound of their records without taking the choirs and orchestras on tour.

But given the circumstances, this gig was really about the new vocalist. Nightwish are the sort of band where the songs are bigger than the singer, but their material can be challenging regardless of who is singing it. Floor Jansen made a very strong impression, absolutely nailing material from both eras, and certainly seemed to have won over the audience. While they have yet to announce whether or not her position will become permanent, with performances like that one, she does seem an ideal vocalist for the band.