‘themes of angst and resentment rage against the hagiography, by self and others, of youth’

[dropcap style=”font-size:100px; color:#992211;”]O[/dropcap]n a good night Mudhoney capture the energy and power of rock at its absolute pinnacle.

If you’ve never seen Mudhoney then chances are you’re only aware of the band as namechecked by the more (commercially) grandiose rock of Pearl Jam, Soundgarden and Nirvana.  If this review prevails in any sense then you, dear reader, MUST see Mudhoney live and without delay.

a venue and creates

a sonic palace of

Mark Arm contains enough vigorous sarcasm and Generation X hatred to propel a second generation of garage punk attitude.  And when has there been a riper time for late school disaffection with the arch bitches of contemporary society politicians and corporations? When the groundswell of anti-establishment thinking is reaching around the globe, pulling youths out their dream-sodden beds and into the hormonal streets of societies leaving the turgid paternalities of home and striking loud an angry chord.

The first time I saw Mudhoney in 1993 I missed their power, I didn’t think much of their performance, and they were plagued by poor sound and heat. A mid-afternoon festival gig, there set was short, powerful,  but sloppy also dangerously hot. The Australian summer at it’s apex burnt performers and audience alike, so hot that the fire department was called in to hose down the crowd.

This created mud which was quickly thrown en mass at the band. 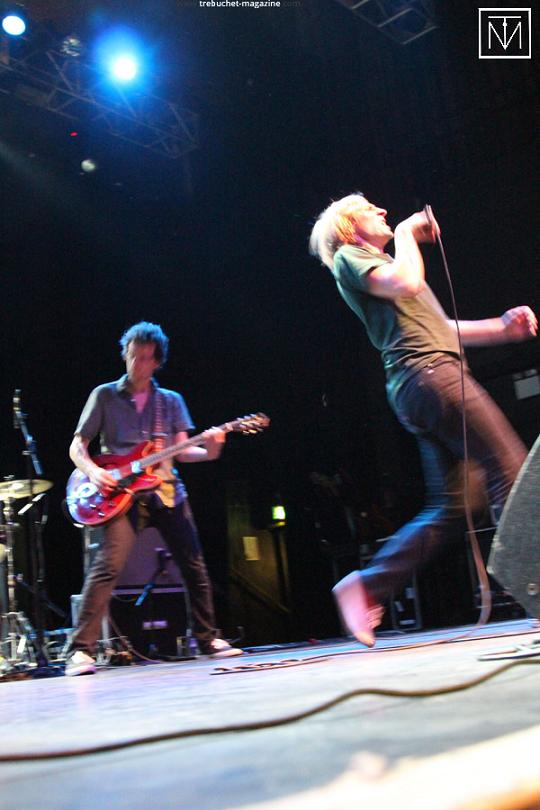 My lasting memory is of Mark, arms out wide, receiving the thick brown sacrament that soon coated the whole band, their equipment and their crew. There’s a persistent story that for years later (perhaps even to this very day) at the bottom of their speaker cabinets is an inch of Adelaide mud from when  Grunge ruled the world.

Fast forward twenty years and the Forum is packed with adoring of fans screaming after the first songs and carefully swaying for the rest of the proceedings. The band is tight and extremely focussed, Mark has never looked better and stalking the stage at once a petulant man baby and deranged sociopath.

Lyrically there’s never been a lot of tenderness or nostalgia in Mudhoney’s music and there’s less so on Mudhoney’s latest album Vanishing Point where themes of angst and resentment rage against the hagiography, by self and others, of youth. It’s an album which weighs heavy in the set and if anything was missing from the studio recording it’s been found on stage, where harmonies become elevated though noise and repetition.

Mudhoney look good onstage, they look weirdly young and when the tracks like ‘Suck you Dry’, ‘Sweet Young Thing’, ‘Touch Me I’m Sick’, ‘In ‘n Out of Grace’, cut the audience apart like a buzzsaw of razors you’re in the majestic company of a band that takes a venue and creates a sonic palace of revolt, need and the purest revelations of rock and roll.