“Seriously, the Wacken show was special,” Jourgensen says. “The crowd was great and the band were so tight and heavy, they blew everyone away.”

MINISTRY are back on the big block with an even bigger album of blistering live material from the final show of their 2012 “RELAPSE” tour. It was the perfect event for Ministry to shoot their final live DVD. Frontman Al Jourgensen was still battling severe dysentery when he took the stage at Wacken Open Air fest on August 3, 2012 in front of 75,000 screaming fans. Through sheer willpower he was able to hold himself together and perform in Wacken at his utmost peak with a band of traveling bandits he considered close friends as well as gifted musicians.

Tragically, Ministry’s longtime guitarist and Jourgensen’s best friend Mike Scaccia died less than five months later after tracking songs for Ministry’s final album From Beer to Eternity, which is scheduled for a September 6, 2013 release. “Mikey was in his version of heaven at Wacken,” Jourgensen says. “His guitar playing was the heart and soul of Ministry and he loved that band more than everyone – even me. He’s the one who convinced me to continue when I swore I was done with it.”

this DVD a great

the time of his

life, it’s one of

videos of the band

ever[/quote]
That album is dedicated to the memory of Scaccia, as well as Ministry: Enjoy the Quiet – Live at Wacken, which will debut at the already sold-out 2013 Wacken Open Air festival in Germany August 1-3, 2013.  The project is a collaboration between 13th Planet Records and UDR/Wacken Records GmbH.

Jourgensen says: “Not only is this DVD a great recording of Mikey at his absolute best performance, in his element, having the time of his life, it’s one of the last live official videos of the band ever. If you didn’t see the tour, you’ll want to catch what you missed. And if you were there, well, you saw a piece of history and the DVD will make a great souvenir — or a great drink coaster.”

Ministry: Enjoy the Quiet captures the transcendent chaos of Ministry’s sixth to last performance in all its kinetic glory. The fourth live Ministry release, the DVD may be their best yet. The members were all clean and the chemistry between the musicians was spellbinding. 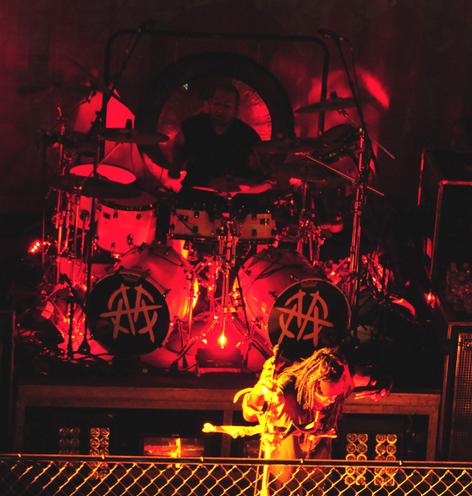 “Seriously, the Wacken show was special,” Jourgensen says. “The crowd was great and the band were so tight and heavy, they blew everyone away.”
Usually bands at major festivals draw major reaction for their greatest hits and the audience members cross their arms when the groups play their newer material. But the Wacken crowd was just as excited to hear Ministry blast through songs from their 2012 album Relapse– the show opener “Ghouldiggers,”  “99%ers” and the title track — as they were to hear “New World Order (N.W.O.)” from the band’s 1992 classic Psalm 69: The Way to Succeed and the Way to Suck Eggs.”

Enjoy the Quiet was shot in high-definition video on a multitude of cameras with 5.1 stereo sound. The DVD features eight songs from the last four Ministry albums, “Just One Fix” and “New World Order N.W.O” from Psalm 69 and “Thieves” from 1989’s The Mind is a Terrible Thing to Taste, the record that established Ministry as an industrial metal force long before the genre had a name. The DVD also features music videos for “Ghouldiggers” and “99%ers,” shot by Zach Passero.
The 2012 Wacken performance marked Jourgensen’s second appearance at the legendary festival. Ministry had previously played Wacken in 2006 on their Rio Grande Blood tour the same day as Amon Amarth, Celtic Frost, Children of Bodom, Carnivore, Six Feet Under and others.

With 16 million records sold worldwide, six Grammy nominations and kudos from industrial and metal bands including Nine Inch Nails, Slipknot and Korn, Al Jourgensen has earned the title “godfather of industrial metal.” Subversive, political and ever able to develop new methods of sonic demolition, Jourgensen remains the voice of generation anarchy at a time when most rock veterans have relented to releasing half-assed albums and touring a yearly greatest hits package to maintain the upkeep on their mansions.

Next Story:
Demonstrations Against The Racists This Saturday – Update