Make Better Music 59: It’s not what you put in, it’s what you get out

One of the joys of music is that it always has something to say that’s worth listening to, even in tracks that you have heard a hundred times. There’s a richness and enough ambiguity of expression to keep finding more and more in there.

It was never really my thing to present my own music as expression of my own emotions.

A couple of my idols were notable for shunning self expression, instead steadfastly writing music about subjects they wanted to enlighten the audience about.

I thought I fitted into that category, but it’s funny how your own music can suddenly reveal a load of feelings that you didn’t know you’d put in there.

I normally write songs as stories, or as evocations of some idea or picture I get in my head. For a while I had this vision of a world reduced back to a sort of medieval state by some unknown disease… like a modern plague, and I wrote some songs as a sequence of “tableau” to express those ideas. There was also this idea of making “sick” music…not in the slang sense of being awesome, but as in making the music sound distressed and diseased…

Other times I got into using numbers and sequences of patterns to generate musical interactions – again this is something that seems quite unemotional, until you get a little time between making it and listening back. The source is always your creative imagination of course – so there is always something of yourself in there, no matter what you make.

So once again, looking back over this old music, there is all this feeling there that brings back memories for me.

Then there are the story songs – these often get confused for autobiographical numbers, especially by people that know me. But for the most part they just use my own experiences as a springboard for my imagination (which is not very prolific when it comes to stories) and I piece together the idea for a little narrative.

Once again, even something as impersonal as a narrative about someone else reveal my own feelings and what was on my mind at the time.

I suppose everything gets funnelled through your perceptions and is coloured by how you are feeling right at that moment.

One of the joys of music is that it always has something to say that’s worth listening to, even in tracks that you have heard a hundred times. There’s a richness and enough ambiguity of expression to keep finding more and more in there.

I’ve said before how it doesn’t matter what the creator puts into their music – the listener will get something out regardless. See John Cage’s intention-free music (free from all intention aside from the intention to make intention-less music though!)

I always say to people that music is an interface between two or more living things, via a medium that neither side really understands. People tend to react with a blank look, and then try to avoid me!  But I think it’s an interesting point to consider – slightly alarming yet comforting too.

The mystery of the process is part of the magic though, while music is mysterious it will always be enticing and enjoyable. I’m certain it is an essential part of human existence, it seems so much more necessary than any of the other arts. 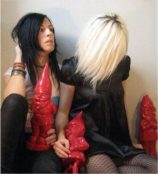 Next Story:
Creative Journey: How to Curate Abroad