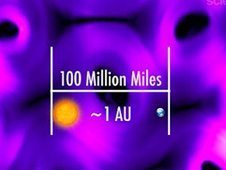 NASA's Voyager probes are truly going where no one has gone before. Gliding silently toward the stars, 9 billion miles from Earth, they are beaming back news from the most distant, unexplored reaches of the solar system.

It's bubbly out there. Magnetic bubbles at the edge of the solar system are aboout 100 million miles wide–similar to the distance between Earth and the Sun. Credit: NASA According to computer models, the bubbles are large, about 100 million miles wide, so it would take the speedy probes weeks to cross just one of them. Voyager 1 entered the "foam-zone" around 2007, and Voyager 2 followed about a year later. At first researchers didn't understand what the Voyagers were sensing–but now they have a good idea.

"The sun's magnetic field extends all the way to the edge of the solar system," explains Opher. "Because the sun spins, its magnetic field becomes twisted and wrinkled, a bit like a ballerina's skirt. Far, far away from the sun, where the Voyagers are now, the folds of the skirt bunch up."

When a magnetic field gets severely folded like this, interesting things can happen. Lines of magnetic force criss-cross, and "reconnect". (Magnetic reconnection is the same energetic process underlying solar flares.) The crowded folds of the skirt reorganize themselves, sometimes explosively, into foamy magnetic bubbles.

"We never expected to find such a foam at the edge of the solar system, but there it is!" says Opher's colleague, University of Maryland physicist Jim Drake.

Theories dating back to the 1950s had predicted a very different scenario: The distant magnetic field of the sun was supposed to curve around in relatively graceful arcs, eventually folding back to rejoin the sun. The actual bubbles appear to be self-contained and substantially disconnected from the broader solar magnetic field.

Energetic particle sensor readings suggest that the Voyagers are occasionally dipping in and out of the foam—so there might be regions where the old ideas still hold. But there is no question that old models alone cannot explain what the Voyagers have found.

Says Drake: "We are still trying to wrap our minds around the implications of these findings."

The structure of the sun's distant magnetic field—foam vs. no-foam—is of acute scientific importance because it defines how we interact with the rest of the galaxy. Researchers call the region where the Voyagers are now "the heliosheath." It is essentially the border crossing between the Solar System and the rest of the Milky Way. Lots of things try to get across—interstellar clouds, knots of galactic magnetism, cosmic rays and so on. Will these intruders encounter a riot of bubbly magnetism (the new view) or graceful lines of magnetic force leading back to the sun (the old view)? 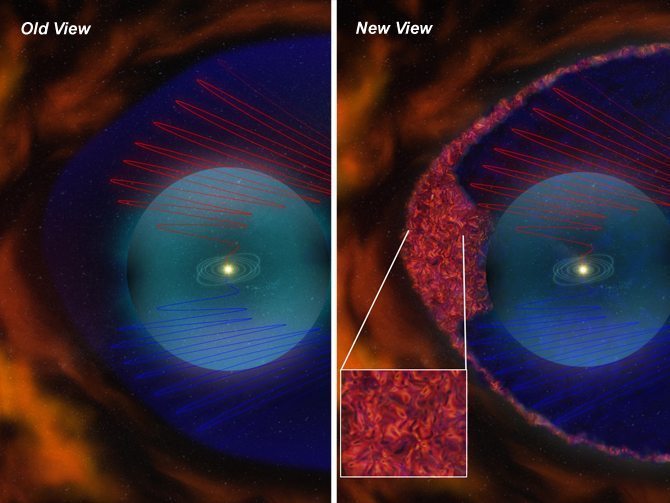 The case of cosmic rays is illustrative. Galactic cosmic rays are subatomic particles accelerated to near-light speed by distant black holes and supernova explosions. When these microscopic cannonballs try to enter the solar system, they have to fight through the sun's magnetic field to reach the inner planets.

"The magnetic bubbles appear to be our first line of defense against cosmic rays," points out Opher. "We haven't figured out yet if this is a good thing or not."

On one hand, the bubbles would seem to be a very porous shield, allowing many cosmic rays through the gaps. On the other hand, cosmic rays could get trapped inside the bubbles, which would make the froth a very good shield indeed.

"We'll probably discover which is correct as the Voyagers proceed deeper into the froth and learn more about its organization," says Opher. "This is just the beginning, and I predict more surprises ahead." 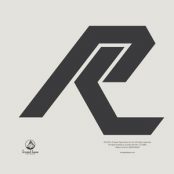