Cycling London’s Undercurrents: The Curve of the Tyburn

Following the hidden rivers of London is an exercise in history, sociology, architecture… and exercise

which mapped out walking routes to follow them flowing below our feet; sometimes heard, but rarely seen, invited me to explore the Tyburn river that began up under Hampstead Heath, flowing in and out of Regents Park to Baker Street, passing near my Marylebone office before crossing Oxford Street to Buckingham Palace and finally into the Thames in sight of Vauxhall Bridge.

I’d just bought a folding bike for commuting, no Lycra or Velominati rules applied, but I wanted an excuse to cycle more than to my Welbeck office and back, dodging belligerent black cabs.

It seems obvious in hindsight, but the route of any hidden river follows an inevitable twisting downward slope (see picture, right), 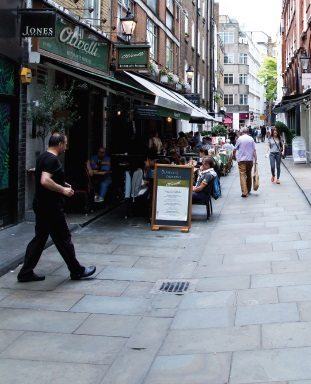 so cycling alongside it is easy, often freewheeling, giving a chance to understand how it connects a weaving thread through London’s streets.

Rivers make for natural and obvious boundaries. Marylebone is no exception, and cycling south down its (Thayer) High Street, the Tyburn is underneath, to the right the west bank of the Portman Estate. There, Henry VIII’s Lord Chief Justice, Sir William Portman, leased the Lilleston (Lisson) manor before buying the freehold. On my left on Tyburn’s east bank is the Howard de Walden Estate, purchased in 1708 and passed on to Henrietta, wife of Edward Harley; next Margaret Cavendish Harley before it was inherited by Lucy Bentinck, widow of Baron Howard de Walden with the merger and renaming of the Portland Estate.

The key to the success of the great London Estates over these five or so centuries comes from the leasehold system of land tenure that lets out plots of land to developers or builders before inevitably returning to the landlord with whatever was built once the lease expired. As the lease clock ticks, often just once a century, fashions and trends create or demolish, laying down another strata of architecture and streets onto a river’s neighbourhood.

The sense of a distinct Edge Land emerges as I cycle the river boundary where two Estates meet and their buildings back up onto what was once an open sewer, in combinations of Georgian, Victorian, Edwardian or modern styles, permutating into commercial, residential and recreational uses whenever the lease clock ticked.

The fashionable city grid layout began with the wealthy living spread north to south along a road catching the sun, whilst tradesmen and poorer occupants lived west to east. This grid was copied in Manhattan, the Big Apple, from its core laid out here by the Tyburn. Suddenly this grid is interrupted and disintegrates into a winding and meandering Marylebone Lane chasing the Tyburn water flowing down an unexpected course. The gradient change is slight, but listen to your knees if walking and you’ll suddenly feel the river’s gentle gradient, my bike can tell me too as it is now freewheeling, letting the river take me down its ambulatory course towards the Thames.

Next Story:
Want More Attentive Kids? Get Them to the Green Spaces