Unsettling and incisive, Lisa Black’s artworks ask questions of the viewer and our approach to nature

[dropcap style=”font-size:100px; color:#992211;”]E[/dropcap]
ver since my first visit as a child to the Natural History Museum in Exposition Park where two large halls house more than thirty habitat dioramas, the art of taxidermy has filled me with feelings of awe and wonder.

Let it be known: I do not condone hunting in any shape or form and

therefore have had trouble accepting an industry whose largest profits come from trophy mounting. But, as explained in Robert Marbury’s book Taxidermy Art, “the business behind trophy mounting [has motivated] technical developments” and, more importantly, the enactment of laws to protect animals, namely those that are endangered.

Marbury’s book, however, isn’t just a primer about the practice. Admittedly, it does come complete with a history of taxidermy, as well as an overview of its key pioneers. However, it also provides a detailed look at artists worldwide whose work is exemplary of Rogue Taxidermy: “a genre of pop-surrealist art characterized by mixed-media sculptures containing traditional taxidermy materials used in an unconventional manner,” (as defined by Marbury himself).

While every artist featured in Taxidermy Art is deserving of mention, Lisa Black‘s sculptures demanded my immediate attention when I first flipped through the book’s pages. The artist’s collection Fixed, which has what Marbury describes as a “bionic quality — part animal, part machine,” is truly breathtaking.

Like most practitioners of Rogue Taxidermy, the Auckland based artist uses her medium as a vehicle to address issues of environmental stewardship. Not only is Black “a highly passionate person with a deep respect for the animal kingdom,” as iterated by Jesse Ship for Format Mag, but her work reflects her desire to encourage the reexamination of man’s relationship within the natural world. 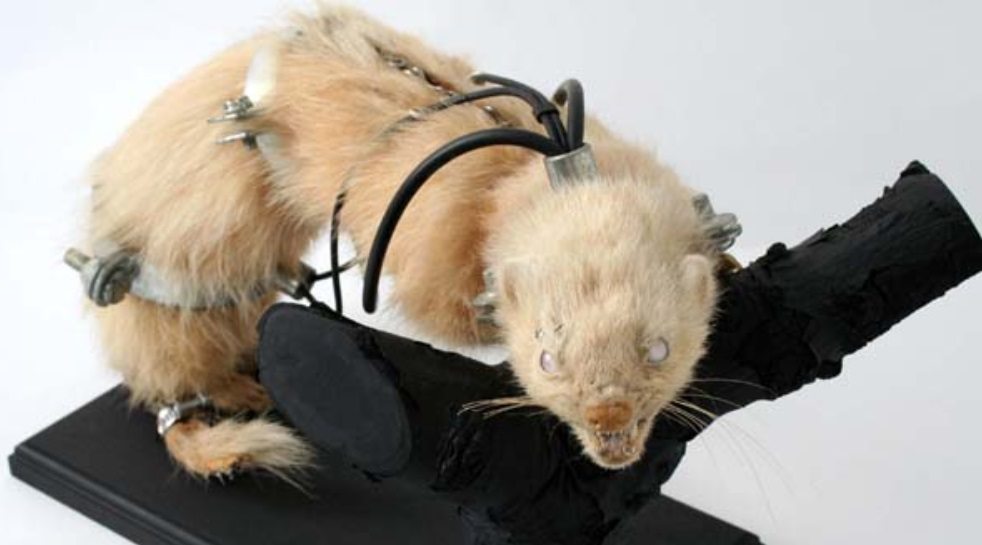 Working with recycled taxidermy that she finds broken or damaged, Black interweaves technical elements into her subjects in an attempt to “fix” them. Contrary to what one might think, the inclusion of her precisely placed mechanisms does nothing to distract from the delicacy of her subjects. Rather, it is the incorporation of such that testifies to her ultimate love for animals and their form.

Previous Story:
Get Yo Head Out Da Bassbin! Moving Objects With Acoustics Alone

Next Story:
Parents’ Terror at Physical Activity Guidelines for Kids