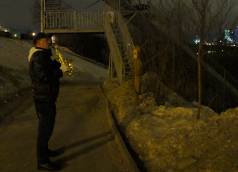 Anger fuelled techno label Ohm Resistance have described their sound as “the price of revolution”.

So with this rebellious streak in mind, Trebuchet Magazine interviewed owner and instigator Kurt Gluck on the importance of bass, defiance and experimental DJing.

A music label like no other, Ohm Resistance was founded by avant-garde drum and bass DJ Submerged, aka Kurt Gluck. This label encourages its artists to produce raw fusions of sounds and perform intense and occasionally volatile live sets. Emerging in 2002 in Brooklyn, Ohm Resistance became the buzz word for artists who liked to raise hell with music. Kurt Gluck’s label grew strong, with a horde of anti-establishmentarian talents at it’s disposal. And he made good use of them for his latest psychotic and thrashing release ‘Before Fire I Was Against Other People’. What about the label though? Will it continue to produce nightmarish and excellent tracks, utilising the skills of evil DJ’s and hard core thrash metallers? Trebuchet decided to find out from the man himself.

Trebuchet: Tell me about Ohm Resistance?

Kurt Gluck: Ohm Resistance really began in 2000 as that was the first time I got to visit Mick Harris to make tracks with him. It was intended to just be a series alongside M. Gregor Filip's experimental label Collision Substance… and the whole thing just took off way further than I could control it.

DJing and making tunes is now our conduit to the world.

Now here I am in 2011, and we've got an office open of our own. We're making and releasing interesting music projects regardless of genre or trend, and I get to work with all the people whose records I loved and grew up on when I was younger. Also my group of people including the visual artist Khoma, producers such as Scorn and Joel Hamilton have developed a true independent signature as Ohm Resistance. It's something I am truly proud of, and something that will continue to evolve and reshape itself as our collective artistic desires grow. What began as just a passion for vinyl records, DJing and making tunes is now our conduit to the world.

Trebuchet: Tell me about the Blood of Heroes album?

Kurt Gluck: Blood of Heroes really started as a Method of Defiance record that was too extreme for them. I wanted to have Enduser and Justin K Broadrick on the record, and Bill told me he was open to having the line up change every record. But it was at this time that he was also growing comfortable with live performance (most likely since I wasn't blasting complex beat structures at him anymore off the laptop!) and wanted to settle the group down, so the name had to change. The name Blood of Heroes came from Dr. Israel (the vocalist who I've shared a living space and studio rentals with for years), who took it from a Rutger Hauer film.

The self-titled first record and the remix album “Remain”, had really strong listeners and press response, and we're quite happy with how they all turned out (in fact Ministry of Sound licensed a track from the remix album for their Adventures in Dubstep Volume 2 compilation, complete shock!). So we have to keep raising the bar. We've just begun work on the second album and we're going to do another remix album as well, with just one remixer doing the whole album. It’s going to be something very special and I can't reveal the details of that yet, but it's no one inside the Ohm Resistance crew, but someone that should be familiar to Ohm Resistance/good music fans…

On the new Blood of Heroes you're going to hear a lot more Balázs Pándi on tom tom drums and also Joel Hamilton as the weasel guitar this time out. Bill Laswell will stop by for a guest slot but
I'm taking over the bass guitar duties for most of the record. Hopefully the creative dichotomy that Enduser and I have will continue to produce an interesting writing situation. I just got back the confirm from Justin and he's ready to record, so it's up to us to get the first drafts onto him and we go from there!

Trebuchet: Do you have any funny stories to tell from touring?

Kurt Gluck: Always. Scorn and I were on tour together this spring, and when Mick and I are in the same place it's always trouble. We even called our tour NO HATE NO GAIN and nearly no one used the tour title, deciding it was too negative (in Budapest we were Welcome to the Jungle!).

In Moscow we were meant to go to Red Square at like 2am after the gig to take photos, but we got completely waylaid and ended up at some Potato House near a ski jump in the middle of Moscow. Apparently we were hanging out with a Russian Television actor, who had a soprano saxophone and was really wearing Mick out. I took his saxophone away and gave a few good Marshall Allen / John Zorn blasts on it, and we never saw Red Square on that trip, but it was a great time!

In Diskmuide, Belgium, after performing bass with Scorn onstage and while I was setting up to play my Submerged set, a small group of people decided they would start slow clapping at me and jeering me to hurry up and get set up quicker. It takes the time that it takes, so I said “hang on, quit the slow-clapping it's almost ready”. The rudeness continued, so I decided to solve the problem in my way. I came offstage right before people and lashed one of the slow clappers into the wall. After the red mist subsided I realised I was holding a barstool and was surrounded by people who were truly offended and unhappy. It was awesome.

And in Krakow, we had an amazing, beautiful show, on a proper bassy sound system and were treated like kings by Radiofonia, one of the best new organisations I've been lucky enough to work with.

Trebuchet: Why does electronic music appeal to you?

Kurt Gluck: That's a good question. I've always played video games, always mucked about on computers. I worked a desk job writing software from when I was 19 until I was 24, so I put in my office years very young, and then I realised I never wanted to do that again for someone else's profit. So I made music the entire focus of my life. DJed drum and bass in the competitive DJ world for a decade, and now here I am back to what I enjoy the most – playing punk bass lines against electronic beats. I think it's a unique thing and I enjoy doing it. I love being able to have the machines do what I need them to, and not have to stress whether a human will fail me, as most of them do, over and over again.

My beginning interest in electronic music however did come from Godflesh, as they were the ones who first introduced the concept of a drum machine to me. So I bought an Alesis SR 16 drum machine and learned how to program that. I then went onward to an EMU sampler and made whole songs off that (the first few Submerged records on Ohm Resistance were all EMU). And now I have a hybrid software/hardware setup. I went to school to study Electrical Engineering, and that's in fact where the Ohm Resistance name sort of comes from – it's a stupid but consciously redundant phrase spun out of electrical measurement of the force of resistance.

I do really enjoy the dynamics of working with computers and machines and also I love trying to leave people guessing. Is that a machine? Is it a machine played by a human? Is it a cyborg playing an
instrument? There are a lot of questions that you can leave up to the listener to figure out and as a listener myself, that’s where I find it interesting.

Trebuchet: Tell me about your new album 'Before Fire I was Against Other people'? 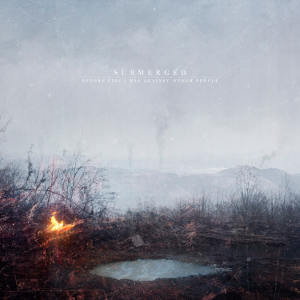 Kurt Gluck: OK! So the title comes from a conversation I had while standing in line with a drunken Russian ex-border guard in Chelyabinsk. I couldn't tell whether he was being threatening or friendly the whole time, and it actually was a bit tense for a few minutes. But I got out of it with the phrase "Before Fire I Was Against Other People" burned into my brain… I had to use it!

The album is really all over the place, from guitar based tunes to drum and bass full force to dubstep. It's a mix of what I like, in an order that I think makes sense and leads one through a journey that
just gets darker and darker, till the last 2 minutes of “Dead” which is about as finely an architected seven drum kit battle chaos as I can make. I’m officially throwing the gauntlet down to Lynn Enduser and saying “if you can top that, I’ll go in again, back at you”.

The album comes from a lot of places, mostly being limited over several years by choice of occupation. I’ve been bursting to write my own music and try to capture how I’ve been feeling and the realisations that accompany abandoning societally acceptable citizenship. The last few years were an amazing time in my life and revealed many things to me about the human character: most people are greedy; most people will let you down and are entitled, spoiled pieces of shit. The few people you find in your life that are dependable, loyal, creative and know how to DO WORK, those are the ones you keep close to you.

Trebuchet: Do you have anything else you wish to share with us?

Kurt Gluck: Actually I do! With how many different styles of music I had been attacking on the new Submerged album. I definitely feel the need to start establishing some boundaries, otherwise I’d just let myself run crazy and do a full crossover album of Cambodian traditional music and grindcore. So my announcement is this:

Going forward, Submerged will be for beat-based music. I will still play my bass, and do interesting things on recordings for sure, but live I’m going to focus on the electronics with Submerged. Now that I’m going to take over most of the bass duties in Blood of Heroes, I’m happy to leave Submerged to live beats and electronics, and use my bass in the other groups that I play in. It's more fun to play when you have other humans to respond to.

So yeah, I’m starting to define Submerged a little bit again and while at first I thought it would be limiting to do so, it is actually quite liberating to simplify the project. I’ve got a new EP with guests for Submerged that I’ll complete before summer’s end, and that’s going to be strictly slow beats and bass music. Working title is "So I Suppose I'll Have To Take Up Fishing Now".

Find out more about Submerged and Ohm Resistance here. www.ohmresistance.com