A man without arms is like a bear without hair.

Yep, that’s what he said.

They haven’t made a bow big enough to fit all of Tav Falco’s strings on; if they had it’d be fucking massive. His much applauded recent London show with Panther Burns wasn’t enough for Falco so naturally he immediately follows it up with a book presentation.

The aforementioned show, by the way, was not only attended by his faithful fans. Morrissey’s go to guitarist was looking for pointers, the immaculately dressed Bad Seed/fleeting Cramp and one time Panther Burns bandmate big Jim Sclavounos, and not forgetting raven-haired jazzer Florence Joelle were also on the maestro’s list. Everyone loves Tav Falco. 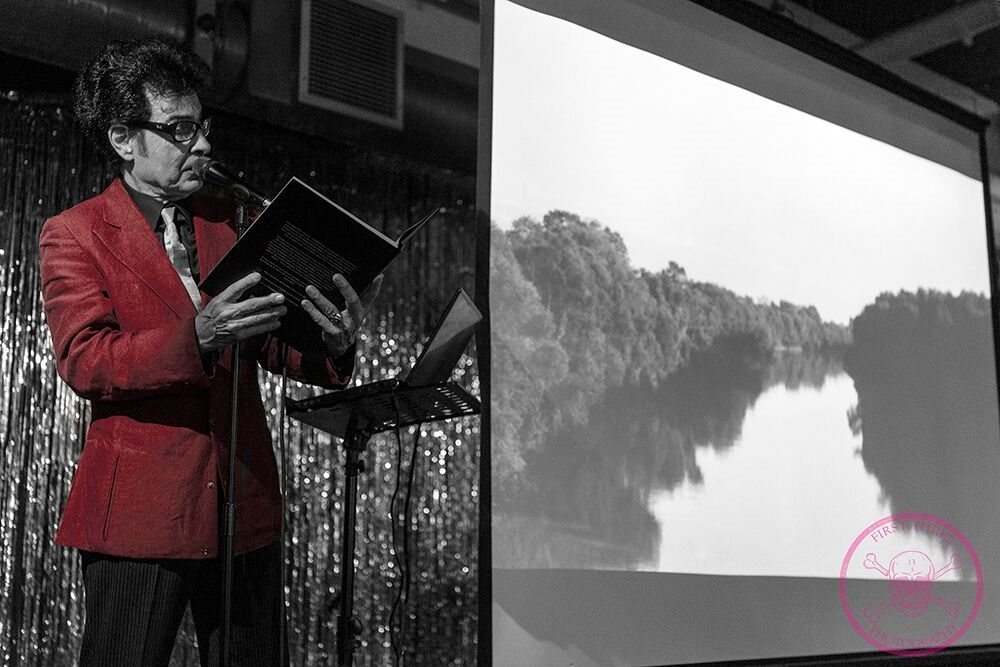 So Mr Falco is mid-tour, yet pops up like one of the trendiest pop up establishments in the heart of hipster paradise, just off the pissy pavements of Brick Lane at Rough Trade East. He is there to present his very latest and much anticipated artwork in the form of a rather wonderful coffee table (or possibly whisky bar) hardcover compilation of black and white photographs entitled An Iconography Of Chance (99 Photographs Of The Evanescent South). 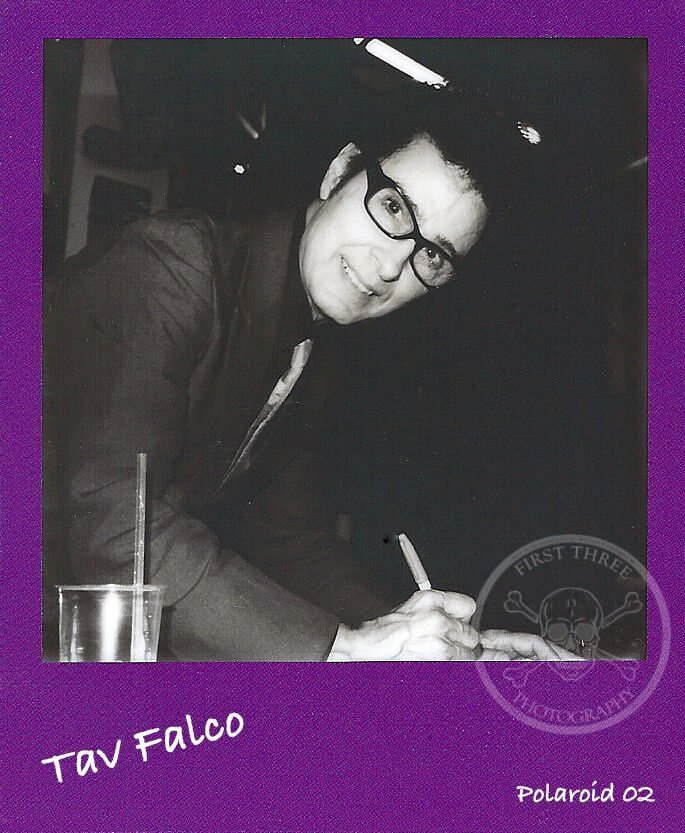 If all attending were expecting a short introduction, a hard sell and a thank you very much then they’d be very much mistaken. Wham bam thank you ma’am is not Falco’s bag, just ask the ladies. Tav doesn’t do things by half; he will not accept mediocrity nor skimp on presentation. Tav has balls by the bucketload and is never ashamed to get them out and put them behind a project, much like the gentleman airing his cock in the flash photograph three quarters way through the book.

We found Mr Falco pre-presentation, white wine in hand (just one ice cube) resplendent in a crimson jacket, black and white brogues and heavy-rimmed spectacles befitting his surrounding. He’s a cool cat; he can blend, but make no mistake, he will always shine.

We have never known Tav to be without Brylcreem or indeed a comb, a little like the Fonz, but he immediately asked us for a pocket mirror. The thought his quiff may have flopped in the humidity was pretty horrifying and had to be immediately checked. He strutted to the men’s room to reassure himself, but needn’t have worried.

Tav Falco is like the werewolf of London, his hair was perfect.

What draws us in to Tav Falco’s photographic images? Falco mentions Eggleston and Henri-Cartier Bresson as sources of inspiration and you can see flashes of that for sure in his work. There is also an overriding naivety and Falco himself admits to knowing very little about the art of photography when these images were made. He has been quoted as going down the road of ‘doing’ rather than studying.

We all crave the simplicity of childhood and I for one have that yearning to cut out the accumulated knowledge and return to that wonderful act of pointing and shooting instead of over analysing every frame and every shadow. They say a little knowledge is a dangerous thing, but too much can often just kill the moment.

It is perhaps the shadows that pull us close to Falco’s imagery; this is the world he inhabits after all. We see The Cramps at a diner, all visible but Lux himself. At first we wish Interior’s face would push through the darkness, that the artist had directed him to move forward, but then we realise that’s where it belongs, just at it is, un-posed and untouched. 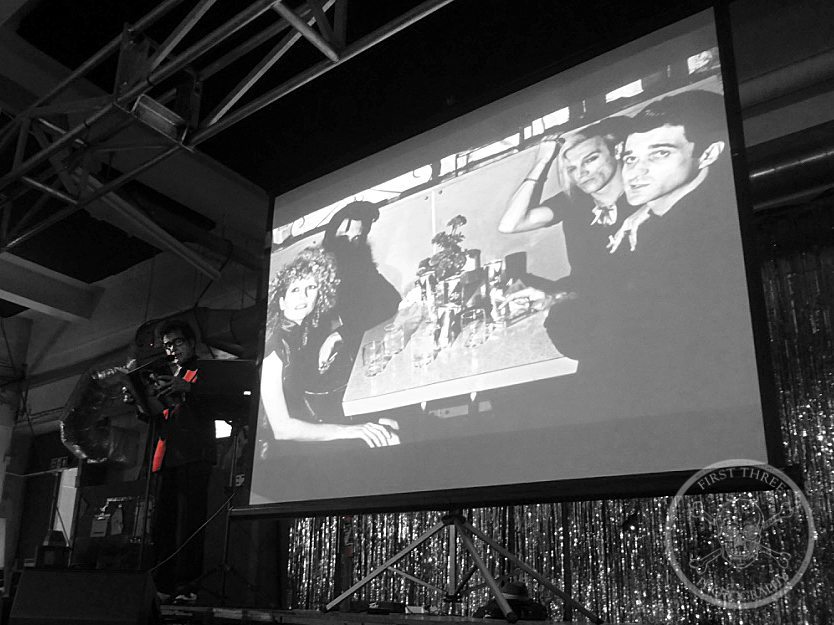 The joy of the afternoon was Falco’s narration. Every image was projected on screen and every caption was delivered with that slow southern style, bringing each image to life, giving us a glimpse of what Falco sees and how he sees it. William Faulkner once said “The aim of every artist is to arrest motion, which is life, by artificial means and hold it fixed so that a hundred years later, when a stranger looks at it, it moves again since it is life”.

As Falco pours out his narrative like fine Tennessee whisky, his images move again. The Arbus-esque boy begins to twirl his baton, Lux Interior puts that Joey Heatherton 45 on the turntable and the author’s mother turns her film star good looks toward him and kisses him gently on the cheek like only a mother can. 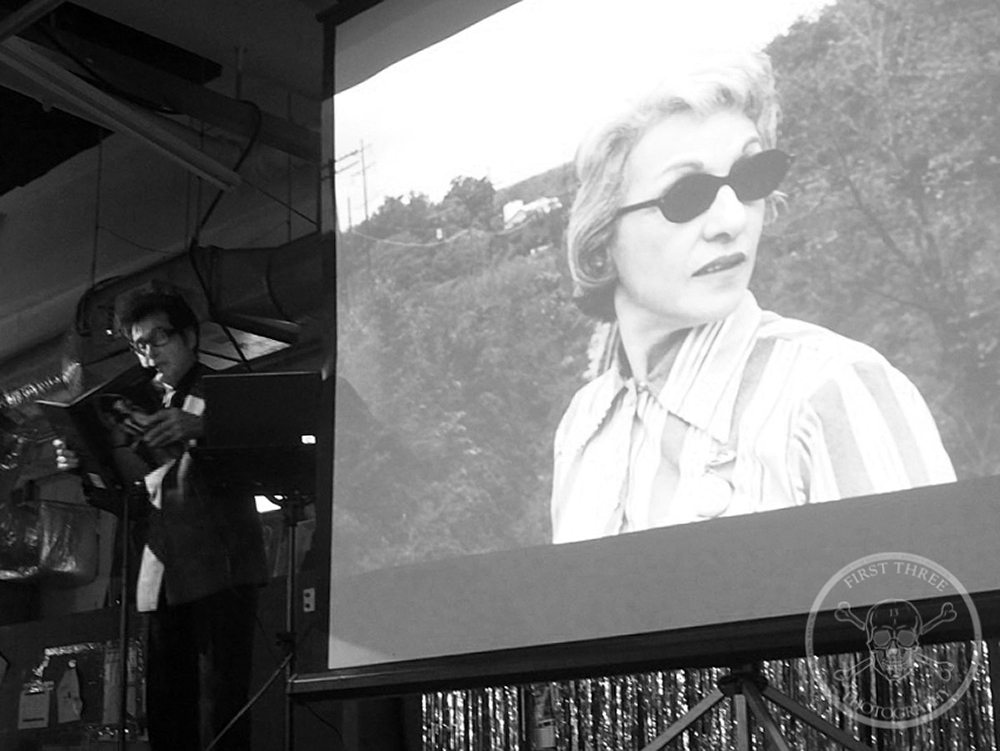 About Carl Byron Batson 308 Articles
Photographer, published poet, former party animal, body builder, grave robber to the stars and renowned chainsaw juggler, Carl can often be spotted on his Harley Davidson pretending to be in Terminator 2. He is also frequently seen in the press pits of old London town, camera in hand, avoiding being hit by bottles of wee and crippling his opposition with secret Kung Fu moves.
Website