Taiwanese pottery shards dating from the Tapenkeng culture of 10,000 years b.c. constitute the earliest evidence that cannabis has been used by humans in one way or another for quite some time. In that case, the connection comes from hemp cords used as decoration on ceramics found buried at an archeological site. The plant is mentioned in literature for the first time in the Chinese agricultural thesis XaXiao Zheng, written around 1500 years b.c., specifically for its rope and paper-making qualities. 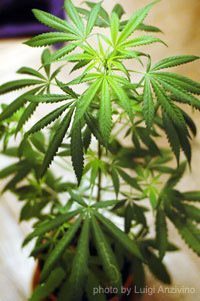 It's not until about a century b.c. that the psychoactive properties of the mystic weed are recorded (in the, Chinese once again, Pen Ts'Ao Ching), but the information recorded therein is considered to have been collected at least three thousand years previously. Point is, humans have been using cannabis for a long, long time. Nevertheless, exactly how the plant developed its ability to turn users into anything from 'bestial demoniacs, filled with a mad lust to kill' (Universal News Service, 1936) to blissed-out jazz musicians who 'dreamed of a reefer five feet long' (Fats Waller – 'The Reefer Song'), hasn't been fully understood until now. Finally though, researchers in Genome Biology have cracked the weed's genetic makeup:

From BioMed Central:
A team of researchers led by Drs Jon Page and Tim Hughes from Canada sequenced DNA from the potent Purple Kush (PK) marijuana strain, which is widely used for medicinal purposes. The PK genome and transcriptome (genes that are switched on) were then compared to those of 'Finola' hemp, and scanned for differences which might explain why marijuana produces tetrahydrocannabinolic acid (THCA), the active ingredient of cannabis, while hemp strains lack THCA but contain the non-psychoactive cannabinoid, cannabidiolic acid (CBDA).

Dr Page explained, "The transcriptome analysis showed that the THCA synthase gene, an essential enzyme in THCA production, is turned on in marijuana, but switched off in hemp." Dr Hughes continued, "Detailed analysis of the two genomes suggests that domestication, cultivation, and breeding of marijuana strains has caused the loss of the enzyme (CBDA synthase) which would otherwise compete for the metabolites used as starting material in THCA production."

Dr Page added, "Plants continue to be a major source of medicines, both as herbal drugs and as pharmaceutical compounds. Although more than twenty plant genomes have been published, ranging from major food crops such as rice and corn, to laboratory models like Arabidopsis, this is the first genome of a medicinal plant. Decoding the cannabis genome will help answer basic questions about the biology of Cannabis sativa and further the development of its myriad applications including strains for pharmaceutical production, and hemp plants with improved productivity and fatty acid profiles."

BioMed Central (http://www.biomedcentral.com/) is an STM (Science, Technology and Medicine) publisher which has pioneered the open access publishing model. All peer-reviewed research articles published by BioMed Central are made immediately and freely accessible online, and are licensed to allow redistribution and reuse. BioMed Central is part of Springer Science+Business Media, a leading global publisher in the STM sector.