How do I look: Robert Mapplethorpe? 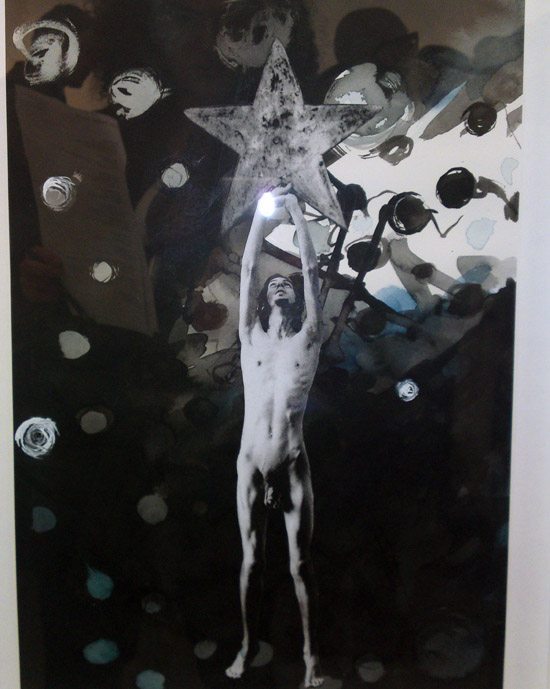 ‘Curated by Scissor Sisters’. Need the gay fashion pack know more? Berners St at 6.30 pm last Tuesday was overrun by hoards of the beautiful in monochrome, running between the two galley spaces and ‘nonchalantly’ looking around in case a Scissor Sister popped out from behind a plinth. The scene resembled Night of the Living Dead if you replace the ugly undead with perfectly groomed zombies clad in Jil Sander harem trousers and clutching Mulberry holdalls.

Inside, and the over produced crowd was matched by the over-produced art. Robert Mapplethorpe’s work however, thrives in such company. The two galleries were filled with his prints depicting gloriously muscular male forms in black and white, peppered occasionally by the saturated pinks and blues of his ‘Flower’ series. There appeared to be a kind of rhythm to the curation, a kind of black-white-black-white-colour-repeat system around the walls that viewers followed in a kind of propelled daze. The compulsion to follow the path came not necessarily from the promise of seeing something hugely different, as was often not the case, but rather the promise of seeing one’s image yet again on a in a slightly different, and perhaps more suited and more flattering work. Mirror Mirror on the Wall
This was an exhibition of reflections. Image after image of perfect bodies induced a kind of anxious self-awareness, which was aided by the fact that almost every piece functioned as a mirror, whether literally incorporating mirrors or possessing a highly reflective surface. So, in effect, everyone moved from piece to piece relentlessly checking themselves out in comparison to the bodies depicted, others around them or their own image as seen on the surface of the piece before.

Some of Mapplethorpe’s pieces did however manage to keep the viewer out. These anomalies therefore felt like more personal expressions of the doomed artist’s own self-image (he died of AIDS-related illness in 1989). Works such as Self Portrait, 1978, show the artist experimenting with the composed grotesque (here with a long black leather ‘tail’ protruding from the anus). These pieces keep the stylistic, fashion-shoot aesthetic of the others, but in depicting difficult subjects provide a respite from endless self-scrutiny for the viewer, as if the artist is re-claiming the work as his own.

Unwelcome Addition
Had the exhibition contained only Mapplethorpe’s work and the accompanying glossy crowd I would have been happy with the balance and the effect created by the relationship between the two. However, the exhibition also featured many works by artists who have been ‘inspired’ by

Mapplethorpe, as Scissor Sisters themselves were (using 7 of his images in their recent album art work and campaigns). For, me, rather than adding to our understanding of the importance of Mapplethorpe or complimenting his work, often these served to interrupt the path from piece to piece, to draw back from his world of the ideal into one of flaws and colourful complexity.

In the main gallery Mark Swanson’s Untitled (Vertical Shirt and Chains Box), 2009, was a distractingly unwelcome jumble of distressed mustard fabric and scattered chains. Matthew Barney’s  DE LAMA LAMINA: A Ruiz da Lamina, 2004, with its part-vegetable contorted figure had far too much of the organic and the monstrous to fit with Mapplethorpe’s calculated composure.

In the second space the ‘other’ works felt better chosen in line with the theme. Gillian Wearing’s Me as Robert Mapplethorpe , 2009, was a huge black space that many viewers could inhabit along with Mapplethorpe’s austere image in the corner. Scott Treleaven’s Untitled ( Silverstar), 2008, revived the obsession with monochrome and the ideal form, albeit in a fantastical setting rather than a sober and minimalist one.  Banks Violette’s photographer’s-bulb-and-chrome-sign work Not Yet Titled (The End Edition) provided a sculptural centrepiece for the works around it.

The Beautiful People
Thus, as one headed back onto the street thronged with beautiful figures posing in the lamplight, a feeling of what could have been followed. The exhibition could have stood on Mapplethorpe’s compositions alone and would have been the better for it. Perhaps the Scissor Sisters felt a need to display knowledge of recent contemporary art, or were perhaps attempting to stay away from the patterned, monochromatic feel that the exhibition could have had, seeing it as a negative rather than the positive and systematically coherent experience it could have been. Never mind, the hall of mirrors serve d its purpose and the crowd retreated in the safe knowledge that at no point would their perfectly groomed image have slipped without their realisation. Surely, for some, a dream come true.

Previous Story:
RadioSeed – There Has To Be More