A phrase that, with every passing year, becomes closer to shorthand for some inglorious fusion of ‘greedy, unconscionable, irresponsible, moronic, blinkered, murderous….’ It goes on.

So they’ve introduced an “ultrafast machine ecology” into the global monetary operating system? Maybe not the best of ideas, hmm?

Whilst the Governator heads back in time to sort it all out, Trebuchet suggests a course in woodcraft and barter.

Recently, the global financial market experienced a series of computer glitches that abruptly brought operations to a halt. One reason for these “flash freezes” may be the sudden emergence of mobs of ultrafast robots, which trade on the global markets and operate at speeds beyond human capability, thus overwhelming the system. The appearance of this “ultrafast machine ecology” is documented in a new study published on September 11 in Nature Scientific Reports. 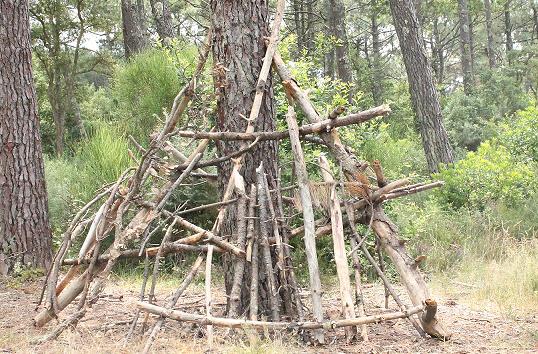 The findings suggest that for time scales less than one second, the financial world makes a sudden transition into a cyber jungle inhabited by packs of aggressive trading algorithms. “These algorithms can operate so fast that humans are unable to participate in real time, and instead, an ultrafast ecology of robots rises up to take control,” explains Neil Johnson, professor of physics in the College of Arts and Sciences at the University of Miami (UM), and corresponding author of the study.

“Our findings show that, in this new world of ultrafast robot algorithms, the behavior of the market undergoes a fundamental and abrupt transition to another world where conventional market theories no longer apply,” Johnson says.

Society’s push for faster systems that outpace competitors has led to the development of algorithms capable of operating faster than the response time for humans. For instance, the quickest a person can react to potential danger is approximately one second. Even a chess grandmaster takes around 650 milliseconds to realize that he is in trouble – yet microchips for trading can operate in a fraction of a millisecond (1 millisecond is 0.001 second).

In the study, the researchers assembled and analyzed a high-throughput millisecond-resolution price stream of multiple stocks and exchanges. From January, 2006, through February, 2011, they found 18,520 extreme events lasting less than 1.5 seconds, including both crashes and spikes.

The team realized that as the duration of these ultrafast extreme events fell below human response times, the number of crashes and spikes increased dramatically. They created a model to understand the behavior and concluded that the events were the product of ultrafast computer trading and not attributable to other factors, such as regulations or mistaken trades. Johnson, who is head of the inter-disciplinary research group on complexity at UM, compares the situation to an ecological environment.

“As long as you have the normal combination of prey and predators, everything is in balance, but if you introduce predators that are too fast, they create extreme events,” Johnson says. “What we see with the new ultrafast computer algorithms is predatory trading. In this case, the predator acts before the prey even knows it’s there.”

Johnson explains that in order to regulate these ultrafast computer algorithms, we need to understand their collective behavior. This is a daunting task, but is made easier by the fact that the algorithms that operate below human response times are relatively simple, because simplicity allows faster processing.

“There are relatively few things that an ultrafast algorithm will do,” Johnson says. “This means that they are more likely to start adopting the same behavior, and hence form a cyber crowd or cyber mob which attacks a certain part of the market. This is what gives rise to the extreme events that we observe,” he says. “Our math model is able to capture this collective behavior by modeling how these cyber mobs behave”.

In fact, Johnson believes this new understanding of cyber-mobs may have other important applications outside of finance, such as dealing with cyber-attacks and cyber-warfare.