Well at least it shows that people in hotels wash their hands after using the toilet. It comes as something of a surprise that in a study on microbial levels in hotel rooms, that bathroom door handles recorded low bacteria levels.

Although how they manage to get so much fecal matter on the TV remote is a bit of a mystery. Come up with your own mental picture for that, we're too busy trying to erase ours. Perhaps it's time to update that famous old Chinese proverb to 'Man who watch TV with itchy backside end up with smelly remote'.

The obvious answer is that the tv remote controls get cleaned less often, but judging by the study's further findings – that it's actually the cleaning staff that are transporting most of the bacteria around the premises – perhaps not.

An experiment of surfaces in hotel rooms finds television remotes to be among the most heavily contaminated with bacteria.

"Hoteliers have an obligation to provide their guests with a safe and secure environment. Currently, housekeeping practices vary across brands and properties with little or no standardization industry wide. The current validation method for hotel room cleanliness is a visual assessment, which has been shown to be ineffective in measuring levels of sanitation," says Katie Kirsch an undergraduate student at the University of Houston who presented the study.

The study was designed as the first step in applying the Hazard Analysis and Critical Control Points (HACCP) system to hotel room cleanliness. Originally developed by the National Aeronautics and Space Administration, HACCP is a systematic preventive approach that identifies potential physical, chemical and biological hazards and designs measurements to reduce these risks to safe levels.

While some of the most contaminated samples, including the toilet and the bathroom sink, were to be expected, they also found high levels of bacterial contamination on the TV remote and the bedside lamp switch.

Most concerning, some of highest levels of contamination were found in items from the housekeepers' carts, including sponges and mops which pose a risk for cross-contamination of rooms. Surfaces with the lowest contamination included the headboard on the bed, curtain rods and the bathroom door handle. 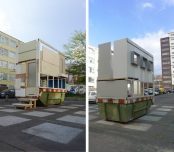