For the Love of Carmine (Lena Moross)

Carmine was publicly enacting his pathos with a grace and self-possession that captivated Moross, to the point where the artist resolved to capture the individual and his enactment as a work – or many works – of art. Moross’ style, with its animated line and vivid color, already finds heightened drama in the everyday; faced with a person whose very presence tells numerous stories, the painter set about depicting Carmine in various circumstances, staged and natural (although in Carmine’s case, a staged portrait is as natural as anything).

Moross’ depictions of Carmine comprise an unusual body of work within her oeuvre. She has worked in series before, and her vivid, highly graphic style might lend itself easily to serialization. On the other hand, by working so unusually – painting with watercolor across physical expanses as broad as those normally commanded by oils or acrylics – Moross encourages herself and her audience both to lose themselves in the picture, in its lusciousness and its delicacy, its movement and its poignancy. 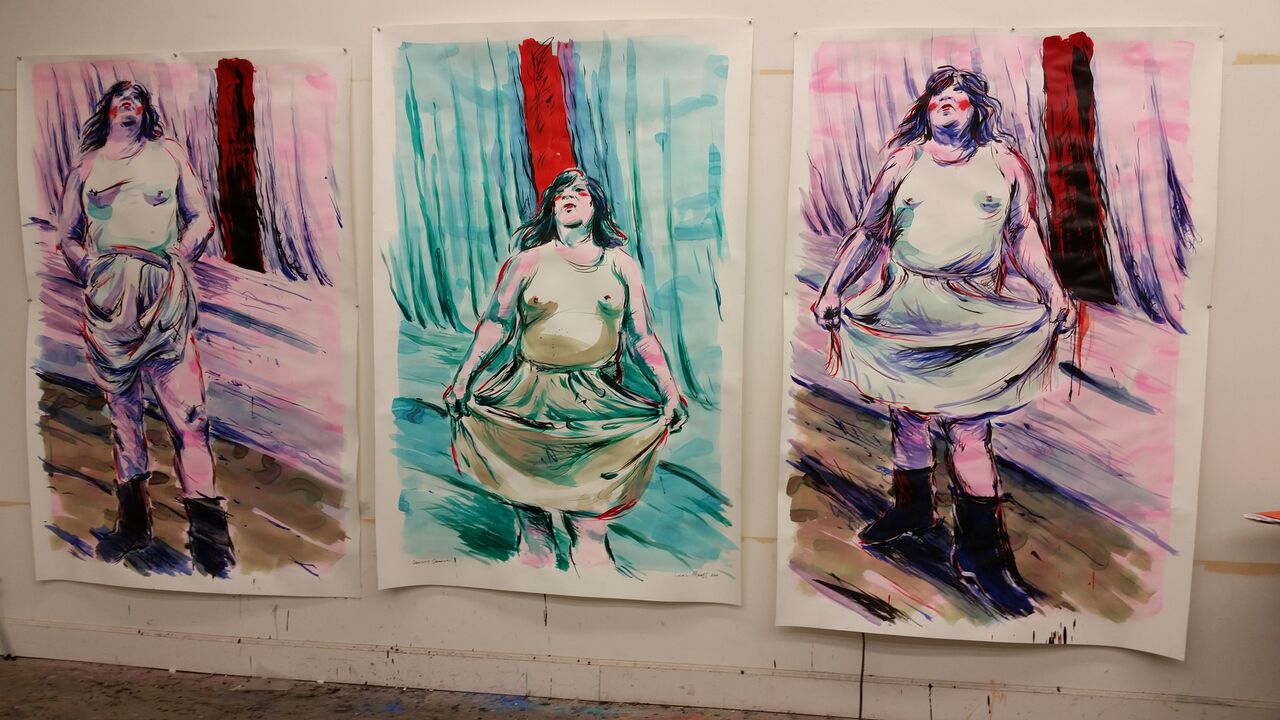 The striking originality of Moross’ approach draws attention to itself even while illumining the scenic drama of a cityscape or the choreography of humans doing daily tasks. With the works in the Love of Carmine series, however, Moross has put her skills and her vision at the service of their subject rather than the other way around. Moross is not just painting Carmine, she is painting about Carmine.

To a great extent, it is the vivacity of Carmine himself that steers the way she paints him. Being who he is – a person of mixed gender who long ago accepted the ambiguity of his inner situation and has since manifested it outwardly as needed – he lives a kind of theatre at the same time as he demonstrates personal contentment with his identity. Carmine’s is a compelling story, and it has a happy ending, making him a choice subject for a painter whose own style is filled with sunny colors and stark contrasts. 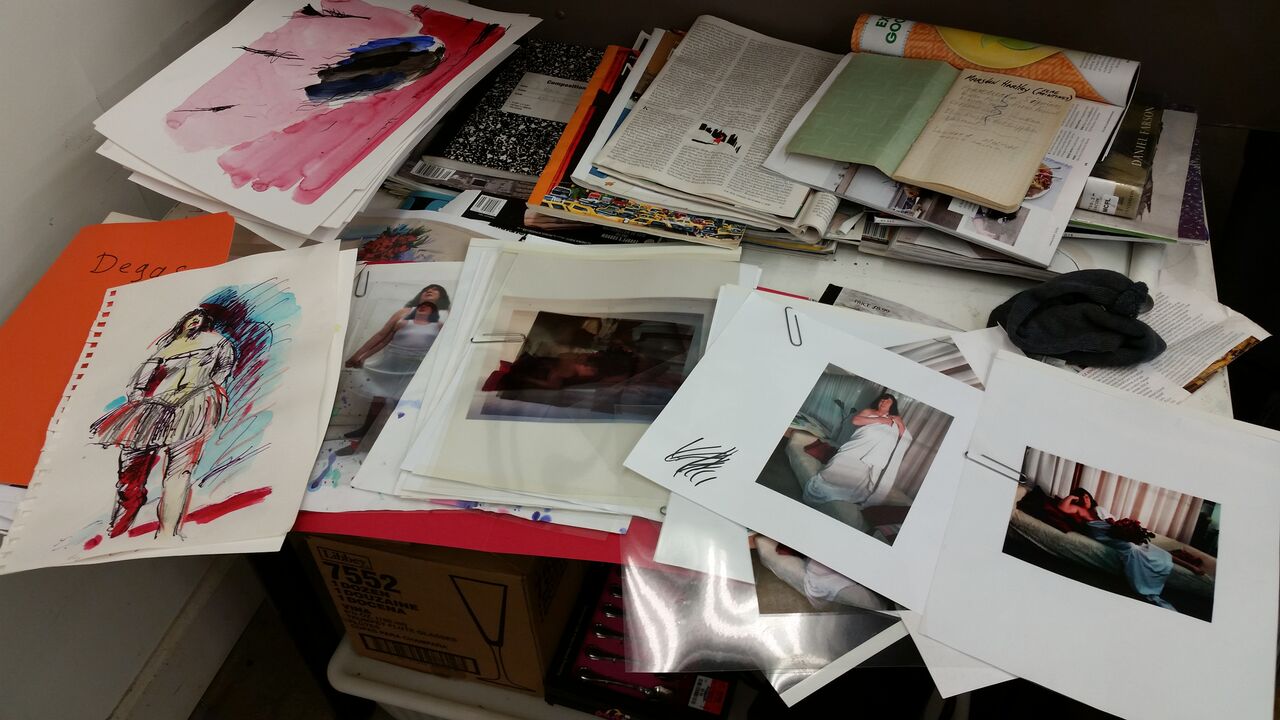 Moross thus treats Carmine as a kind of Buddha, a self-realized being whose peace seems at once hard won and casually worn. This is no more a political or social or psychological statement on the artist’s part than it is on the subject’s; in fact, the kinship they feel is that of individuals doing what they have to do and letting others worry about any perceived contradictions or dissonances. Can Carmine – and the numerous portraits Moross has painted of him – be held up as a role model for those coming to terms with their own intergender natures? Perhaps; but the role he models is one of dynamic, perhaps dramatic, equilibrium, a message not of militancy, but of mediation and, as Moross would have it, illumination.

Arguably, Lena Moross’ manner of painting is as syncretic – and, thus, idiosyncratic – as Carmine Messina’s lifestyle is. Certainly both are models of joyousness and are markedly free of confusion. The relationship they now maintain is based on mutual admiration, not exploitation, and their interaction yields the kind of empathetic energy that challenges notions of “otherness” by transcending them. 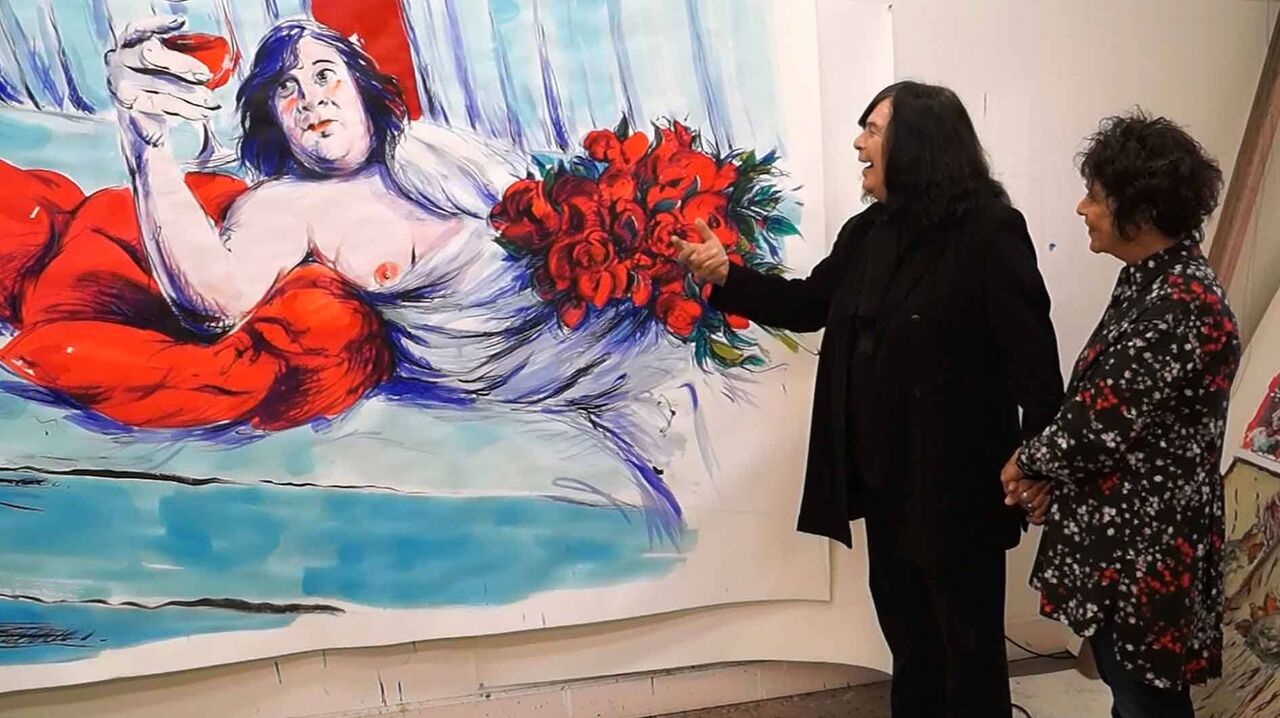 Moross may cultivate Carmine’s exotic aura in her portrayals; lord knows, she hasn’t gravitated to him because he’s boring. But that very sense of style, notable but not flamboyant, suits hers to a T. Moross’ paintings celebrate Carmine’s humanity; and his comfort in his skin reflects the offhand virtuosity of her painting.

This is a match made on earth.