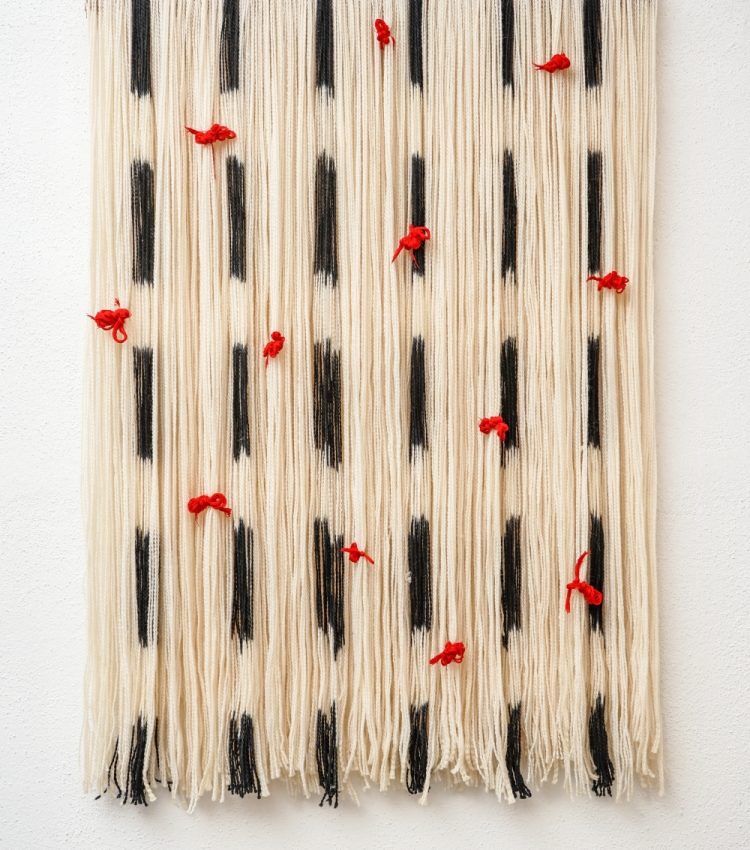 This group show brings together a collection of artists who play with the imaginary and the unconscious. Liminal works that tease the edges of material, in some cases as per Arte Povera, in other places using the familiar as narrative tropes, tied and untied to meaning, our shared history and what darkness we bring from half recognised parts of our self.
Exhibition Notes: 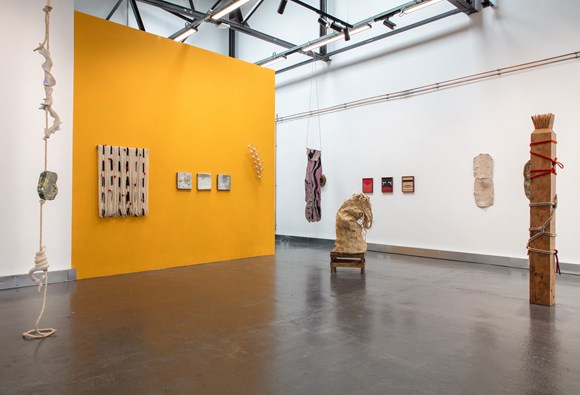 The title is in reference to a homonymous tale in Jorge Luis Borges’ The Aleph (1949) which follows a man who accidentally obtained immortality – then struggles to lose it, as he lives through the centuries. The artists featured in The Immortal focus on vernacular techniques and the non-written information generations choose to retain to pass on to the next. Contemporary conflicts as well as the pandemic have brought to the public conscience the importance of identifying both how we consume and create and the fundamental significance of being able to take agency of various aspects of life, such as agriculture, art and craft.

All the six artists on show come from different parts of the Americas and Europe. Some of them live and work in their native countries, whilst others have chosen to reside in a country which is not their birthplace. However, the shared value they place on craft techniques link their practices.

Caroline Achaintre’s work, Primitivist in style, draws on traditions of carnival and tribal masks and the act of being both attracted to and repulsed by an object. German Expressionism and post-war British sculpture also influence her practice as these movements convey the trauma of a war-time generation. These artistic movements inspire Achaintre as they act like intersections between the ancient and the contemporary and the psychological and the physical. The artist likens her work to anthropological museum displays, where objects from another place in time are presented in a contemporary context.

Lorena Ancona explores the ethnological qualities of materials as well their significance in creating memories. Ancona works mostly with fabrics and ceramics and uses dyes, pigments and natural materials. The artist examines the intangible: lost traditions, ancestry and identities.

Tonico Lemos Auad investigates the personal and cultural significance that everyday objects hold. Auad’s practice employs traditional techniques including embroidery, woodcarving and stonemasonry which serve as a reminder to the viewer of the skills of humankind. His sculptures act as a tool for ideas exploring faith, acts of repair and resistance.

Dan Coopey’s practice also elevates the significance of everyday objects. The ancestral act of basketry in Coopey’s work explores the organic quality of materials as well as how objects from the past hold an eternal link with previous generations. The question of permanence is central to Coopey’s work.

Marta Jakobovits’ ceramic works constantly question the formative potential of materials, texture, colour and the energies they possess. The artist’s works connote feelings towards the future, present, history, and ancient times. Having lived under one of the most brutal and repressive dictators in history, the Romanian Nicolae Ceaușescu (‘The King of Communism’), the Jakobovits family, whose heritage is a mix of Armenian and Hungarian, lived on the border between Hungary and Romania, in the town of Oradea. A sense of displacement and adapting to new surroundings was an early influence on Jakobovits’ practice. At the time of Nicolae Ceaușescu’s regime Marta’s practice became a form of release from the oppressive forces around her. Along with her late husband, the renowned painter Miklós Jakobovits, Marta became part of the inner circle of the important Transylvanian artists who were vigilantly creating art as an act of resistance against the dictator and a regime which did not allow for such freedoms.

Antonio Pichillá focuses on the ever-developing connections between western contemporary art and the vernacular tradition of craft. Using natural materials Pichillá draws from Mayan epistemology to: “…restlessly look for a bond that integrate(s) with the environment as something inexact, uncodified. I struggle to give form to transitory states,” as he explains. Examining the ancient culture of his native Tz’utujil heritage and the postcolonial notion of a homogenous national identity, Pichillá’s works are an act of resistance to otherness and binary constructions of identity. Instead, his work celebrates the heterogeneity of everyday contemporary Tz’utujil life. From his studio at Lake Atitlán the artist’s practice is driven by anthropological research into Guatemala’s urban and rural regions.