A small piece of freshly cut sapwood can filter out more than 99 percent of the bacteria E. coli from water 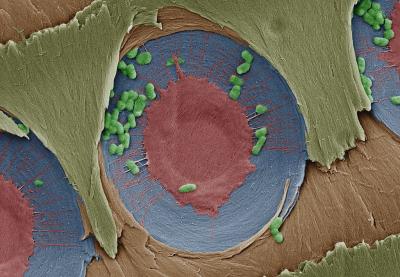 A small piece of freshly cut sapwood can filter out more than 99 percent of the bacteria E. coli from water, according to a paper published by Michael Boutilier and Jongho Lee and colleagues from MIT.

Researchers were interested in studying low-cost and easy-to-make options for filtering dirty water, a major cause of human mortality in the developing world. The sapwood of pine trees contains xylem, a porous tissue that moves sap from a tree’s roots to its top through a system of vessels and pores.

To investigate sapwood’s water-filtering potential, researchers collected white pine branches, stripped the outer bark, and cut them into small inch-long sections. They then mounted each in plastic tubing, sealed and secured, and filtered water through that either contained small particles or E. coli bacteria.

The authors found that sapwood filtered out particles greater than 70 nanometers wide, but was unable to separate out 20-nanometer particles, suggesting that there is a particle size limit to what coniferous sapwood can filter. Sapwood also filtered out more than 99% of E. coli from water, which mostly accumulated in the first few millimeters of the wood in what are known as pit membranes.

Up to four liters of clean drinking water a day

The small- branch filtration system produced water at rates up to four liters of clean drinking water a day, typically enough for one person. However, the authors caution that only hydrated sapwood (and not dried-out wood) will filter out contaminants.

“There’s huge variation between plants,” says Rohit Karnik, senior author on the paper. “There could be much better plants out there that are suitable for this process. Ideally, a filter would be a thin slice of wood you could use for a few days, then throw it away, and replace at almost no cost. It’s orders of magnitude cheaper than the high-end membranes (currently) on the market today.”