First exhibited at L.A. Artcore Brewery Annex, the full-scale installation assumes the appearance of a common terrain: the family living room. Green floral wallpaper sheathes the walls. A botanic area rug covers the floor. And, on a small sofa, two figures sit. The couple are fixated on a television set where black and white footage of an old wallpapering tutorial runs on a loop. 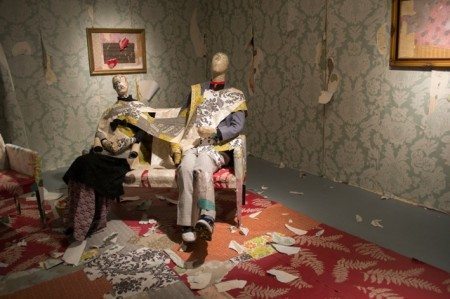 Upon entering the installation, viewers are immediately drawn to the television with its cloying audio, detailing the simple steps required to refresh one’s wall coverings. It is at this point that the installation’s remaining constituents invoke curiosity. With exception to the television’s screen and the gallery’s ceiling, everything in the room is swathed in wallpaper, including the couple on the couch.

A walk around the room discloses curious details. Of particular note is the wallpaper’s thickness. Decorative panels from different eras are layered upon one another, suggesting a history of occupants spanning several decades. While wallpaper has long been used as a metaphor for suppression, Dodge’s inventive play upon this interpretation is what instigates action among those who enter the space.

By luring her audience in to tug at the papers’ corners, she encourages all to purge their fears by writing them down onto small scraps of peeled paper, which she collects and burns in a symbolic exorcism at the show’s closing. 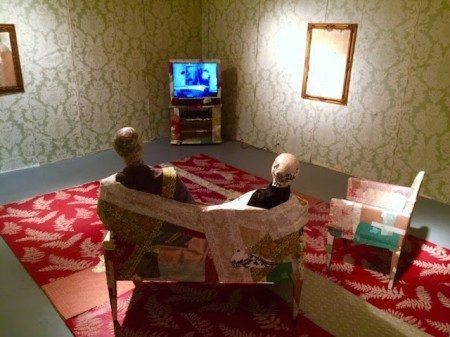 On a global level, the installation delves deeper. When viewers glance back at the television, they discover an unexpected clip. A collapsing structure followed by a bursting mushroom cloud flashes across the screen.  The reference to the atomic bombings of Hiroshima and Nagasaki is inescapable, as are the threats of the Cold War for more than four decades.

Once the soothing narrative of the wallpapering loop resumes, viewers are left to reflect on the nature of modern warfare and the ways we’ve responded when faced with conflict.

Dodge states that the installation was prompted by the events following the Charlie Hebdo massacre. France’s militant response calling for measures to redouble electronic surveillance felt all too familiar to Dodge. She knew from experience, as a war correspondent in a country where the U.S. hastily waged war after 9/11, that France’s proposition was nothing more than a knee-jerk reaction based in fear, and that an infringement upon civil liberties would only exasperate tensions and fuel xenophobia as did the U.S. Patriot Act in 2001.

Today we live in a world that has too readily become accustomed to acts of terrorism. The Paris attacks along with recent shootings in San Bernardino are only two of the many stealth and violent attacks that have reignited our fears and sense of vulnerability in even the intimacy of the home space. With Peeled & Raw, Dodge attempts to address this pertinent issue by offering a commentary along with a simple, albeit profound, process to exculpate our growing fears of intrusion as we attempt to navigate our new reality.

Next Story:
Come to the Dark Side with Turnable Windows