Sometimes, picking an album to listen to and write about is like playing Russian roulette.

Whilst you want that empty chamber after you pull the trigger… sometimes, you unfortunately hit the chamber with the bullet in. Birushanah are a three piece ‘Experimental Doom and Post Hardcore’ band from Japan who consist of a guitarist-vocalist and two percussionists. One of the percussionists uses traditional drums and the like, whilst the other plays what is best referred to as ‘Trash’ – metal based objects struck to create a rhythmic pattern much like a drummer might.

The Japanese metal scene known to all but the most dedicated of western listeners can be condensed into the following: the infectiously catchy J-Pop meets metalcore stylings of Babymetal; serial killer-worshipping heavy doom outfit Church Of Misery; experimental and atmospheric black metallers Sigh, and the wildly diverse (and sometimes rather patchy) Dir En Grey.

Given how Doom is growing in popularity in recent years, especially with the likes of Roadburn Festival putting on sensational shows and the retro-sound of 70’s classic, hard rock and blues being incorporated into lots of stoner rock, I thought maybe Experimental Doom with Post Hardcore leanings might be worth a shot. 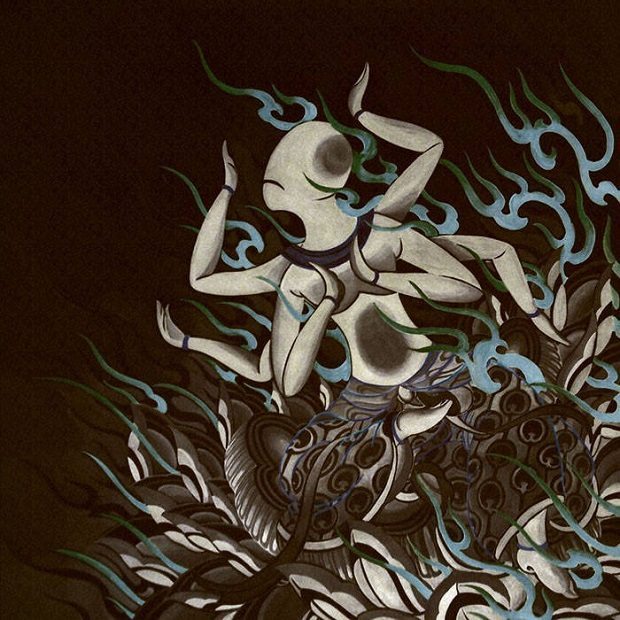 Initially, the experimental journey from this unique three piece starts off rather well. “薔薇” [Barasayomoto] opens the album and it’s an epic 10 minute-plus track. Given the experimental nature of the band, the long length comes as no surprise (as often these types of bands will utilise as much time as possible to create a vast, sprawling sonic landscape to try and get you drawn into exploring it). The first four minutes are wonderful. The traditional styled Japanese music approach with the wind instruments, subtle guitars and booming percussion paints a vivid picture in your mind and wills you to indulge. As you go deeper, the music distorts, becomes more ominous, and you get the feeling something big is going to come down. Sadly it doesn’t quite.

The trash percussion rears its head here and it is a major annoyance and distraction. The harsh, hollow clanking quickly becomes a major irritation and monotonous annoyance. Sure, the raw droning guitar riffs and thunderous drums soon kick in, and the clean vocals have a very theatrical edge to them, but it is near impossible to get past the metallic noises.

“車輪” [Sharin] follows on with the heavy approach where the previous track left off. With a raw intro, harsh guitar and groove from the drums it does seem promising, but again, the irritating clanking metallic percussion proves a massive distraction. With seemingly no sense of direction to the garbled chaotic mess of metallic clattering, the track proceeds forwards with an approach  you could liken to the ‘throw it at the wall and see what sticks’ approach. Some parts (when you can get past, or filter out, the noise) do seem to have something loosely resembling a sense of structure but for the majority, it is disjointed and awkwardly delivered.

Maybe in Japan, this form of music is classed as contemporary or accepted, but for a band on their fourth studio album, it is something I would really expect them to have worked their way past by now!

“星々の名残り” [Hoshiboshi No Nagori] is the third track of this album and again, it starts off rather aggressively with that jarring metallic awkwardness. Behind it, trying to break out and get recognition, is a real tension building, booming drum pattern with a strange hybrid of war-drum and tribal sounds. The guitars drone out in the background to the point of almost feeding back on themselves, but whilst this ominous build up may work in the traditional sense of doom, the trash section just ruins the atmospheric effect the band are going for.

There are some moments of solid direction and clarity in terms of composition and progression but the chaotic overlay of atonal percussive attacks just causes it to get lost and pushed to one side. When there are vocal moments in the track, they are delivered with a touch of drama behind them, giving them an almost theatrical edge (which does augment some of the dramatic dissonance of the doominess behind them) but when all these elements combine, along with the metallic mess, it is not an enjoyable experience.

“瞼色の旅” [Mabutairo No Tabibito] is very similar to the previous track with the prominence of the trash percussion being extremely noticeable. However, this is the shortest track of the release so you may think there might be more chance of progressions and structure. There are some elements of these present, most notable are some small melodic moments, but these have little flow between them and when the track delves into the angular, shifting rhythmic tendencies of Djent it brings a shudder – if the novel percussive elements weren’t bad enough, the monotonous djent approach just makes it all the worse!

Finally coming to the end of this experience, “鏡” [Kagami] is the album closer. Trying my best to ignore the metallic percussive noise, which is just a plain irritation by this point, we strive on. As the track progresses there are some interesting musical progressions from the guitars, most notably an intricate freetime lead section with an atmospheric quality eventually leading into a droning, pusling feel rhythm section. This is the best display of music from Birushanah on this release since the first four minutes of the album’s opening track! Continuing, there are some intricate riffs which surface and bring with them a slight groove-laden element, but the majority of the track is dramatically strange and seemingly entropic and nonsensical.

To look at the album from another angle, this is a three piece who are experimental by nature. Combining the harsh elements from some styles of doom with jarring (if insufferable) metallic noises, then adding some atmospheric effects and dramatic vocals, it creates an uncomfortable listening experience. Perhaps that is the whole point of the musical experiment Birushanah are trying to carry out on Makyo.

This is a very divisive album. You will either appreciate its content or loathe it. I won’t be revisiting Mayko any time in the foreseeable future.