The Black guy in the middle (Benji Webbe, Skindred)

‘Look, humour me, just try it. Do some dancehall stuff on top of the punk we do’.
Next thing you know we’re called Dub War and we’ve got a record deal. – Benji Webb

Welsh dread, Benji Webbe is backstage at Camden Rocks festival holding court on a random sofa in the sun.

His ragga-punk regalia is trashy, worn in and dead cool, much like the man himself. He’s also wrapped his knee in duct tape, apparently a tip from a mystical Chinese healer.

Amped and enjoying life, Benji is upfull and why not? – the clouds have parted, angels sing and Dub War is reforming.

“Yeah we’re going to play some selected shows. It’s the original line up. It’s me, the bassplayer, the guitarist, but unfortunately the original drummer can’t do it. He’s too old and he can’t even pick up sticks no more ‘cause of arthritis.

Trebuchet: How did it come together?

Benji: I just wanted to play a Dub War set. I’ve been playing Skindred stuff for so long, and I love Skindred, but the name Dub War won’t go away. It’s still a beautiful creature.

We rehearse once a week. I mean them guys (deep breath). Since Dub War stopped there hasn’t been a week that we haven’t hung out, drunk booze, and written songs. We’ve written a whole country album together, some Bluegrass stuff. Me and Richie the bassplayer have been writing this bluegrass stuff (which sounds amazing) for three years now. We had the double bass and started playing ‘Strike it’. I started singing it and it sounded really good.

So I knew this young drummer who was really good called Mikey, who plays in this band called the Knights, from Wales. He’s just one of those people that absorbed drums. He told me that he grew up with ‘Nah She a Ting’ and the magic was there.

For me it’s a completely a different vibe from Skindred. I mean Dub War was definitely the blueprint for Skindred (but where) Skindred is completely executed, we know what we’re doing. Dubwar didn’t know what the fuck they were doing.

Tell us about your beginnings?

For instance, some guy would say ‘Ya wan’ come sing on my sound system, I give ya two ‘undread pound and a big bag a weed’ and I’d be like ‘Shit yeah!’.
So I’d go to London, Manchester, travel all around and then at the end of the night I’d be the last one to get paid and they’d go ‘Here’s five pound and two spliffs’. So in the end I got so frustrated with going, but not going anywhere.

At that time I recorded a song with Mad Professor which charted and I was in project called Syndicate,we did a song called ‘Life in the Family’ (as John Webbee) and then I expected to get a big cheque because it was number one in the Birmingham and London Reggae charts. I went to the studio to see Mad Professor and he gave me a £40 cheque. I was like, ‘Fuck this’.

So I went back to Wales and someone said hey theres a punk band that needs a singer. I always liked the Pistols, The Clash, The Specials and all that, so I went to the rehearsal space and started singing.

I said ‘Fuck that, I don’t wanna do reggae any more’ but they kept pushing me to try it. To the extent that he was saying ‘Look, humour me, just try it. Do some dancehall stuff on top of the punk we do’.

Next thing you know we’re called Dub War and we’ve got a record deal.
For me, singing or vocals is all about rhythm and aggression and whether you’re Johnny Rotten or Capleton it’s the same thing.

Trebuchet: That said, I would love for Dub War to do Night Nurse

Bro, that would be heavy. I’m gonna talk to Richie cos I know he’d be into that. Because I can do a good Gregory Isaacs impression. (Starts singing a exaggerated nasal version of Night Nurse).

Trebuchet: He does a sort of Aaron Neville thing too.

Yeah he does, doesn’t he (continues singing, but more nasal with rapid fades)?
That would be great. A punk rock version with a really heavy drop in there. That’s it! Next rehearsal we’re going to do a cover of Night Nurse. From Monday it’s on.

Trebuchet: Everyone is looking forward to the Skindred gig tonight….

Trebuchet: You’ve had a lot of accolades for your live performances and also for your album. There are rumours of a new, currently untitled, album coming out. What can you tell us?

There’s a title, there’s a title! The album is finished, it’s mastered, we’re just getting the tour together now and once we have the tour in place we’ll drop the name. The record will be out in October.

Trebuchet: How did Benji Webbe end up coming from Wales?

My father fucked this woman from Wales. He got off this ship from the West Indies, in the Windrush days in the 40s, early 50s. My father got off the ship with his brother and they went to Manchester, and then they heard there was work in Wales. Industrial work, you know? There wasn’t any work in Manchester for them so they left for Wales, he met my mother, and Bob’s your Marley.

In Newport I’ve got two brothers and one sister and it’s funny because people think of Wales as sheep and all that. But no, man! I still live in me home town and people ask ‘Why don’t you move away?’ And I did. I lived in Florida for five years and it was really beautiful, but there’s no place like home. If you feel at home somewhere you feel at home, and I love Wales.

Wales has made me the person I am today, a culturally diverse person and all that. I mean, where I’m from you go to some places and you don’t see no niggers at all. Because I’m from the docks it’s always been mixed there, and I’m talking like from the 30s, there’s been Black families there.

There’s a passion there that I feel from being not Welsh welsh, but having that cultural diversity. It doesn’t make me feel like I’m this or I’m that, I’m just happy to be me.

Trebuchet: Ok so what happened to Dub War?

What happened was we got signed to Earache, and godbless Earache and Digby Pearson, I used to talk pure shit about them but I was all wrong. I was wrong.
I was young. And now that I look on it, the money that Earache spent on Dub War, I gotta salute them.

When we first started doing the Dub War thing we had eight or nine different record labels come down to Wales and they all sat down with us but all ended up blowing us out. It was then that Digby stepped forward and said let’s do something, and you got to respect that because when you look back at the budget he gave us to do the records and they way he took me around the world….

Because as far as I was concerned, when I was doing that reggae stuff it was good fun but I was never going to get out of Wales. I mean, I could have been the best singer in Newport, but who the fuck wants to be that?

What I’m trying to say is that it’s a big world out there and Earache records gave me the opportunity to go out there, and while I was out there…. The Bible says that a man’s gift will make way for him (Proverbs 18:16), and I’m a true believer in the man’s gift making way.

What I found was that, because I was doing this Dub War thing, people like Max Cavalera and Robert Trujillo just flocked to me, embrace me and work with me. It made other artists from around the world go ‘Fuck yeah, this cat’s got something’.… 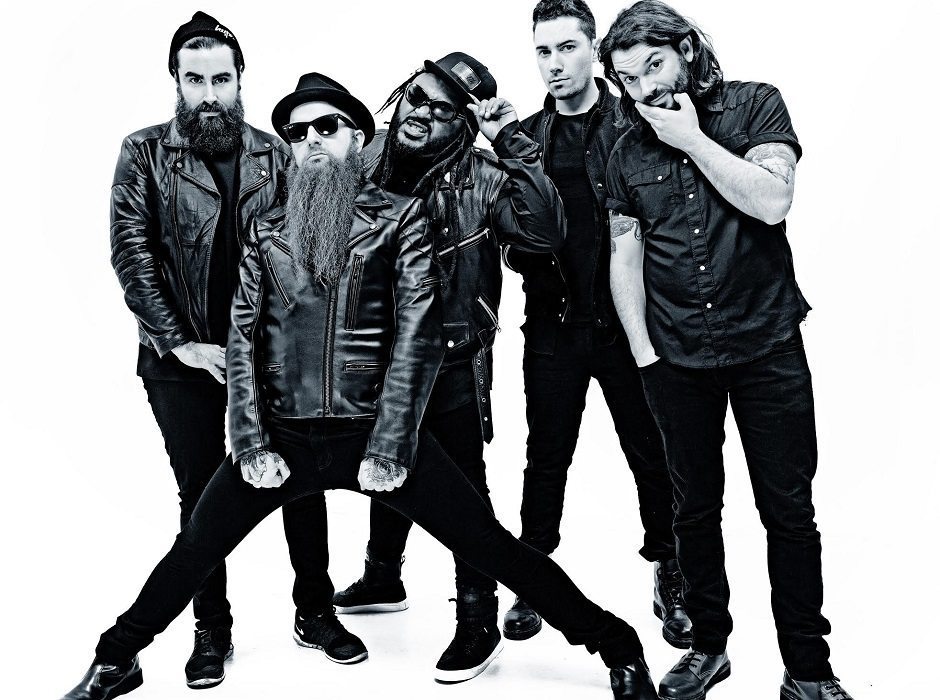 Let me tell you something. As a kid growing up, punk rock to me wasn’t Sum 41 and shit like that, it was based out of London and it was real and rough. When I was sitting in my house and someone sent me a link to the Sleaford Mods I was knocked off my fucking chair cos of the simplicity and the strength of these boys. They’re not 11 or 12, they’re men who’ve been through life already so they know what they’re talking about. So I identified with it, I really did. I don’t care about the Prodigy thing they did but the stuff they did on their own. Wow. Wow.

No problem homie. I’ll see you at Download. I’ll be the black guy in the middle.

SKINDRED are pleased to announce a full UK headline tour in November 2015. The tour will support the imminent release of ‘Volume’, their brand new studio album due out through Napalm Records on the 30th October 2015.

After a sold out Arena run with Steel Panther, a remarkable Camden Rocks performance, two sold out Hit The Deck headline slots and a host of European festival shows (including Rock Am Ring and Rock Im Park in Germany with Foo Fighters and Slipknot) already in 2015, Skindred announce a UK November headline tour with Crossfaith & Hed PE as support.

The band are currently putting finishing touches to their 6th studio album, entitled ‘Volume’, which will be the bands first release on Napalm Records. The album was recorded at The Strongroom studio in East London and was produced by longtime collaborator James ‘Lerock’ Loughrey (previously worked with the likes of White Zombie, Depeche Mode, Manic Street Preachers).

Skindred are the best live band in the UK. In 2014 the band played to audiences across the world, with a string of high profile festival slots – including Download, Hurricane, Bestival and Polish Woodstock – along with sold-out headline tours at venues such as London’s Forum. The band has sold more than half a million records worldwide during their career to date.

Next Story:
What Were the Skies Like Before Fossil Fuels?