Christmas is almost upon us, and as has become a tradition in recent years, the race is once more open to solve that most milennial of challenges.

What can you do with a 3D printer that’s in any way cheaper, faster or simpler than pre-existing molding/extrusion techniques?

Does a 3D-printed plastic musical cracker-filler break the deadlock?

A research team from Autodesk and Dartmouth College has developed a new interactive design tool called “Printone,” which provides users with the ability to create functional 3-D printed wind instruments in any shape or form using interactive sound simulation feedback. The team designed 16 free-form wind instruments to play different melodies, including: a star that can play “Twinkle, Twinkle, Little Star,” a bunny that can play “Little Peter Rabbit;” a snowman that can play “Jingle Bells;” and a dragon that can play “Puff the Magic Dragon.” The team’s research will be presented this week at the 9th ACM SIGGRAPH Conference and Exhibition on Computer Graphics and Interactive Techniques in Asia.

“With Printone, everybody can be a designer of new wind musical instruments. You can transform almost any shapes you like into instruments and play your favorite melody,” says study co-author, Nobuyuki Umetani, head of the Design and Fabrication group at Autodesk.

A wind instrument’s sound is created by the player blowing air into the instrument, which creates a vibration of air known as the acoustic resonance– the interaction between sound waves and the internal geometries of the instrument. To date, most traditional wind instruments have taken on tube-like shapes for which the resonance is well understood, as creating free-form instruments manually has long been considered a challenge.

Through Printone, users can make a wind instrument out of any shape and are able to select the target notes that they want the instrument to have. After the user inputs a three-dimensional shape into the platform, the tool creates a hollow acoustic cavity. The user then selects the area where they will blow into the instrument easily (known as “the fipple”) and chooses the position and size of finger holes. The scale of the object can also be changed to hit the target range of notes. During this process, users are guided by quick feedback from the simulation on how each edit shifts the notes produced. Alternatively, users can utilize Printone’s AutoTune feature, which produces hole sizes automatically for the target notes desired for the instrument. 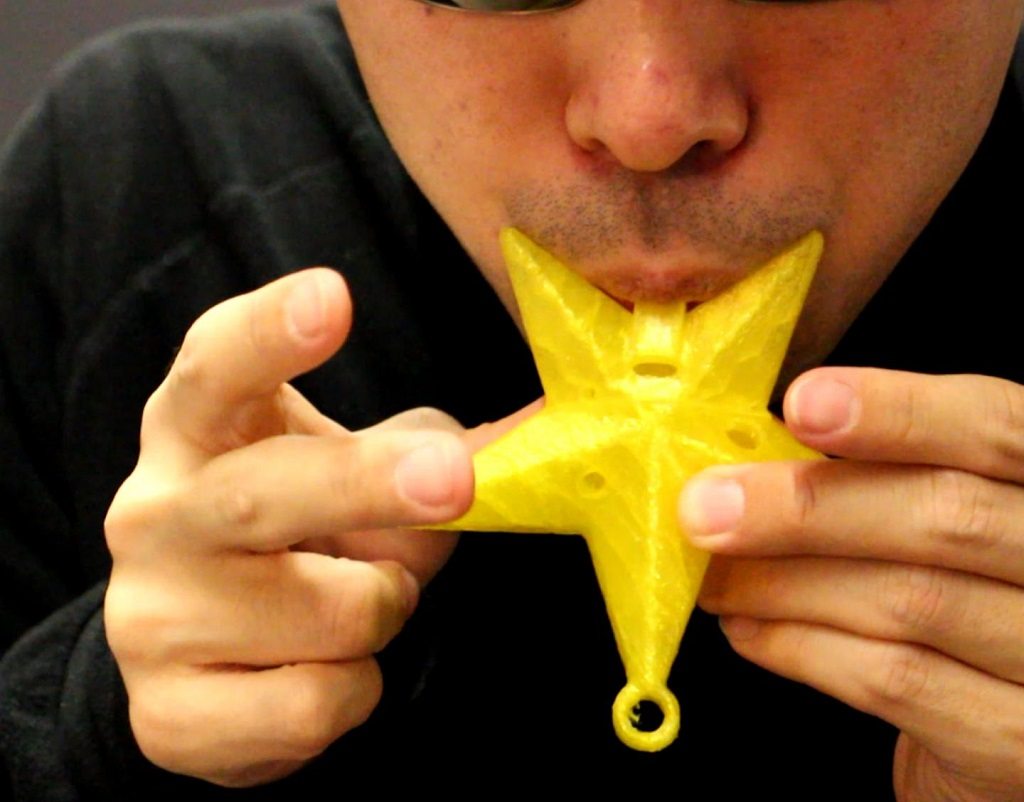 “3-D printing has opened up possibilities for personal customization in manufacturing. Our research shows how it’s possible to customize shapes not just for their appearance, but also for physical behavior like acoustics. We’re also excited about the creative opportunities to design an instrument for a specific piece of music. Future work could expand into ergonomics so that the instrument’s finger configurations are easier to play for a particular melody,” says study co-author, Emily Whiting, assistant professor of computer science at Dartmouth College, who is also a flutist of over 20 years.

From a computing methodology standpoint, the Printone interface narrows the computational scope of the tool, which could be otherwise daunting, by modeling the instrument as a passive resonator in which the oscillation from the mouthpiece is excluded, and focuses on the dominant tone to predict frequency resonance, rather than considering the entire frequency spectrum.

Through its computational acoustic simulation and interactive feedback, Printone allows for the creation of hobby-grade wind instruments in unique 3-D forms, which can then be printed on commonly available 3-D printers.