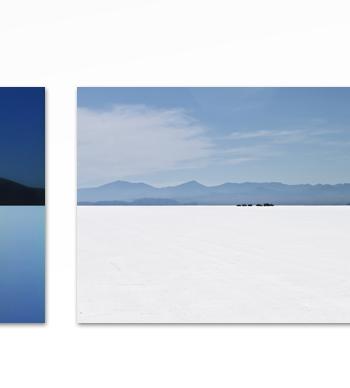 A multimedia artist working in a single medium, sound, somewhat defeats the purpose. Significantly, the CD packaging for Presence was a thing of beauty, as if to make up for the lack of visuals elsewhere.

This time, Novak gives equal prominence to the visuals, and equal billing to his collaborator Robert Crouch. The Fata Morgana artworks come in diptychs, the left one painted by Novak, the right by Crouch. The soundtrack has many elements that are immediately recognisable from Presence, but has an electronica aspect, and musicality, that are Crouch’s.

Novak points out that the synth modulations on the soundtrack are mostly performed by Crouch, but beyond the specifics of who did what, there is a collaborative element to the music that suggests the less tangible aspects of teamwork. Throughout the album there is an interplay, a sonic narrative that is woven into the structure of the project, that is dualistic in nature.

That interplay is between the human and the inhuman, the living and the inert. Big concepts of course, but with a natural and unpretentious subject as medium. Fata Morgana refers to an optical illusion, an uber-mirage, in which light is refracted by a body of warm air in the lower atmosphere, and produces images of distant objects. The phenomenon occurs most often at sea or over deserts, and can reflect the image of buildings, ships or vehicles which would otherwise not be visible due to the curvature of the earth.

In Fata Morgana, the artwork, those ghostly images are at once human and inhuman (a reflected wagon train conveys the image of life and humanity, but is illusory nonetheless). Whilst the paintings evoke the sterility and vastness of the Utah salt flats, it is in the soundtrack that the ghostly, half-heard presence of life whispers in and out of the otherwise daunting and oppressive landscape.

Novak and Crouch work from field recordings taken at source (sound, photographs and video) then process them at their Los Angeles studio into the final artwork. In the case of the soundfiles, one of the most evocative points is the closing radio dialogue, distorted to incomprehensibility, but nonetheless bringing a contemporary edge to an artwork which, visually at least, seems until then to refer to a Romantic-era phenomenon. 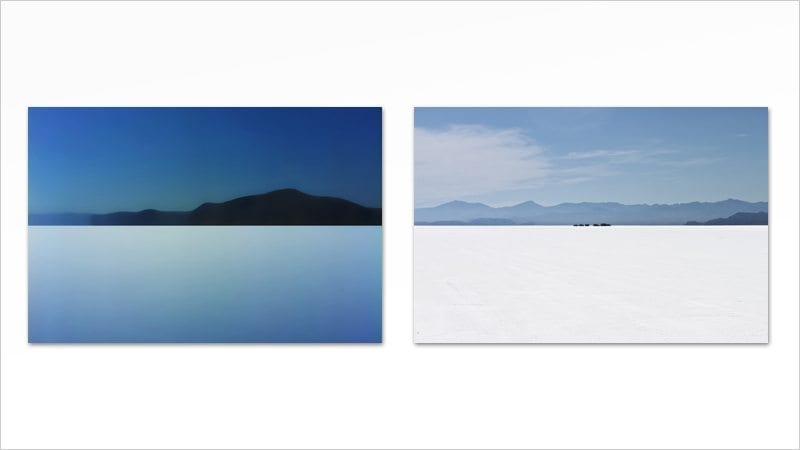 Fata Morgana, the soundtrack, consists overwhelmingly of wind noise, and a treble ticking sound as if sand were trickling over pins. These stretch out into a hazy tinnitus effect, almost the chirrup of cicadas on a hot evening, but periodically overpowered by those wind noises. About seven minutes in, modular synth motifs become overt, moving from hinted, mirage-like suggestions, to tonal and harmonic extensions.

Ironically, for an artwork that examines such starkly inhuman, inhospitable and featureless a landscape as the Utah saltflats, there is more detail and development than you might expect. Crouch’s modular synth work is an earcatcher, bringing electronica pulsations and tonal toplines to Novak’s brooding, powerful sonic foundations (which can be recognised from Presence), which are, frankly, eery.

Some eighteen minutes in there is a development –  rhythmic though sparse tenor motif in the upper range of a bass guitar and some augmented chords in the mid-range. It is an optimistic moment, heartening in the context, and soon eclipsed by the tinnitus glare of white noise that Fata Morgana uses to depict searing heat-haze. That narrative of human/animal presence ghosting in and out of the soundscape is sometimes melodic, sometimes a sound evoking a cricket’s chirrup, a rattlesnake clatter, modulated voices, synthesised drones, all subsumed by that overwhelming heat-haze/sandstorm effect.

In ways, the presence of lifeforms in the Fata Morgana soundscape is reminiscent of Joyce’s Finnegans Wake – in that rather than an overt description of a character, we are given hints to their presence, clustered into nodes in the text and linguistic suggestions. At times that life-element is portrayed in sounds that are near-orchestral. About half an hour into the soundtrack things are almost conventionally cinematic, with the modular synthesiser equivalents of violin/viola/cello sections pumping out atmospheric signifiers worthy of an art-house wistful contemplation scene. 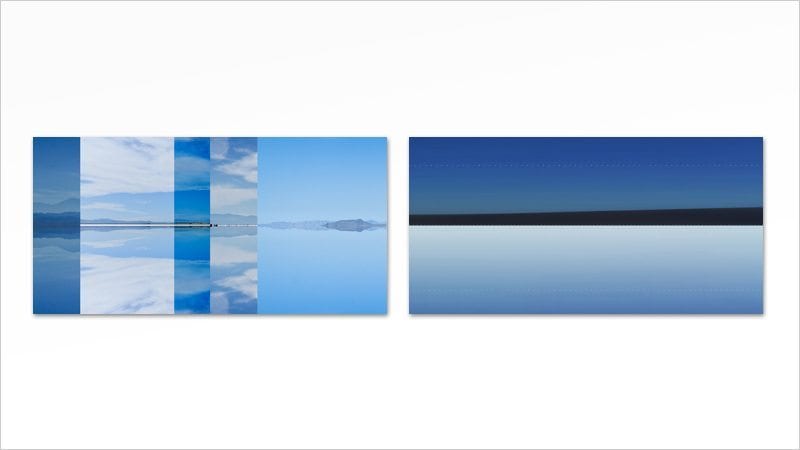 Poignant yet hopeful, as is the wont of augmented chords, and with a conventional bassline, the section moves into the realms of more established ambient music tropes. By the time an Orb-esque  jittering treble motif kicks in, it becomes obvious that a final phase has been reached. We are to imply a survival, a successful traverse – the narrative of desert versus human has consolidated in favour of human.

The daunting presence of sterile, hostile landscape remains, but has passed.

Novak and Crouch create a fascinating dialogue of sonic imagery and metaphor in Fata Morgana, the imagery more obviously in the visuals, the metaphor in the sonics. It is all the more accomplished for its compositional restraint – there is no bombastic drama here, as is fitting. There is no bombastic drama to deserts either. The matter-of-fact disdain for life that typifies human expressions of the desert is an anthropocentric creation, any hostility or contempt simply an attempt to apply human characteristics to an entity that is inert and alien.

There is no bombastic drama to deserts

Less acutely observed artworks have typically twisted that anthropocentrism into depictions of grandeur or majesty. Fata Morgana ends with just-heard human voices, modulated or simply in their original form to sound as if heard through crackling walkie-talkies.

They sound relieved, relieved to have survived.

Previous Story:
Saddlesore? Or too numb to even know?
Next Story:
Salute: A Tribute to Human RIghts Olympians