Total Recall, Cheese and Tofu: An elementary and culinary guide to not fretting about the remake

Like many, when the pre-trailer trailer of the new Total Recall was released I was incensed.

The very idea that something as purely gold as Total Recall could be re-made felt like a travesty. It felt like trying to recreate Tutankhamun’s tomb out of turmeric. Why bother? We, the people, will see it for the fake it is. And, simply, it will suck.

I had no reason to suspect such a sophisticated rebuttal would tumble. At the time the very idea of a remake was like a full-scale Hollywood intrusion into the crevices of my heart. It was an assault on everything I held dear – on experience, on art, on gold, and perhaps most importantly, on memory.

On Memory
Of course, when I had these feelings I didn’t remember that memory is a central theme of the film because all I could recall was cheese. Lots and lots of cheese.

Sure the cheese is overwhelming to the point where it’s difficult to remember much else, but that’s what makes the film gold, right?

Dystopias are serious, they’re about the world falling apart and the struggle to change before we get to the dreadful ‘there.’ It’s in this environment that Arnie comes into his own. He tempers that seriousness a little so it’s digestible to a wider audience. He adds a layer of cheese that is unforced. He’s not a hipster fitting in, he’s a body builder moving around. 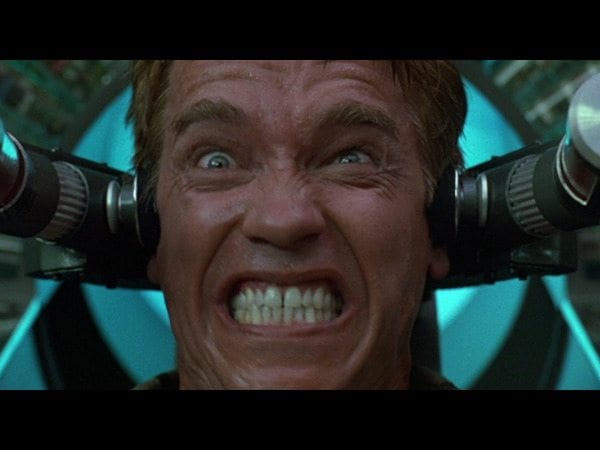 I’ve never had a problem with cheese. In proof of point, a couple of years ago I went to a very bad cabaret variety show with only one performance that I loved – a woman doing the Sharon Stone Basic Instinct drill in the dark with a brightly lit flashing merkin. (Take a moment to visualise that). Yes, some people thought it was tacky – I thought it was gold. Perhaps that’s why I loved Total Recall so much. I don’t have a problem with tacky. In my memories of Total Recall it was the indelicate application of cheese that made the film.

Re-Watch
It was in this spirit that I sat down for my first re-watch since learning of the travesty of the remake. 'What a film!' I thought in wonder, and silently started to count its merits.

The themes are as relevant as ever. The many guises of politics and power struggles. The mass media labelling freedom fighters as “terrorists.” It’s like lighting up a flashing sign that says: “This is What Propaganda Looks Like.” Look as it is discussed so seamlessly! I thought with pride.

More than anything else Total Recall launches the idea that “Anything We Can Do Technology Can Do Better” to its limits – applying it to something as personal, as human, as memories.

And, of course, I was also thinking: This movie isn’t cheese with green tomato pickle, this movie is tofu! Serious and healthy and a perfect base for sucking up the specifics. It’s like new age comfort food, like a tofu scramble!

In this scenario the dystopia is the tofu and Arnie the scramble that makes a suspicious product more presentable.

Smothered
Then, inevitably it seems now, the absurdity hit me hard.

Barely ten minutes into the film and there was Arnie – an enormous body builder with muscles that look like they belong on the cover of an Italiano staliano romance, not a construction site, acting (it hurts me to say this) pretty appallingly, and mucking about with a jackhammer. Probably on a piece of painted foam.

It sucks. It’s distracting. I want more green tomato chutney with my cheese. Fuck it, I want the tofu scramble back. But it’s gone ….

The tofu is the material, the context, the message. The tofu is the story and there I sat, watching the tofu being smothered with cheese before my eyes. A tofu scramble is one thing – some firm tofu crumbled with onion and garlic and diced vegetables, sauteed with a touch of turmeric for colour, salt and pepper and herbs to taste, perhaps even served with a little grated cheese on top. I’m not opposed. Smothering the tofu in cheese so it becomes a big congealed mess is another thing all together though. I don’t want to suggest that cheese is bad, but who wants their tofu covered in it? 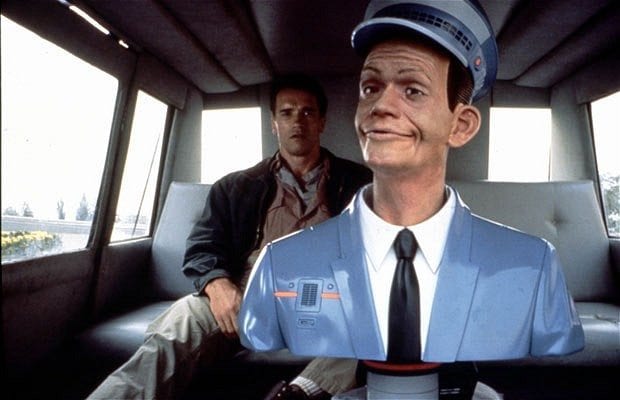 And this is the trouble with Total Recall: it is a brilliant story, but the brilliant story is barely visible through the layers and layers of cheese.

Which brings us to the short story the film is based on – “We Can Remember it for You Wholesale” by Philip K. Dick.

Philip K. Dick? Didn’t he also write “Do Androids Dream of Electric Sheep?” Isn't that … Blade Runner?
Because, of course, Blade Runner is not cheese. Blade Runner is something hard-core delicate – like ninja knapsack food sustenance.

If Total Recall is tofu scramble smothered in cheese, then Blade Runner is spicy tofu perfectly wrapped in seaweed with a piece of cool cucumber slipped in for efficient hydration. Satisfying, transportable and sophisticated.

By coincidence I re-watched Blade Runner a couple of weeks before re-watching Total Recall. Blade Runner outlives its era. It does’t feel old or dated. The fashion doesn’t stand out or stand in. The technology is seamless. The mis-en-scene is striking and clean. It doesn’t fade.

Total Recall on the other hand never left its era. It was released in 1990, eight years after Blade Runner, yet it has 1980s written all over it. The technology is clunky. The eighties aerobics outfits are garish. The total lack of ambiance is lazy. It will never transcend. 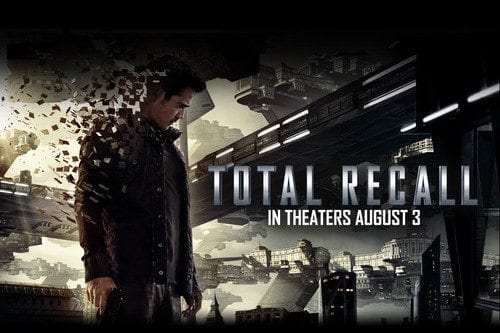 Why such dramatic differences? The question never occurred to me until my very insightful boyfriend suggested that the budget for Total Recall went on Arnie.

Revelation
And that is how I learnt that Philip K. Dick’s great story got covered in cheese, dressed up with turmeric, and made to look like gold. That is when I understood that Total Recall could be like Blade Runner and that doing it right might just be the motivation for the remake. Perhaps the remake will be smooth. Perhaps it will be tight.

Perhaps it will be tofu.