A kidnapped banker, an some escaped fairies and a body of work that has sprung from a duo of artists who’ve collaborated since childhood….

Until the 19th July, artists Tinsel Edwards & Twinkle Troughton will present their first ever Mini Retrospective, a rare opportunity to see a large selection of works by the dynamic art duo. I interviewed the exciting pair to find out a bit more about their work and what makes them tick….

The first thing to catch your eye about the show is that Tinsel and Twinkle have kidnapped a banker, holding him to ransom for the duration of the private view for their exhibition. It’s not the usual sort of premise for an exhibition, and it promises to create a fair amount of debate and thought around the issue. A strong thread running throughout their work – both individually and together – is their ability to question and challenge social and political issues, sometimes playfully in typical cheeky style, and at others thoughtfully and subtly.

I am intrigued to hear that bespoke 'Tinsel and Twinkle' bank notes will be handed out to the public during the opening of their show. Guests will be asked to respond to the global economic crisis by writing their solutions, opinions, emotions and thoughts onto these bank notes. The money will then be pinned around the banker forming an insightful display. Have your say and become part of it this Thursday at A-side B-side Gallery.

This is the first retrospective by the art duo and is also an amazing opportunity to see a large cross section of their work, including previously unseen pieces, and a selection from the back catalogue. This is also a chance to re visit previous art stunts – Tinsel and Twinkle as Traffic Wardens giving away free art, and the wonderfully acclaimed 'Opinionated Objects'. There is often a theme of interaction the audience during the artists’ exhibitions and happenings. I wanted to find out more so I put some questions to the artists:

Nicola Anthony: You asked for input from your visitors and collected their opinions on the bank notes you handed out. The idea of engagement fascinates me and I would love to know how you feel it adds to the show and has made your work unique in the past.

Insight to other people's experiences is a really fascinating subject

Twinkle Troughton: To me, to have an element of interaction means that you are not just telling your own opinions to an audience but creating a dialogue with them. As an artist you get used to constantly putting your own ideas out there, so by asking for thoughts and opinions (for us it's on generally political matters) you create a space for other people's thoughts to be expressed which is outside of a political environment. It’s a creative setting meaning people can be playful with their expressions or emotive or knowledgeable without our judgment. Insight to other people's experiences is a really fascinating subject. It could just be that I’m very nosey about what other people think but I genuinely feel it's important to know about other people's plights, solutions, ideas and inspirations. It's how we learn. I also love a good debate and so it's the perfect starting point for that really.

Tinsel Edwards: The artwork that myself and Twinkle make is often opinionated, but we also want to find out what other people are thinking too! We recognise that the political commentary we offer through our art is just one voice, and we want to involve the voice of the public as well. This Thursday, 'Kidnapping a Banker' took place and it focused on the economic crisis, a situation which is forefront in the media and political debate. Perhaps people don't have time to write to their MP or don't want to voice their opinions at a dinner party – the creative arena gives people the opportunity to offer honest or emotive responses and to open up a debate.

NA: Did you have an idea of how it would play out at the event? Has there ever been an occasion when something unexpected happened?

TT: We do tend to have an idea of what we think we are putting together, but whether events turn out as we plan we can never be sure of. You can't guarantee people want to partake for starters! Or that people will even like the concept! But you have to believe in the idea and just go for it, so we have been really fortunate with the response and participation we've had from people with Kidnapping a Banker, Opinionated Objects and the Traffic Warden piece.

TE: As Twinkle says we have an idea of how we imagine it will turn out, but you can't guarantee anything! We were pleased that lots of people engaged with the piece, the audience interaction is ultimately what it depends on!

Tinsel and Twinkle’s record label 'Pushing Pussy Records' and associated paraphanalia will also be on display alongside documentation of 'The Fairies Band', a band they performed in, wrote music for and went on two New York tours with. It thrived between 2001 and 2007. 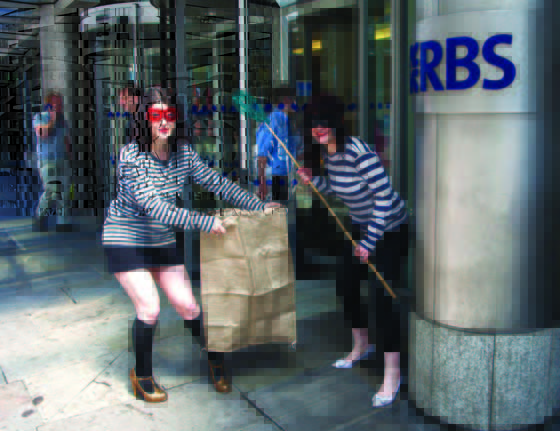 The artists have chosen to present their 'mini' retrospective fairly early on in their careers. The works on display will offer an insight into their individual artistic concerns. Social and political themes dominate the show, illustrating their quest to highlight, expose and question, bringing contemporary issues to the forefront.

Tinsel & Twinkle met when they were 9, over a pot of poster paints at their first school. Since that fortuitous meeting they have spent years collaborating and exhibiting their art works including identical degree shows at their universities, Tinsel was at Goldsmiths and Twinkle at Kingston. They work as individual artists but sharing a history and similar creative concerns, they often join forces to collaborate on projects and exhibit together.

works which question and challenge social and political issues

Tinsel's passionate ideology as an artist is rooted in a desire to create works which question and challenge social and political issues. Her commentary is a personal response, incorporating text into her paintings the works are littered with action statements, personal mottos, questions, observations and anecdotes.

Twinkle’s work has been inspired by social political issues in Britain both now and as it existed decades and centuries ago. Recently her work has become more universal in it's consideration. Often satirical and usually political, the content carries dark undertones and attempts to shine a light on where the Human condition repeatedly remains in the dark.

All of the original works in Mini Retrospective are for sale, as are limited edition prints. 10% of all sales will go to Shelter.