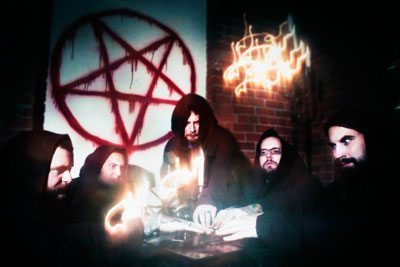 For their fifth studio album, Detroit heavy weights The Black Dahlia Murder have remained true to what they do best. Namely blasting out high energy, heavy and powerful melodic death metal.

The album follows the upward trend in quality the band have been following over recent releases and should see them continue to attract new fans while keeping the old faithful happy. According to vocalist Trevor Strnad speaking via their record label,

'What’s the most quintessential Black Dahlia Murder thing we can do?’ That’s kind of what we set our foothold in.

The result being Ritual, the first album in recent years the band claim not to have been written almost solely by co-founding member Brian Esbach, which has been credited to new guitarist Ryan Knight’s influence. Again speaking via their record label Esbach observes,

It’s been more collaborative than it’s been in years. The last two albums I wrote most of the music and this one it’s almost a 50-50 effort between me and [Knight].

Where this shows most is in the fluidity of the songs, each part fits with the next creating a flow through each song and indeed the entire album. The beats laid down by drummer Shannon Lucas are a major cog in this respect propelling songs along at a frantic pace without resorting to pure blast-beats the entire time. ‘The Window’ being a great example of blasting through the verse before evening out to a more traditional heavy metal beat during the chorus before providing a looser feel to back the luscious guitar solo. 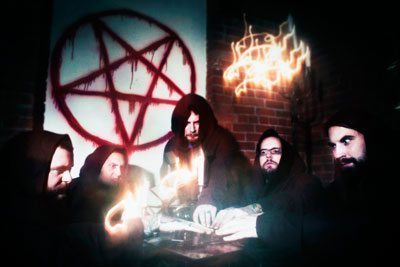 The trolls of the internet have often saddled the band with the label of deathcore, in a negative way, but this tag doesn’t really apply to the band, and most certainly not to Ritual. It is most likely that this has arisen from the band’s image, and we all know never to judge a book by its cover, right? The most clear influences present on Ritual are bands such as Carcass, At The Gates and Morbid Angel with the resulting mix best described as melodic death metal. The melody is provided by the guitar leads and used extremely well throughout the album providing counterpoints to death growls and shrill shrieks of the vocal delivery. This approach is brought to the fore on ‘Moonlight Equilibrium’ with a melodic guitar line underpinning the bridge/chorus and face-melting but tasteful solo adds plenty of colour and depth.

‘Malenchantments of the Necrosphere’ contains a wonderfully hooky refrain at the climax of the song featuring well timed gang-chants echoing the lead vocal shouts which are custom made to draw the audience closer in a live setting. ‘Carbonized In Cruciform’ provides a slight departure halfway through the album, bringing in some black metal influences with tremolo guitar riffs and a pained vocal delivery. The guitar solo on the this track is one of the most accomplished on the record simply by not throwing notes out in a blur of speed, but adding a further layer of melody.

Where the band have stretched out most is on closing track ‘Blood the Ink’, which contains a string backing section while the band up the brutality levels and introduce a legato solo based on pure speed, echoing the classical strings with its own neo-classical approach.

The Black Dahlia Murder have managed the clever trick of maintaining the sound that has served them so well up to this point (previous album Deflorate reached the band’s highest US chart position of 43), whilst bringing in new elements helping them to appeal to a wider fan base. The songs are more focused and the album hangs together as a whole and is definitely greater than the sum of its parts. The standard of musicianship is high but does not dominate the record, a strength that shows the bands experience and maturity.

Previous Story:
On “The Issue Of Character” And Empire