Syd Arthur : On and On 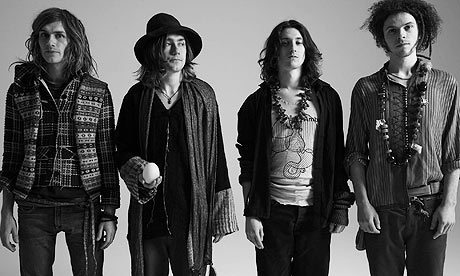 There’s the Syd Barret reference in their name, as well as a typographical similarity between the A for Arthur on their album cover and the light-refracting prism that graces the sleeve of Dark Side of the Moon. It’s there in the music too, particularly in the paroxysms of self-indulgent guitar noodling and fluttery flute motifs that see out  the second half of the closing epic ‘Paradise Lost’. Which is no bad thing at all, despite the more usual use of the phrase ‘self-indulgent’ to connote a distasteful narccisism.

Syd Arthur – Edge Of The Earth from Syd Arthur on Vimeo.

On an On displays a great deal of musical self-indulgence, from an almost-obnoxious dexterity with guitar, violin, bass and drums; a vocal approach which takes a fairly standard, fine-grit gravelly rock voice, but wraps it around a very baroque style of phrasing (strangely evocative of Hue and Cry’s Pat Kane); to lyrics which owe more to a grailquest role-playing game than to the usual staples of love, lust, loss and liquor that populate the rock/pop mileu.

an almost-obnoxious dexterity with guitar, violin, bass and drums

Which again, would usually be the signal for critics to sharpen their metaphorical knives and shred the album to a fine tartare of shattered pretensions and a slew of ‘only doing it for the fans’ FaceBook updates. Except that in this case, On and On is a damned fine album.

It’s unfair to place too much import on the fact that one of the bandmembers (violinist Raven Bush) is a nephew of Kate Bush. Without that information being public realm, it’s doubtful that any parallels would be drawn. With it, however, it’s just too tempting to hear Liam Magill’s fine diction and approach to vocal phrasing (intense and compact passages of tightly-packed syllables interspersed with longer, rounded out, more languid responses) and presume influence. Whether it is a style inherited from auntie Kate or not, it is certainly one of the reasons why Syd Arthur force the listener to give On and On a degree of attention that a more commonplace alt-rock record wouldn’t warrant.

Certain common elements join that deftly-phrased vocal throughout the album. A densely-packed soundfield, crisp lead guitar, violins both plucked and bowed, busy percussion with an emphasis on dance-music influenced high-hat scatters. There are shifting time signatures, tempo changes, and an approach to song structure and arrangements that goes beyond the classic pop/rock verse-chourus sequence. Not to say that there are no discernable verse-chorus sequences, but there is usually another part to the songs, either an extended bridge, or a second bridge, an extended outro or Franz Ferdinand-esque complete change of tempo or tone at some point in the songs. 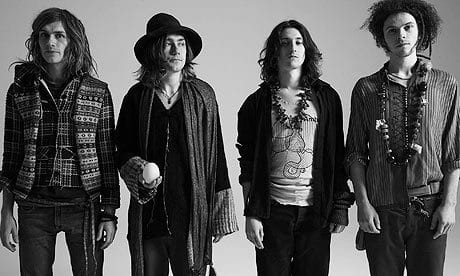 Hence, the band have been likened to the preceding generation of Canterbury prog/psychedelia experimentalists from their own hometown. It’s a touch spurious – it’s not certain from their sound that Syd Arthur seek to continue any East Kent musical traditions as much as that math-rock, jazz and prog have been deep influences on their sound.

‘Ode to Summer’ has proved a festival favourite, combining a jazzy swing with a confident and distinctive processed vocal. There is a nice harsh/soft contrast between the sweetly swinging chorus and a harsh instrumental commentary on the verses. That mirrors the lyrical dialogue between summer and winter that forms the song’s theme. As befits a Canterbury band referencing the grail myth in their name (let’s say nothing of the Buddha reference for now, doesn’t fit), there is something of the madrigal to ‘Ode to Summer’ and it finds its way under your skin very quickly indeed.

you can’t argue with ambition

The flower-child, Laurel Canyon tone, crystal-clear vocal and old-time waltz time of ‘Dorothy’ manages to be wistful without being mawkish. It’s an ambitious track, referencing Brian Wilson harmonies, including a fade/reprise section to finish and some backing vocals that are almost over the top. But you can’t argue with ambition, or with a band who set up musical expectation with string builds, guitar solos, vocal setups, but which thwarts those expectations almost as often as they fulfil them. For all their prog stylings, Syd Arthur are certainly conversant with the experiments in build/drop; tension/release composition that have been going on recently in dubstep and drum ‘n’ bass. Either that or they fluked it.

Those tension/release dynamics are especially evident on ‘Moving World’, which builds instrumental elements and tempo from a slow, restrained start to a full-on attack. ‘Night Shaped Light’ brings George Benson style damped jazz guitar and syncopated high-hat rhythms to a song which allows guitar and violin to build the crescendo rather than the vocal, which doesn’t reach beyond a whisper. Again, where you would expect a huge vocal onslaught, there is restraint instead.

Syd Arthur have fun with thwarting that expectation across the album, putting the big vocals into unexpected settings, like the folksy ‘Ramble On’ atmosphere of ‘Truth Seeker’. A snippet from ‘Promise Me’ is typical of the lyrical tone of On an On:

‘Where’s the flood to tempt me into the garden of greed?
Oh to the mountain it crumbles, to the ocean it tumbles’.

Dungeons and dragons, certainly, but endearing with it. That, the backward-tracking that sees the album out, and the gong-crash on the intro to ‘Black Wave’ typify the relaxed folk-hippydom of Syd Arthur on an album which is just on the right side of overambitious, but that is anchored by a) solid musicianship, b) charismatic vocals and c), a gut-felt ability to maintain swing/soul/groove/feel despite busy arrangements and unconventional song structures. On and On doesn’t strive to be avant-garde or exclusionary, but it is clever, confident and artistic. And very good.

And theres a GONG! Hooray! 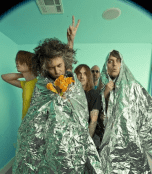