Every festival draws a downpour – even in Southern Australia. Womadelaide’s dreich day.

[dropcap style=”font-size:100px; color:#992211;”]S[/dropcap]unday morning, with a nice new pair of heavy duty gels on my plates of meat, we strode forth ready to do battle with the ground.

Sunday was the day that it had been predicted to rain. Between 5 and 15 mm, which is a lot. I woke to high winds, and some nasty squalls punctuated the morning. It seemed pointless to go too early since it was raining, and even at midday we had to wait some time in the car until it stopped.

It continued to spatter on and off through the afternoon.

Nhatty Man and Gara on stage 2 represented what was coming to be something of a 2017 formula. Horn section, massed percussion and an energetic frontman playing in an Afro/reggae influenced space. Nothing wrong with that, but you have to have a certain something to rise above the pack. Although the band had some talented players, Nhatty Man seemed a tad full of himself. His exhortations to the crowd that they had better get more enthusiastic because the group had been headlining some shows and getting great audience response seemed a bit conceited and was unnecessary. A great band should be able to 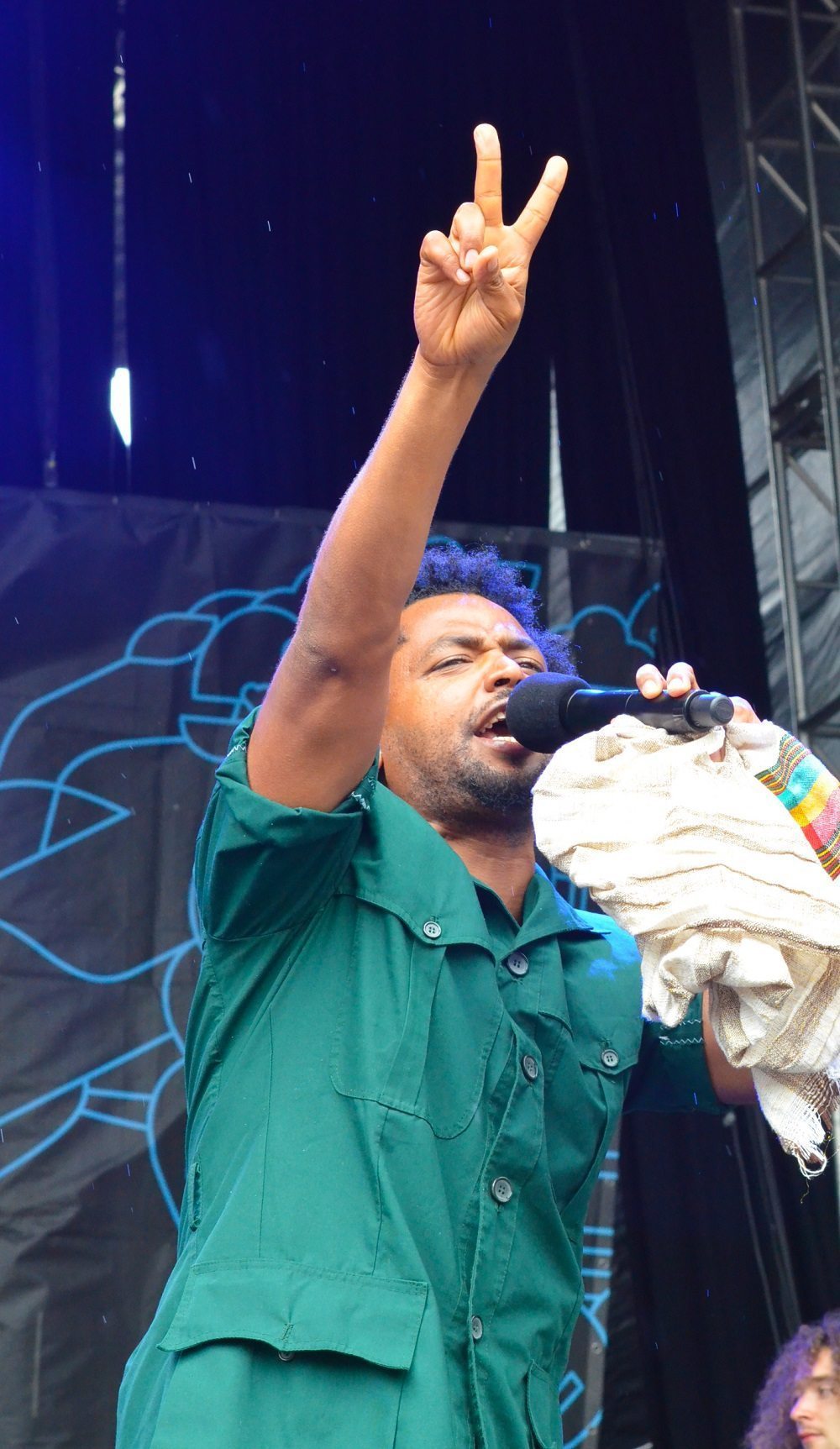 drag the audience out of their apathy.

The best portions of the set were when Nhatty (pictured) gave his musicians their head and they flung themselves into a lengthy jam where freeform horns warbled nicely and the percussion and guitar intertwined to good effect. A very good band, but given that their front man is not all that likable, not a great one.

After Bokante’s great set, it rained. HARD. I hid behind the big foundation stage sound board which was zipped up tight and remained dry, but to walk to Archie Roach would have seen me drenched, so instead I took shelter under a Morton Bay fig near the Holy Cow, along with a Japanese woman using an Macbook, some kids attempting to scale the tree, and older folks just sitting watching it rain. It was a nice interlude, with little wind, so the rain came down straight. It could have a been a lot worse. Hot 8 Brass provided an accompaniment (I particularly enjoyed their version of ‘Papa Was A Rolling Stone’) and when the rain slowed, their set was finishing up. The audience loved their energy and personalties, they got a great response on stage 2.

There was only one traditional Indian/Pakistani act this year… Sudha Raganathan. Some of my favorite Womad moments have been the late Friday night sets where masters such as Ustad Ali Khan and Zakir Hussein finished off proceedings with wonderful flowing improvisations which seemed to last forever and took one on a journey to the ends of the cosmos. This no longer takes place. I wonder why?

Anyhow, Ms Raganathan was a worthy exponent of her art, but not an outstanding one. After half an hour I abandoned her and went to see Ana Tijoux (pictured).

She didn’t quite hit the heights of her earlier show and seemed to realize it, leaving the stage fairly quickly despite calls for an encore and a few minutes left in which to undertake one.

Somehow I managed to go through the entire four days and missed every example of the roving performance acts that had returned after a long absence. A pity, as I know they were highly entertaining. Pith hatted explorers mounted on dodos; pompous huntsmen on chubby pantomime ponies, and giant bulb-headed men in suits. They must have been collectively avoiding me.

DD Dumbo has a silly name, but his music is much better. With quirky choices of instruments, he deserved a better audience, as a number of the younger things down front didn’t seem all that interested in listening to him. I noticed this phenomenon with most of the acts that were chart-related. Quite possibly these are people who attend specifically to see this act and may not have experienced the festival when young. They are in the minority, but they can be painful if you are standing next to them. At least you can usually move to a quieter spot.

Sinkane were another band who fell into the ‘good but not great’ bag: similar horn percussion lineup, but without the striking personalities or vocal boost that other bands in this genre had in spades.

The organisation were using a large digital screen to project visuals of the acts at the foundation stage. This was all I saw of Bebel Gilberto, who sounded smooth and slick and presented the sort of lounge room flamenco that I avoid like the plague.

Ainu Dub hit the nut though. Deep dub space generated by electrified traditional Japanese instruments is much more to my liking and Ainu is sufficiently talented to avoid becoming boring, which some of the other ‘electric to traditional’ acts such as Tinariwen haven’t always managed to achieve due to a rather repetitious repertoire.

My feet were now somewhat restored due to my gel pads, so I was able to watch most of the Dub set with less discomfort. I did have to leave early to get a decent position to see the Phillip Glass Ensemble present their live performance of the sound track to the 1982 film Koyaanisqatsi – Life out of Balance.

Well, if life was out of balance in 1982, it’s even more so now; the ensemble played the relentless mesmerizing score to perfection. As the sped-up vision of freeways, assembly lines, space rockets, subway passengers, pedestrians, meat packing and millions of humans mindlessly rushing towards… (their doom ?) unfolded, I mused about whether we will survive this collective insanity or not, especially given that the ‘leader of the free world’ is busy reversing any of the measures that his predecessor took to ameliorate the worst of our follies. 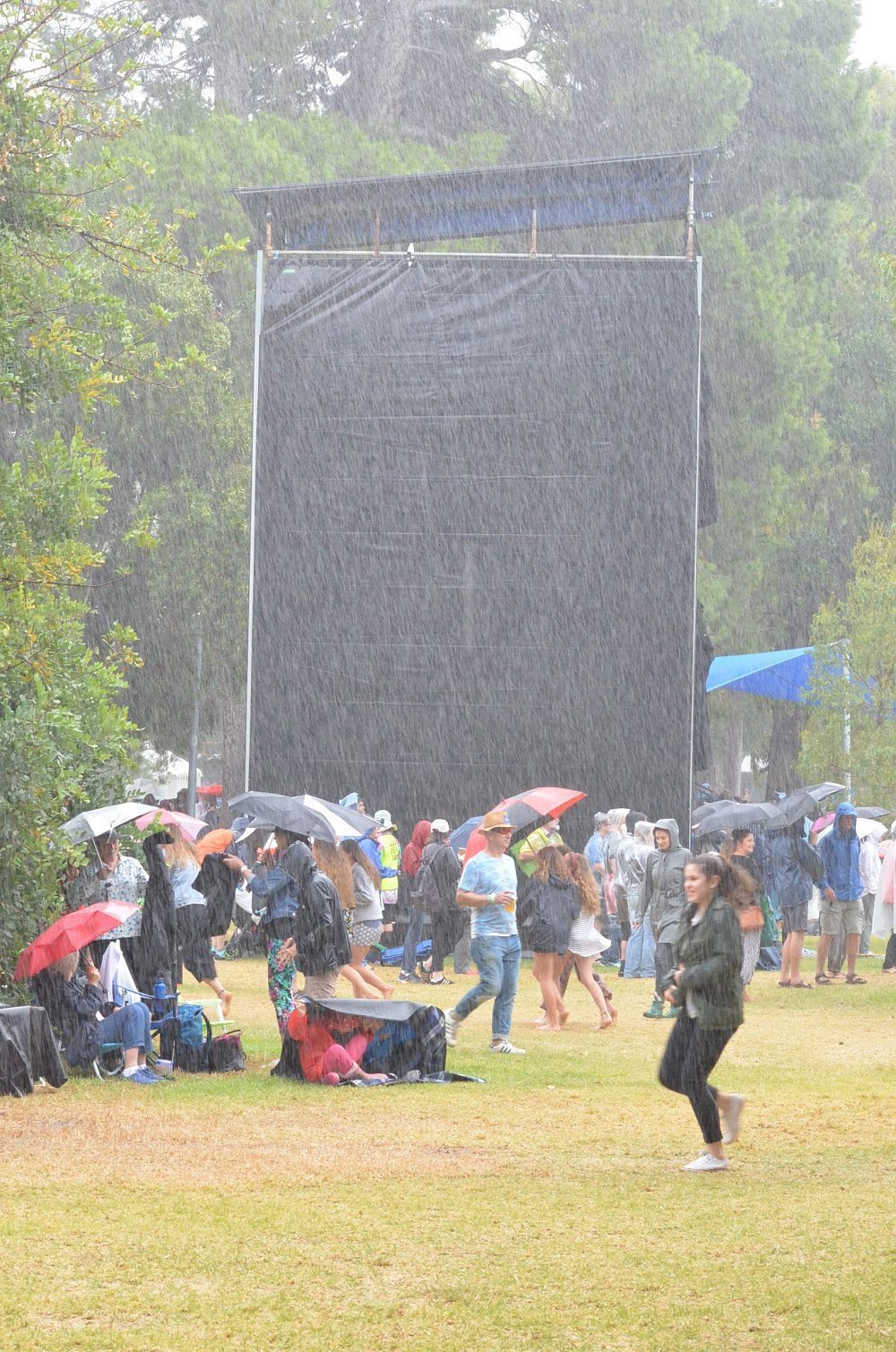 It was a sobering experience, marred only by bass bleed clearly heard during the quieter passages. This was emanating from BWG on stage 3, a poor choice to have run simultaneously to one of the major acts.

I was supposed to go see Parov Stelar, another ‘one off’, but tiredness and the desire to see Welsh outfit 9Bach who were playing their last set of the weekend prevailed. Nice to hear Welsh accents again, and the band has some very pleasing aspects to their sound: good vocalists , and an innovative guitar player, but they were not inspiring enough to watch for an hour. Fatigue prevailed, it was time to call it a day.

Next Story:
Shell Beans, Not Schools: In Search of the WIld Fava Bean