Stuart Forbes on Richard Rogers, Architecture and the Grand Process

[dropcap style=”font-size:100px; color:#992211;”]T[/dropcap]hrough his work with Richard Rogers and now leading SFA, Stuart Forbes has been at the heart of many large commissions that have made an impact on skylines around the world.

Despite having some impressive credits to his name (Heathrow Terminals 1 and 5, Kabukicho Tower, the Millennium Dome), Forbes’ approach to architecture is defined and refined by the human experience and by a process of enquiry that reveals in stages of completion the growing frame of a building. Walking into the SFA (Stuart Forbes Associates) offices near Putney, the clear lines and beauty of the layout is festooned with sketches, models, swatches, material samples. Deep in the grotto of creative choices Trebuchet found Stuart Forbes cheerfully making grand choices.

What building piqued your interest in architecture?

I want to say that it was something outside of [my work at] Richard Rogers [now Rogers Stirk Harbour + Partners], but unfortunately it wasn’t. It was the Lloyds Building. This was the galvanising of the reason why I ended up being there for fifteen years and loved it. It was my first journey to the original Lloyds of London and it was walking around there that cemented architecture for me. It was the first time I’d really looked at a building and thought, “I know this is a kit of parts.” It’s all supposed to be mechanised, and made for manufacture. It’s amazing when you look at it and think every detail is a brand new detail, it’s a brand new piece of manufacturing, a brand new piece of fabrication and it’s all been designed by an architect. Admittedly, one working all the hours God sends to keep up with the production programme!

It was all made for manufacture, but the level of the comprehensive attitude towards everything being designed to be fit for its purpose… it felt to me to be a classic; you know, when you are looking at the staircase details or the handrail details or the pods for the toilets. The lovely sort of comparison with a lot of those pod technologies, which was in its infancy in those days, transferred into buildings but brought from another industry entirely – North Sea oil rigs! The technology was actually made by manufacturers that were making pods that were taken by sea containers to the North Sea oil rigs. When they were brought down into the modern-day building environment, into a contemporary environment, it was seen as being revolutionary, but all it was was a transfer of technologies.

And quite in context, given Lloyds’ history! 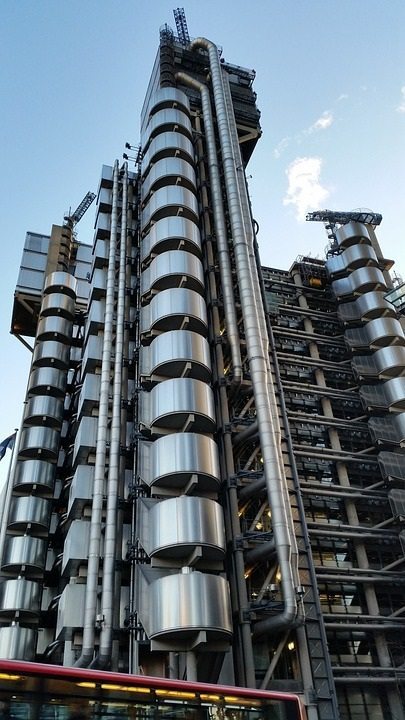 Exactly. I love the idea that even when you track the materials back through time, a sea container that would have gone to a North Sea oil rig suddenly finds itself in some London building. It’s still there, it’s a Grade 1-listed building now. Everyone thinks it’s a beautiful piece of work. Slowly, over the passage of time since it was built, you see changes in technologies or changes in belief in how one can best economise on getting this type of manufacture both fit for a purpose and on a building economically. So rather than transporting space, you transport flat-pack buildings. And then wall by wall, rather than a container which has a lot of middle volume which is just air that you are transporting on the back of a lorry. That becomes the sort of technology that goes into how a McDonald’s can be put up in twenty-four hours or something crazy. Within a very short space of time you’ve gone from a flat deck to a built building that is trading. In all those things there is a lovely thread of intrigue.

It sounds like there is the process of choice in how you’re going to kit it out. And perhaps it’s because of the homogeneity of McDonald’s environments that you can mass produce and deliver those buildings. For instance, I know that a big word for your firm is ‘delivery’.

You know, it makes me laugh that, I don’t mean it in a dismissive way, when you go to university, you go to a design college, you learn to be an architect and a designer and the creativity that stems from that is a whole bunch of different things that happen. Then some client comes up with a bright idea: I want to build something in this part of the world and it could be anywhere. The nice thing about that, the beauty of it, is that if you go to some far-out reaches of the world and if there’s only bamboo to use, then you use bamboo.

In my days at Rogers, we only ever used three materials: concrete, steel and glass. There was never a brick that was used by us. Certainly not a pan tile or anything silly like that. It was a flat roof and that was it.

Previous Story:
Broccoli: Love it? Hate it? Shut Up and Eat It.

Next Story:
Winnowing the Chaff for Improved Planet-Hunting